The second session of the field school was held from 30th May to 17th July, 2013.   The Royal Academy of Cambodia was this year’s partner institution for the Archaeological Field School.  The curriculum included lectures, excavation, field trips, and laboratory training. Lectures incorporated broad topics—having to do with the historical, economic, and cultural impact of intra-Asian interactions—as well as specific instruction about the analysis and interpretation of Chinese and Southeast Asian ceramics as the most important source of data for the study of this topic. The teaching staff for the training program included prominent researchers from Cambodia, Singapore, and the United States.

In Singapore, students visited local museums and participated in a photography workshop. In Cambodia, students assisted in the excavation of an ancient kiln site at Cheung Ek, near the capital city of Phnom Penh.

There were 37 applicants to this year’s field school session; 12 individuals were selected from the pool of applicants (2 from Cambodia, Indonesia, Singapore, Vietnam, and the United States; and 1 each from China and Japan). In addition, 2 Cambodian participants also attended the Cambodia segment of the field school.

The field school was officially opened by Dr. Ooi Kee Beng, the Deputy Director of the Institute of Southeast Asian Studies and Head of the Nalanda-Sriwijaya Centre on the 30th of July 2013 at Seminar Room III, in Singapore. Participants were welcomed by A/P John Miksic, the head of the Archaeology Unit.

The Cambodia segment was opened by Phon Kaseka, the head of the Archaeology department at the Royal Academy of Cambodia, on the 2nd of June, 2013.

In Singapore and Cambodia, the participants attended a series of lectures designed to provide them with a working knowledge of the background to the current state of Southeast Asian archaeology as well as on Southeast Asian pottery and kiln technology (see “Recorded Lecture: Ceramics, Technology, Trade, and Culture in Southeast Asia” by A/P Miksic). Members of the Archaeology Unit, such as Dr. John Miksic, Mr. Kwa Chong Guan, Dr. Goh Geok Yian, and Mr. Lim Chen Sian, all gave lectures.

ISEAS Archaeology Unit (AU) staff, together with Cambodian colleagues, conducted field study trips to the National Museum of Cambodia, and to sites outside of Phnom Penh such as Udong (an ancient capital of Cambodia) and the Cheung Ek Genocide Center.  The participants were also introduced to the Cheung Ek area by doing a walking survey of several ancient pottery kilns in the area, as well as a modern brick kiln.

Instructors at the Cheung Ek excavation included Dr. Chhay Rachna (APSARA Authority), Mr. Heng Piphal, Mr. Hoeung Sothearos, Dr. John Miksic, and Dr. Goh Geok Yian.  The field school also provided an opportunity for the participants to understand the results of the excavation, as a public lecture was given by Mr. Phon Kaseka on the 17th of June, 2013.

The closing event of the field school consisted of 15-minute individual presentations by the students on their personal experiences, their insights about Inter-Asian Interactions gained from the field school, as well as the impact of the field school on the trajectories for their own future research and contribution to Southeast Asian archaeology and scholarship. Participants were also required to write a report on their own work performed at Cheung Ek. 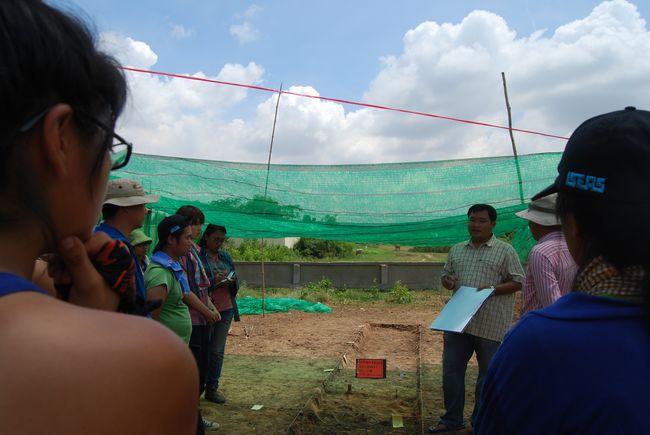 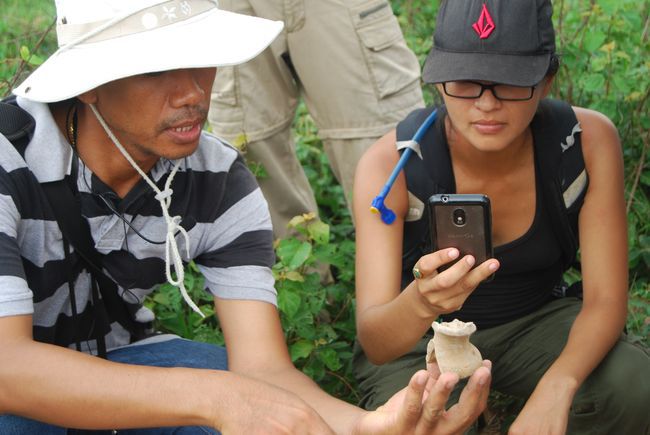 Dr. Phon Kaseka (Royal Academy of Cambodia) showing off a piece of pottery to students during a site survey tour at Cheung Ek, near Phnom Penh. (Credit: S. T. Foo) Mr. Phon Kaseka and Mr. Hoeung Sothearos from the Royal Academy of Cambodia at the opening session of the Cambodian segment in June 2013. (Credit: S. T. Foo) Students attending a photography workshop by Mr. Ung Ruey Loon, a professional photographer who is based in Singapore. (Credit: Do Truong Giang) 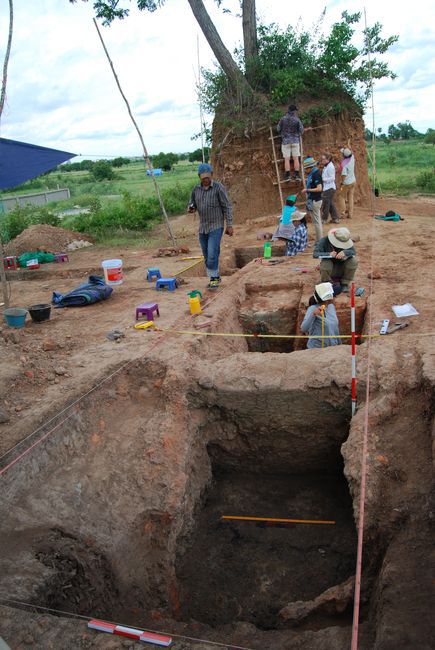 Students drawing profiles at Cheung Ek. Pictured in the foreground is the one of the fireboxes of the kiln. (Credit: S. T. Foo)