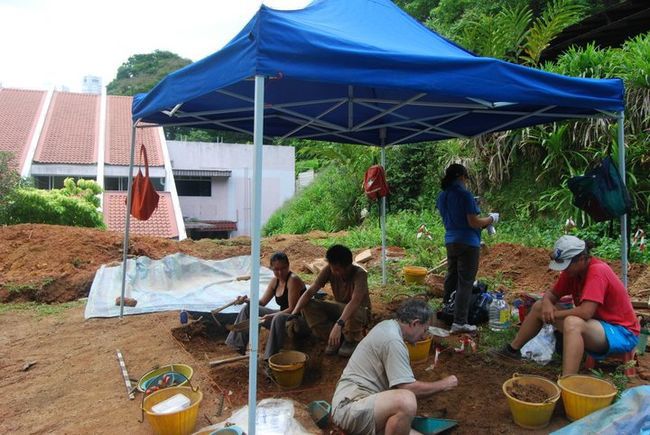 The Spice Garden excavation took place at Fort Canning, Singapore, between mid-April and early May 2010 with support from the National Parks Board (Nparks) and Nanyang Technological University.  This rescue excavation project was deemed necessary as Nparks intended to build a ramp for handicapped access to this area of the hill.  The site lies in a busy area of the park beside the Registries of Marriage, the Fort Green, and a major outdoor archaeological excavation next to the Keramat Iskandar Shah, where thousands of 14th-century artifacts have been found.  The Keramat Iskandar Shah site has been interpreted as a palace workshop due to the discovery of a large charcoal feature associated with iron tools, thousands of glass beads and globules spilled during the melting process, small fragments of gold, and clay crucibles.

As the Spice Garden site had not been previously been explored for its archaeological potential, the researchers were initially unsure as to whether it had been greatly disturbed by previous developments in the park, or whether the investigations would yield new and significant information for the area.  The excavation led by Dr. Goh Geok Yian yielded a large quantity of 14th-century remains, mainly pottery, in an undisturbed stratum. A unique feature found during the excavation was a layer of sterile yellow clay with a depression consisting of dark soil dense with fragments of ceramics, including conjoining pieces piled on top of each other. This has been tentatively interpreted as a pathway with a drainage ditch in which refuse was discarded. 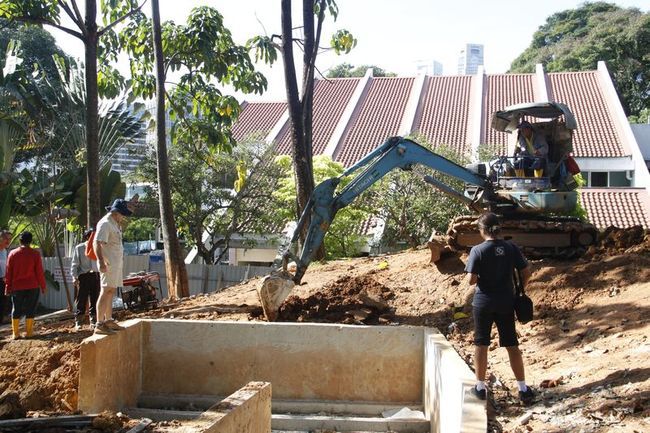 Dr. Goh and Dr. Miksic observing excavation by a backhoe provided by Nparks which stripped off the upper layer of soil from the 14th-century stratum. (Credit: Dr John Miksic)
Back to Project Listings