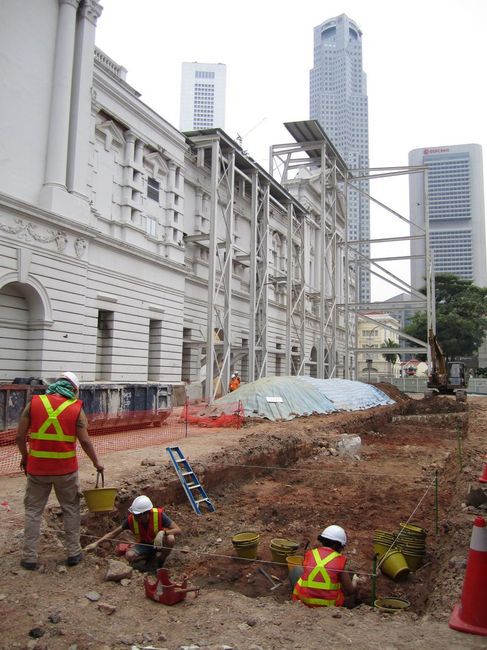 The Victoria Concert Hall is located on the northern bank of the Singapore River, and sits within the commercial heart of modern and colonial Singapore, as well as the ancient settlement of 14th century Temasek. Built in honor of Queen Victoria, the Victoria Memorial Hall (c.1905) was erected next to the old Town Hall (c.1862); a clock tower was later added in 1909 between the two buildings, and in 1979 the Memorial Hall was renamed as the Victoria Concert Hall (VCH).

In order to evaluate and explore the potential archaeological reservoir of the VCH site, a team led by Mr. Lim Chen Sian (SEASP, ISEAS) conducted a trial excavation in June 2010. The trial excavation yielded a significant amount of artifacts; enough to warrant a large-scale salvage excavation in September 2011 prior to further construction development. The team excavated a segment of the construction impact zone along Old Parliament Lane, recovering some 600kg of artifacts that would have otherwise been lost to the bulldozers. The salvage excavation was jointly organized by the Singapore Heritage Society, the Department of Southeast Asian Studies (National University of Singapore), and the Archaeology Unit (ISEAS – Yusof Ishak Institute).