Over the past three years, the ISEAS Yusof – Ishak Institute has been studying political, economic, and social trends in this province, with conferences held in 2017 and 2018. This third and final conference will examine: recent developments in the Riau Islands provincial government; evolving policy frameworks to attract foreign direct investment; and opportunities and challenges in three promising sectors for the province’s economy – tourism, shipping and logistics, and the digital economy.

21 November 2019 – Over the past three years, the ISEAS – Yusof Ishak Institute has been studying political, economic and social trends in the Indonesian province of the Riau Islands (PRI), with public conferences held in 2017 and 2018. With the dual aims of extending previous findings and sharing recent developments on the Islands, ISEAS’ Regional Economic Studies and Indonesia Studies programmes organised the third and final workshop that brought together a number of scholars to highlight some of the key political matters facing the province as well as economic performance of its crucial sectors. 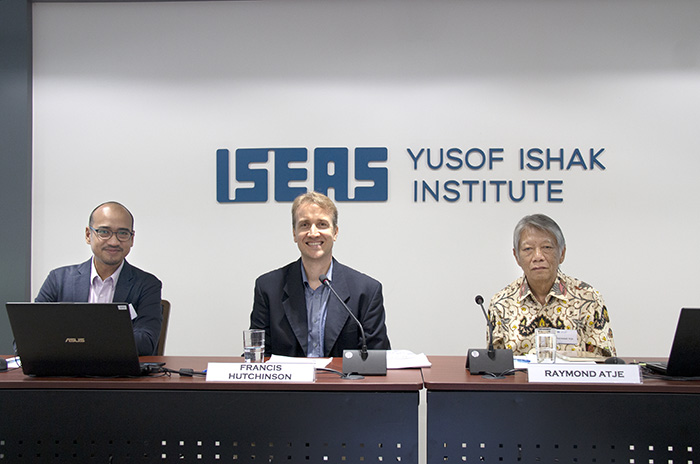 In his welcome remarks, Dr Francis Hutchinson, Senior Fellow at ISEAS, provided a brief background of the Riau Islands project, fleshed out the questions it sought to explore, and elaborated on the overall structure of the workshop.

Dr Hutchinson also moderated the first panel on political issues and policy matters. Dr Mulya Amri, Program Director at the Jakarta Property Institute, offered a historical account of the different economic, cultural and political factors that led to the formation of the PRI in 2002. This was followed by an overview of the state capacity in the province that included a thorough evaluation of the Islands’ prevalent political system, quality of democracy, public finance, competitiveness and economic governance, poverty, and human development.

Dr Raymond Atje, Senior Fellow at the Center for Strategic and International Studies (CSIS), then drew the audience’s attention to Batam’s investment policy framework. In addition to sharing a comprehensive analysis of the city’s rapid economic development since the establishment of the Batam Industrial Development Authority (BIDA), Dr Atje also focussed on the recent downturn in the Island’s growth performance. Despite the major setbacks, however, Batam’s future does not appear bleak, thanks to the continued inflow of investment in selective key sectors, he said. He also proposed the establishment of a free trade agreement between Batam and Indonesia, much as is found between Hong Kong and Macau on one hand, and China on the other. This would allow the freer flow of goods between Batam and the wider domestic economy, while still preserving the established free trade zone on the island. Dr Lee Hwok-Aun, Senior Fellow at ISEAS, chaired the next session. The discussion in this round centred on the current state and future prospects of PRI’s three principal economic sectors: tourism; shipping and logistics; and the digital economy.

Starting with tourism, Dr Siwage Dharma Negara, Senior Fellow at ISEAS, presented some recent statistics on the consistently growing number of international tourists visiting the Riau Islands. Tourism has not just boosted the GDP contribution of the accommodation and restaurant sectors there, but also absorbed large number of workers who were laid off due to the shrinking manufacturing sector. Dr Negara also spoke about the various national tourism programmes being developed to attract more visitors to Batam, Bintan and Tanjungpinang. He concluded his presentation by highlighting some of the key challenges that lie ahead of the sector, including inadequate spatial planning and growing security concerns.

With regard to shipping and logistics, Siswanto Rusdi, Director of the Indonesia’s National Maritime Institute (NAMARIN), explained the central government’s cargo policies for the Nusantara Belt, the Maritime Highway, and commercial shipping. Mr Rusdi also mentioned the Jokowi administration’s ambitious plans of developing a major port in Kepri and highlighted the disconnect between existing infrastructural capacity in the Riau Islands and national plans. Of particular concern is the lack of equipment such as gantry cranes to enable rapid loading and unloading of cargo in Batam’s Batu Ampar Port.

Dr Hutchinson then spoke about Batam’s expanding digital economy. Given its geographical proximity to Singapore, excellent telecommunications infrastructure, and attractive labour costs, Batam has quickly emerged as one of the most favoured destinations of a number of Singaporean firms in the digital space. The Nongsa Digital Park, for instance, hosts fifty firms, all from the city-state, employing almost 300 people. This growth spurt has important implications on the way national-level policies are framed in Indonesia. For the country to reap all the benefits of the digital economy, more resources have to be channelled towards: developing better digital infrastructure; investing in human resources; improving the regulatory environment; and boosting investments from domestic players. A good turnout for this workshop on political, economic and social trends in the Indonesian province of the Riau Islands. (Credit: ISEAS – Yusof Ishak Institute)

Following all the presentations and a dynamic Q&A session, Dr Lee Hwok Aun delivered the closing remarks. The workshop drew an audience of 50 people, including scholars, students, members of the media and the public.