To trace the organisation’s historical development as well as to analyse some proposed future reforms, ISEAS invited Dr Azeem Fazwan Ahmad Farouk from the Center for Policy Research and International Studies, Universiti Sains Malaysia and Mr Zaidel Baharuddin, head of the UMNO Branch for Gombak, Selangor; to deliver a seminar as part of the “Malaysia in Transition Seminar Series”

Friday, 24 August 2018 – The United Malays’ National Organisation (UMNO) was founded in 1946 in response to the establishment of the Malayan Union by the British. From 1957 until May of this year, UMNO and Barisan Nasional (BN) had an unbroken hold on power in Malaysia. However, the 14th General Elections (GE14) saw a major setback for UMNO, which is now seeking to find its place as an opposition party. To trace the organisation’s historical development as well as to analyse some proposed future reforms, ISEAS – Yusof Ishak Institute organised a seminar with key speakers Dr Azeem Fazwan Ahmad Farouk from the Center for Policy Research and International Studies, Universiti Sains Malaysia and Mr Zaidel Baharuddin, head of the UMNO Branch for Gombak, Selangor. Following the introductory remarks by Dr Francis E. Hutchinson, Coordinator of the Malaysia Studies Programme, Dr Farouk presented a comprehensive historical account of UMNO’s origin. Initially formed as an umbrella body of many fragmented state-based Malay political organisations, the party grew rapidly after 1951 – when the UMNO charter was amended and a new constitution was put in place, making it the first truly national party with direct membership. Talking about different levels of the party, he mentioned that the state branches enjoyed a certain level of autonomy for a short span during the 1960s. However, over the following decades, further constitutional amendments were introduced that transformed UMNO into a highly centralised organisation. Mr Zaidel Baharuddin drew smiles from the audience when he put on his songkok just before his presentation “UMNO and what the future holds” (Credit: ISEAS-Yusof Ishak Institute)

Mr Baharuddin then drew the audience’s attention to the recent developments in the party and the leadership’s outlook for the future. Focussing on the GE14 outcome, he shared detailed campaign strategies that were implemented by UMNO and BN and the reasons why they proved to be inadequate to garner greater public support. With regard to the structure of the political party, he argued that the majority of power in UMNO continues to be concentrated at the divisional level. Consequently, while many issues are discussed at the branch level and candidates for leadership positions emerge, divisional leaders are key in deciding which issues and candidates to surface to the national leadership. Mr Baharuddin concluded by emphasising the need for UMNO members to look at the defeat as a reality check and as an opportunity to restructure the party to promote decentralisation of power. 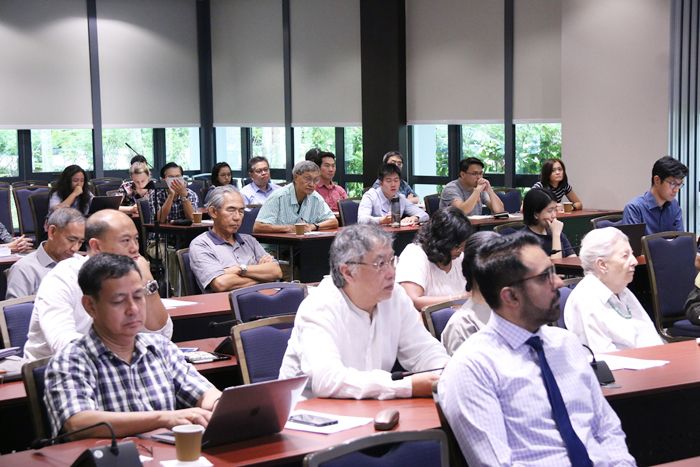 Part of the audience during the lecture (Credit: ISEAS-Yusof Ishak Institute)

The seminar lasted for ninety minutes, and was attended by an audience of fifty-five people, including research scholars, students and members of the public. The guest speakers also answered their questions on an array of topics, including: the possibility of UMNO returning to power; religion-based politics; Malaysia’s relationship with Singapore; and links between UMNO and the business sector.