A+ A-
Prof Leonard Andaya, the inaugural Yusof Ishak Chair in the Social Sciences at the National University of Singapore and Professor of Southeast Asian History at the University of Hawai’i, delivered a lecture titled “Orang Laut and the Realm of the Straits (Negara Selat)”. It was the second in the Nalanda-Sriwijaya Centre’s special series of lectures, “1819 and Before: Singapore’s Pasts”, to commemorate Singapore’s upcoming bicentennial anniversary.
NALANDA-SRIWIJAYA CENTRE LECTURE SERIES ‘1819 and Before: Singapore’s Pasts’

Wednesday, 25 July 2018 – Prof Leonard Andaya, the inaugural Yusof Ishak Chair in the Social Sciences at the National University of Singapore and Professor of Southeast Asian History at the University of Hawai’i, delivered a lecture titled “Orang Laut and the Realm of the Straits (Negara Selat)”. It was the second in the Nalanda-Sriwijaya Centre’s special series of lectures, “1819 and Before: Singapore’s Pasts”, to commemorate Singapore’s upcoming bicentennial anniversary. Using close analysis of crucial historical accounts, he argued that the Orang Laut’s (Sea People) marginal position in history should be reconsidered because, Prof Andaya argued, they were key actors along the Straits of Melaka up until the nineteenth century. His lecture attracted more than 120 participants from diplomatic corps, local and foreign tertiary institutions, museums, government organisations, and members of the public. 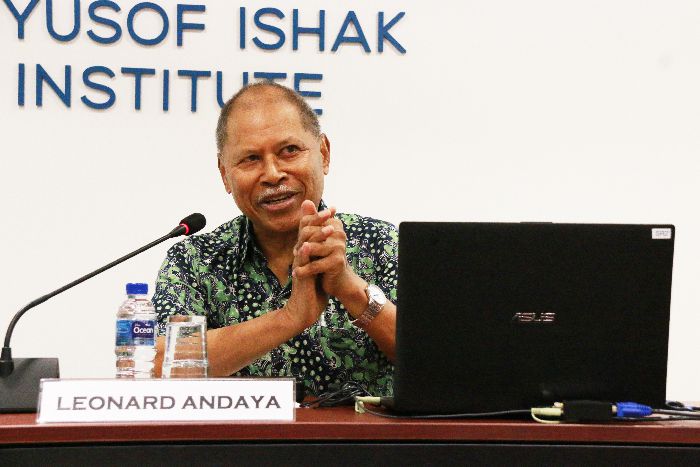 In highlighting the historical importance of the Straits of Melaka and Orang Laut’s roles, Prof Andaya organised his lecture into three interrelated parts. Firstly, he explained that as the Straits was the primary thoroughfare for the lucrative east-west international maritime trade, a conducive environment was created in which the Orang Laut, who inhabited the Straits, became indispensable to the Malays in Negara Selat. As the trade brought ships to the strategically-located Straits of Melaka, Orang Laut guided these traders through the treacherous seas and navigated them to the Malay inland trade ports, many of which could only be accessed with the Orang Laut’s help in entering through specific river mouths. As economic activities in the Malay communities grew in vibrancy, the Orang Laut became more deeply entrenched in the livelihood of these communities. Secondly, using evidence from the Malay Annals and historical records from the Chinese, Arabs, and the Dutch, Prof Andaya argued that the Straits was not regarded as an uninhabited area, but an essential part of Negara Selat’s spatial configuration. The resource-rich seas were considered as important as the land in the land-water continuum. Thirdly, he spoke of the important roles that the Orang Laut played as guardians of the trade lanes. A non-monolithic group of people, the Orang Laut functioned within their own specific water territories as smaller units with their own leaders. In fact, some groups were so distinctive they were deemed more prestigious than others, such as the Orang Suku Bintan. As independent units, they formed different allegiances to land kingdoms of the Negara Selat, becoming trusted crucial allies of the Malay rulers. They provided fighting ship forces and protected their allies from attacks from the sea. In sum, the Orang Laut were crucial to the success of various entrepots along the Straits of Melaka, in which the Malays were the beneficiaries. However, Orang Laut started to lose their strategic position in Negara Selat as the victory of Bendahara dynasty saw the Bugis displacing the Orang Laut. Moreover, technological advancement in shipping and weaponry, and the prioritisation of land-based economic activities over maritime trade, heralded a new era in which the Orang Laut’s expertise lost its relevance. Prof Andaya elaborated that, in fact, the European and Malay gaze began to popularise the notion of the Orang Laut’s lifestyle as uncivilised. In time, the socio-economic position of the Orang Laut was further undermined as Negara Selat’s communities became increasingly landlocked and less able to comprehend their maritime lifestyle.

The lively conversation following the lecture brought several salient points to the fore. Prof Andaya highlighted how Malay rulers gained the Orang Laut’s loyalty through marriages and by bestowing them with important titles. He also mentioned how the Orang Laut earned their livelihood from collecting sea products that were profitable for trade, as well as piracy in collaboration with their Malay allies. The discussion also revealed an ongoing research on the Orang Seletar in Johor Bahru, a community who used to reside along Singapore’s Seletar river and participate in the trade activities at entrepots along the Straits in the past. Most importantly, Prof Andaya underlined the importance of rewriting Singapore’s history before 1819, which could provide a chance to undo the selective historical recording by the ethnic group in power that had left out the Orang Laut’s important historical role, and to restore it to its rightful place.