A+ A-
The ASEAN Studies Centre at ISEAS-Yusof Ishak Institute was honoured to welcome His Excellency Arthayudh Srisamoot, Deputy Permanent Secretary at the Ministry of Foreign Affairs, Kingdom of Thailand, to deliver the 19th ASEAN Lecture on “Thailand’s ASEAN Chairmanship 2019: Advancing Partnership for Sustainability”.

Friday, 11 January 2019 – The ASEAN Studies Center at ISEAS-Yusof Ishak Institute organised the 19th ASEAN Lecture on “Thailand’s ASEAN Chairmanship 2019: Advancing Partnership for Sustainability”. His Excellency Arthayudh Srisamoot, Deputy Permanent Secretary at the Ministry of Foreign Affairs, Kingdom of Thailand, was invited to share his insights on Thailand’s theme for ASEAN Chairmanship 2019, and identify ways of harnessing ASEAN’s potential for the future. 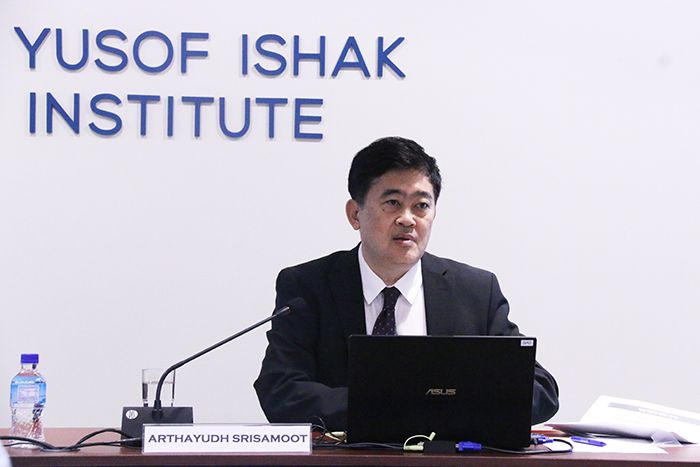 Mr Srisamoot began by giving an overview of the current global political economy. With issues such as increasing competition between major powers, the retreat of multilateralism, and nationalism and trade protectionism becoming more apparent throughout the world, ASEAN member states are faced with weighing a complex set of policy decisions. Additionally, policy-makers have to grapple with other significant challenges such as the evolution of the global information economy, climate change and natural disasters, terrorism, a widening trust deficit between nations, and a changing social structure.

Zooming into the region, Mr Srisamoot explained how Thailand’s theme for ASEAN Chairmanship 2019, “Advancing Partnership for Sustainability”, reflects and aims to address these challenges by focusing on three key words in the theme. Mr Srisamoot started by elaborating on the first keyword, “Advancing”. He stressed the importance of future-orientation; being prepared for upcoming shifts such as the digital revolution and its related challenges such as cyber-crime in order to continue enhancing the region’s competitiveness and becoming a “Digital ASEAN”. Next, on “Partnership”, Mr Srisamoot drew on the example of escalating trade tensions to reaffirm the need for a multilateral and rules-based trade system, as well as called on ASEAN to leverage the strengths of its economies to compete in the international arena. He contended that ASEAN must form partnerships and work with its Dialogue and External Partners, advance ASEAN-centered regional architecture, play a more proactive role in the international environment, and push for the conclusion of the Regional Comprehensive Economic Partnership (RCEP). Mr Srisamoot also highlighted that 2019 marks the ASEAN Cultural Year, which promotes cooperation in the form of cultural celebration and exchange between ASEAN members. Additionally, he reminded the audience that connectivity should be promoted in all aspects through a “connecting the connectivities” approach which links the Master Plan on ASEAN Connectivity 2025 to other regional connectivity initiatives.

Lastly, Mr Srisamoot touched on “Sustainability” as an essential quality of ASEAN’s policies and efforts. By becoming sustainable in all dimensions – also known as the “Sustainability of Things” – the region can enjoy enduring growth, security, and development. He called attention to various new institutional deliverables under Thailand’s helm, such as the ASEAN Centre for Sustainable Development Studies and Dialogue and the ASEAN Centre for Active Ageing and Innovation, which will help to ensure the continuity of policies and initiatives even as the ASEAN Chairmanship is rotated annually. The audience during the lecture (Credit: ISEAS – Yusof Ishak Institute)

Mr Srisamoot concluded with a quote by Dr Surin Pitsuwan, the former ASEAN Secretary-General: “if ASEAN succeeds and grows, it will be good for the region and the world. At least the world will have one less region to worry about. And that is a very significant achievement and contribution indeed.”