Dr Prajak Kongkirati, Assistant Professor, Head of the Department of Government and Associate Dean for Research and Academic Services in the Faculty of Political Science at Thammasat University Bangkok, delivered a highly engaging seminar on Thailand’s elections scheduled for 24 March 2019.


Tuesday 12 March 2019  – Dr Prajak Kongkirati delivered a highly engaging seminar on Thailand’s elections scheduled for 24 March 2019. Dr Prajak is Assistant Professor, Head of the Department of Government and Associate Dean for Research and Academic Services in the Faculty of Political Science at Thammasat University Bangkok. 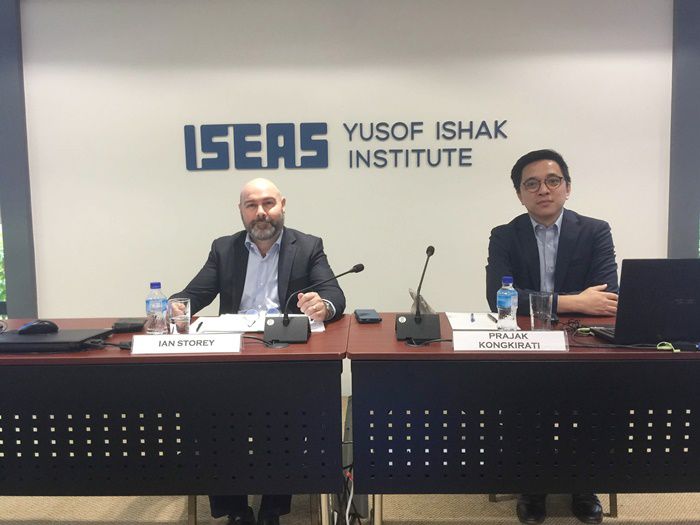 The seminar was divided into six parts: context; rules; actors; factors; possible results; and the future of Thai politics. Dr Prajak began by noting that this will be the first election in eight years as the results of the 2014 polls were annulled and then followed by a military coup which ushered in the longest period of army rule since the 1970s. The election was postponed six times, but under domestic and international pressure, as well as economic problems, the regime had no option but to proceed with it.

In terms of context, the election is taking place against the backdrop of a country that remains deeply polarized politically. The Thai elite seeks to consolidate their control over the country through the establishment of a semi-authoritarian regime. The electoral rules are extremely complicated, and more than 90% of Thai voters do not fully understand the voting system. Voters will elect 500 members for the Lower House but the 250 Senators will be appointed by the junta. Prime Minister General (Retired) Prayuth will only need to win 126 seats in the Lower House to retain the premiership. Regarding actors, the political parties can roughly be divided into three camps: pro-regime (the Palang Pracharat Party), anti-regime (the Pheu Thai Party) and undecisive (the Democrat Party). Other significant actors include the Monarchy and the Army who have forged an alliance. Prajak opined that the February 8 “political earthquake”, in which Princess Ubolratana announced her candidacy but then withdrew it after the King intervened, shows that the so-called “Network Monarchy” has split into competing factions. Another key actor in this election, former Prime Minister Thaksin Shinawatra, who was deposed by the military in 2006, remains an influential actor. An unpredictable factor to this election is the Future Forward Party, led by the charismatic businessman, Thanathorn Juangroongruangkit, who appeals to young voters.

Dr Prajak went on to list the key factors in this election: the new electoral system; the emergence of new parties; 7 million first time voters; the involvement of the palace, army, constitutional court; and the poor state of the economy. The speaker proposed four possible scenarios post-election: first, that the Palang Pracharath Party could form a minority government with Prayuth continuing as Prime Minister; second, that Pheu Thai could form a government; third, that Palang Pracharath could form a coalition with the Democrat Party; and fourth, political deadlock in which an outsider becomes Prime Minister. Prajak concluded his talk by noting the political uncertainty after the election could lead to instability, another election within a year or two, or the military conducting a “self coup”. Full house turnout for this seminar is an indication of the strong interest in the subject with the Thailand Elections happening the next week. (Credit: ISEAS – Yusof Ishak Institute)

The session ended with a lively question and answer session in which Prajak was asked about the possibility of foreign interference in the election, the possibility of a Malaysian-style “political tsunami”, the role of the constitutional court, and the loyalty of the appointed Senators.