This interactive two-day Symposium brought together experts to discuss topics ranging from the state of democracy, ethnic and religious fault lines, the role of Islam, to the future of Indonesian politics.

Thursday-Friday, 11-12 July 2019 – Co-organised by the ISEAS – Yusof Ishak Institute (ISEAS) and the Centre for Strategic and International Studies (CSIS) Indonesia, with sponsorship from Konrad Adenauer Stiftung (KAS), the Symposium on “The Future of Indonesian Politics: Analyzing the Outcomes and Implications of the 2019 Elections” took place at ISEAS. This interactive two-day Symposium brought together experts to discuss topics ranging from the state of democracy, ethnic and religious fault lines, the role of Islam, to the future of Indonesian politics. It drew over 126 attendees. The event kicked off with Welcome Remarks by Mr Choi Shing Kwok, Director of ISEAS; Mr Patrick Rueppel, Senior Program Manager at the KAS; and Dr Philips Vermonte, Executive Director of CSIS Indonesia. Mr Choi and Mr Rueppel highlighted the impact of Indonesia’s political dynamics, particularly the 2019 elections, for the region as well as international society. Meanwhile, Dr Vermonte facilitated the discussion among scholars to assess the state of democracy in the country, and making sense of its politics for the next five years. For the Distinguished Plenary Session on Day 1, we have Ms Alissa Wahid (left) and Dr Sandra Hamid (right) with Dr Hui Yew-Foong as moderator of the session. (Credit: ISEAS – Yusof Ishak Institute)

The first distinguished plenary session featured Dr Sandra Hamid (Executive Director of The Asia Foundation, Indonesia) and Ms Alissa Wahid (National Director of Gusdurian Network Indonesia). Dr Sandra brought up the issue of the Java and non-Java divide, as well as ethnic and religious fault lines, in shaping Indonesia’s political landscape in the recent election. In addition, Ms Alissa explained that the current religion-based majoritarianism influenced the growth of religious exclusivism. Dr Sandra asserted that the upcoming elections for regional heads will influence how the 2024 presidential election will unfold. The third panel, as the last panel of the first day, featured Dr Quinton Temby (ISEAS), Mr Thomas Power (Australian National University), and Dr Ahmad Najib Burhani (ISEAS) in discussions on the mobilisation of Islam in the elections. They discussed Islamisation, the impact of the Prosperous Justice Party (PKS) throughout its career in the country’s politics, as well as the unique trend of flipping votes from Jokowi to Prabowo in Madura, East Java, which was one of the biggest core areas of Nahdatul Ulama (NU). The second distinguished plenary session on the second day brought together vice presidential candidate Mr Sandiaga Uno and CSIS’s executive director Dr Philips Vermonte to share their thoughts on the current state of democracy and the future of Indonesian politics. Citing data collected during and after the campaign period, Mr Sandiaga believed that the 2019 Indonesian elections was centered on the economy rather than religion. He argued that his loss of the election was due to the lack of exposure on mainstream media such as television and radio. Reflecting on his political campaign, he was pleased to have successfully engaged the emak-emak (stay-home mums) and pledged to expand small entrepreneurship projects such as Oke Oce and Rumah Siap Kerja. Dr Vermonte agreed with Sandiaga that the 2019 presidential election was about the economy, but was also laced with religious and identity-related sentiments. The 2019 elections were affected by foreign and domestic events like Brexit and the US-China trade war, and the 2017 Jakarta gubernatorial election and the 2018 regional elections as well. He pointed out that President Jokowi’s role and actions taken in his second term would substantially shape the upcoming 2024 elections. 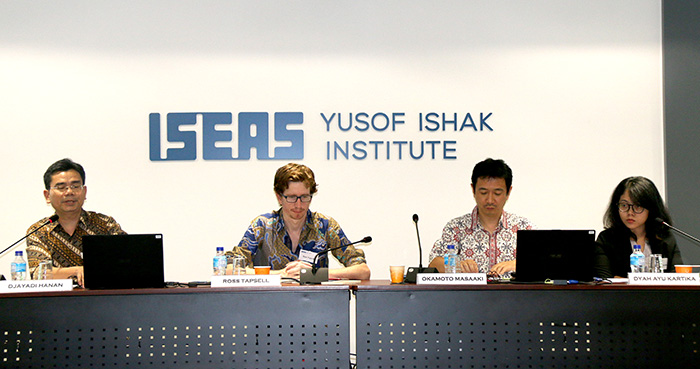 Topics on identities and representation were discussed in the fourth panel by Dr Leo Suryadinata (ISEAS) and Mr Noory Okthariza (CSIS). Dr Suryadinata asserted that Chinese Indonesians are more integrated with Indonesian politics than before. The memories of the Sukarno era have been fading away. On the issue of voter turnout, Mr Okthariza discussed the voting patterns in the presidential election based on data from polling stations. Following that, the fifth panel featured Dr Djayadi Hanan (SMRC), Prof Okamoto Masaaki (Kyoto University), and Ms Dyah Ayu Kartika (PUSAD Paramadina) in a discussion about cyber politics and fake news. A group photo of our speakers and moderators. (Credit: ISEAS – Yusof Ishak Institute)

The forum attracted scholars, government representatives, diplomats, NGO activists, businessmen and media. Participants left with new insights about the future of Indonesian democracy from the panels and the Q&A sessions. Overall, the outlook for Indonesian politics was that identity issues will continue to be influential, particularly in elections. The upcoming regional elections would be significant battlefields leading up to the 2024 elections.

The Symposium interprets the results of the 2019 elections in Indonesia from various perspectives. What seems very clear is that divisions in the Indonesian electorate is deepening. Political divisions occurred at geo-spatial, religious and ethnic levels. Panelists generally predict that these divisions will continue to impact the course of Indonesian politics for the next five years.