Wednesday, 18 July 2018 – In commemoration of the bicentennial of Stamford Raffles’s establishment of an East India Company settlement on Singapore in 2019, the Nalanda-Sriwijaya Centre (NSC), at the ISEAS-Yusof Ishak Institute, has organised a special lecture series entitled ‘1819 and Before: Singapore’s Pasts’. This seminar series aims to introduce the premodern and early history of Singapore, and to locate it in the broader region.

The inaugural seminar was given by Mr Kwa Chong Guan, an Associate Fellow of ISEAS-Yusof Ishak Institute, Adjunct Associate Professor at the National University of Singapore Department of History, and the lead author of the book ‘Singapore: A 700-Year History’. His talk drew a large audience of over 115, comprising diplomatic corps, students and faculty members from institutions of higher learning, public and civil servants, and members of the public. Although Singapore’s history dates back 700 years, not many are aware or convinced of the importance of its pre-Raffles history. To many, Singapore’s history begins in 1819 when Sir Thomas Stamford Raffles founded Singapore as a fishing village. Professor Leo Suryadinata, moderator of the session, invited Professor Kwa to shed light on the question – Why was there no Singapore before Raffles? 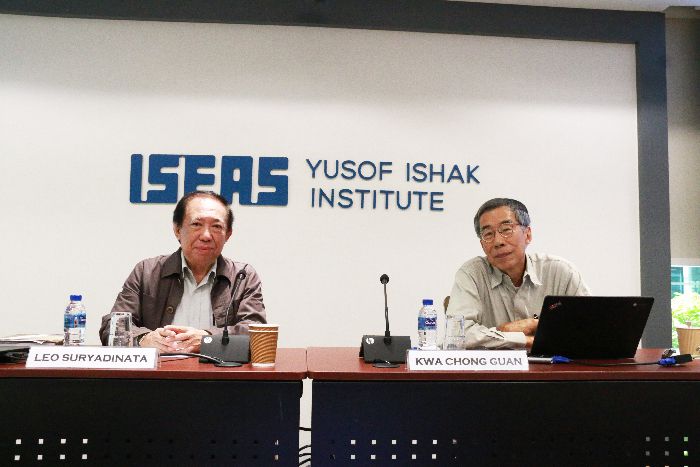 Mr Kwa began by explaining that the popular idea of Singapore as only 200 years old stems from S. Rajaratnam’s declaration in 1984 and 1987 that “this island never really had a history worth remembering (before 1819)”. Mr Kwa addressed (1) how S. Rajaratnam came to this conclusion, (2) the assumptions underlying this view and (3) how this view of Singapore’s past was changing. He shared that there were records of both Raffles and Dr John Crawfurd demonstrating their awareness of earlier settlements on Singapore. However, they concluded that these earlier settlements were abandoned at the time Raffles landed. While it is without doubt that Singapore was founded as a depopulated fishing village, Mr Kwa highlighted a paradox: Why was an island with “a peculiarly admirable geographical position” – as Raffles claimed – found to be deserted and depopulated? He also questioned why Raffles Professor of History, K.G. Tregonning, assumed that knowledge and work on early Singapore by notable figures like Carl Alexander Gibson-Hill and Paul Wheatley “is of antiquarian interest only”; of no relevance to the present modern Singapore.

Perpetuating the idea that there was not much worth remembering before 1819 was historian C.M. Turnbull who, until 2009, was unable to connect precolonial Singapore to other settlements of the world. Turnbull remained convinced that “nothing of significance took place on the island until Raffles’ party landed in 1819”. Mr Kwa asserted that more work can be done to uncover the paradox and assumptions of why and how Singapore did not flourish as a trading port before the nineteenth century.

To do so, this special seminar series will host presentations to help us understand Singapore’s pre-1819 past and how Singapore was connected with others across space and time. The seminar series will include presentations from Professor Leonard Andaya, Dr Andrea Acri, Professor Peter Borschberg, and Dr Mike Flecker, among others. Mr Kwa concluded the session with a thought-provoking statement. Although the narrative of post-1819 has served Singapore’s nation building well, considering Singapore today, is it time to re-write our history to re-write Singapore’s position as a global city? The lecture drew a large crowd consisting of diplomatic corps, students and faculty members from institutions of higher learning, public and civil servants, and members of the public (Credit: ISEAS-Yusof Ishak Institute)

The enthusiastic audience asked many questions including (1) the need to seek connectedness and continuity in Singapore’s precolonial past to modern Singapore. (2) The factors that influenced discontinuities in Singapore’s history, such as climate change in the fourteenth century. And (3) the multiple alternative perspectives Singapore’s history can be (re)written from, such as a Malay, Dutch, Spanish or Sino-centric perspective. The next two seminars of this special lecture series are by Professor Leonard Andaya – ‘The Orang Laut and the Realm of the Straits (Negara Selat)’ on 25 July 2018, and Dr Andrea Acri – ‘Buddhist Accounts of Maritime Crossings in the Southern Seas’ on 14 August 2018.