The lecture was the fifth instalment in NSC’s special series of lectures commemorating Singapore’s bicentennial anniversary, “1819 and Before: Singapore’s Pasts.”

Tuesday, 29 January 2019 – Professor John. N. Miksic, Associate Fellow at the Nalanda-Sriwijaya Centre (NSC), ISEAS – Yusof Ishak Institute (ISEAS) and Professor at the National University of Singapore’s Southeast Asian Studies Department, delivered his lecture at ISEAS on “What More Can Archaeology Tell Us about Singapore’s Past?” The lecture was the fifth instalment in NSC’s special series of lectures commemorating Singapore’s bicentennial anniversary, “1819 and Before: Singapore’s Pasts.” 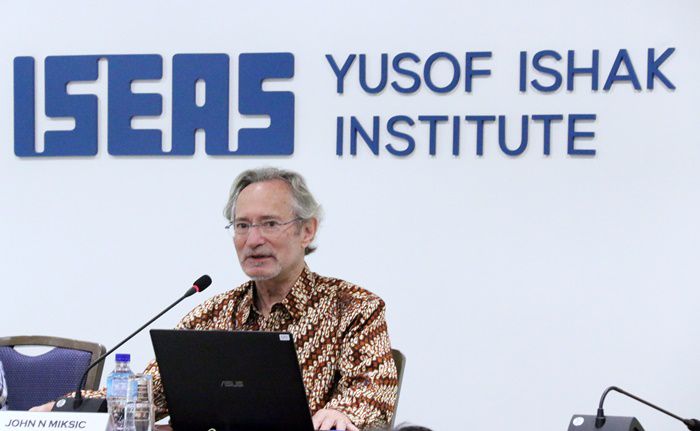 Although archaeological investigations into Singapore’s 14th-15th century Temasek occupation period at various sites in the civic district since the 1980s have made Singapore one of Southeast Asia’s most well-understood port cities of the period, Miksic argued in his lecture that there was still much more to be done. He outlined the finds from several excavations in the civic district area, showcasing a rare one-of-a-kind porcelain compass from China, fragments of a porcelain pillow, and Chinese glass beads finds from Fort Canning, and the evidence of metallurgy at the Singapore Cricket Club. In doing so, Miksic also paid recognition to the many people who had volunteered their time and efforts to the study of archaeology in Singapore, highlighting the organizing and work that was done to spearhead earlier efforts. He also contrasted the archaeological finds with extant historical sources that point to a settlement in Singapore from the period, noting that like the Sejarah Melayu had outlined, the Cricket Club excavation and St. Andrews excavations did unveil a white sandy beach; there may have been elements of truth to the texts. 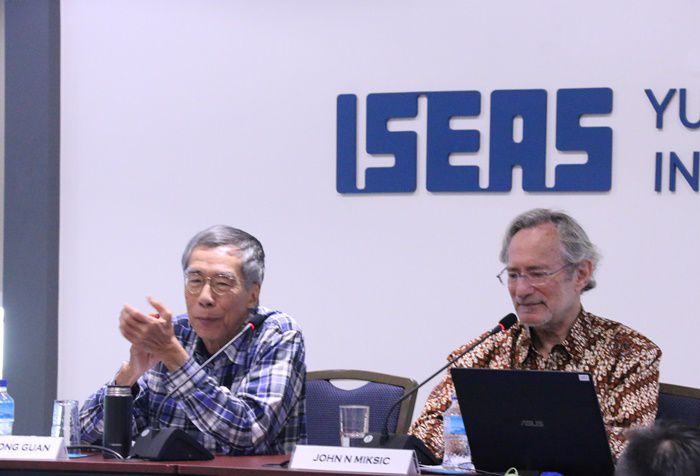 Miksic argued that while there were still pristine areas in Singapore to be had with archaeological potential, he stated that their current preservation would allow for a better understanding by others in the future as the archaeological process was ultimately an irreversible and destructive one, and as better archaeological theory and methods were being developed. Miksic identified a number of specific areas for future study that could be done on currently available data—the ancient ecology of ancient Singapore; comparisons of 14th century Singapore with other sites, whether contemporaneous or from a different period; finding and reading the fragments of the Singapore Stone; a new survey of known prehistoric sites from the colonial period in Singapore; the potential of archaeological science analysis on the source of raw materials for imported objects (such as glass and gold) found in archaeological contexts in Singapore as a way to depict value chains and trade routes; and in the field of maritime archaeology. Miksic also outlined the potential of residue analysis studies on certain artefacts which could give better information as to their origin, use, and possible re-use. Miksic also shared the first results of a database project from the Cricket Club project where raw technical data could be shared and thus compared more easily (http://epress.nus.edu.sg/sitereports/), and he invited others not only from Singapore but others from Southeast Asia to do the same. The lecture was attended by an audience of 63 people, including those from the ministries, the business sector, researchers, students, and members of the public. During the Q&A, audience members asked about the possibility of finding the Singapore stone in Calcutta and whether there were comparable inscriptions from the period. Miksic replied that while there were unsuccessful exploratory forays in the past, there was still a chance. As for comparable inscriptions, Miksic mentioned that it would be more difficult to ascertain as Malay script kept to the same conventions for much longer, making it harder to date as compared to Javanese scripts. When asked about his current priorities, Miksic replied that it was storage; analysis; and finally, display and public education. Finally, when asked whether Singapore would allocate more money for heritage and culture, he said that he was hopeful, as the Singapore government now had begun to provide heritage research grants, and that the Prime Minister himself had stated that Singapore’s history started in 1299.