Dr Kanokrat Lertchoosakul, a political scientist from the Chulalongkorn University, stressed that the 24 March elections made clear that Thai politics was more complex and exciting than a straightforward contest between elites and democratic forces.

Tuesday, 2 April 2019 – Dr Kanokrat Lertchoosakul, Chulalongkorn University, delivered a Thailand Studies Programme Seminar titled “The Unforeseeable Future of Thai Politics after the 2019 Election” where she stressed that the 24 March elections had made clear that Thai politics was more complex and exciting than a straightforward contest between elites and democratic forces. Both structural and immediate conditions explained the outcome of those elections. 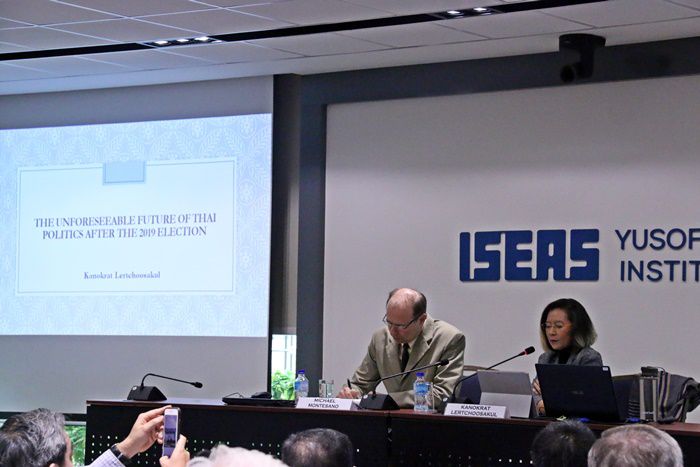 The structural conditions included multi-layered polarization and the determination of the Thai military and allied elites to retain control of the country. To this end, they had resorted to the suppression of rival political forces, designed a constitution whose provisions favoured their preferred outcome, and used state agencies for political purposes. The 2017 Thai constitution is intended to result in weak coalition governments that provide openings for elite extra-parliamentary actors to intervene in the political process.

Nevertheless, the elections revealed the existence of a number of new elements, outside of military control, on the Thai political landscape. These included roughly eight million first-time voters, people who had come of age after the ouster of Thaksin Shinawatra from the Thai premiership in the Army coup of September 2006. These were voters without strong feelings of animosity toward Thaksin and thus people who might not, for example, hold an association between the Future Forward Party and Thaksin against that party. Future Forward’s program — stressing the role of start-ups in the Thai economy and opposition to monopolies and government concessions, advocating an end to military conscription and educational alternatives, and targeting the poor — represented another new element in Thai politics. The appeal of this program coincided with the Democrat Party’s declining appeal to young voters.

Additional new elements were not only the increased importance of parties’ stand toward the military government and but also the direct royal intervention in the electoral process of members of the royal family, in the form of the nomination of King Vajiralongkorn’s elder sister as the Thai Raksa Chat’s candidate for the premiership and the king’s election-eve call on voters to support “good people”.

The results of the 24 March polls reflected demography and the importance of the youth vote, the new electoral system with its mixed-member apportionment feature, and official pressure on the Thaksinite Phuea Thai and Thai Raksa Chat Parties. 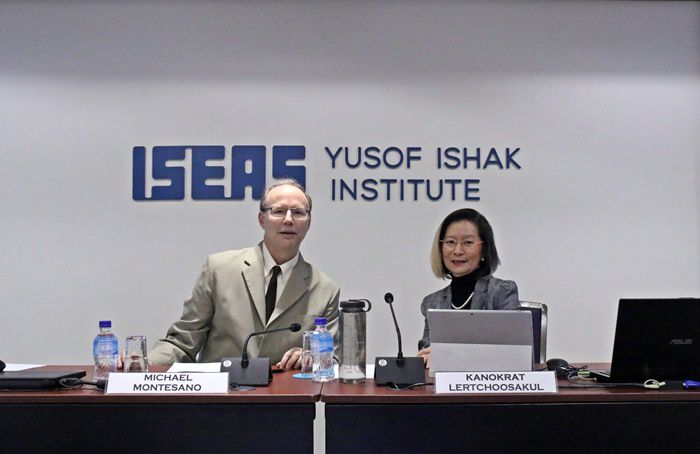 The dissolution of the latter party following its attempt to nominate the king’s sister as its candidate for the premiership was consequential. The former party, Phuea Thai, contested only 250 of the 350 constituency races. It appealed largely to its long-time supporters and performed disappointingly. The design of the electoral system meant that it won no party-list seats. Stuck in its old ways, Phuea Thai also seemed to lack a clear successor to the 73-year-old Thaksin.

The strong performances of the Future Forward and Phalang Pracharat Parties proved surprises. The former ran candidates in all 350 constituencies, of which it won 30. Its six million votes won it an even larger number of party-list seats. Far more successfully than other parties, it appealed to the youth vote, and the design of the constitution rewarded its ability to run candidates in all constituencies. Future Forward benefitted from the endorsement of a number of former Thai Raksa Chat candidates, following the dissolution of that party.

The Democrat Party had long sided with extra-constitutional power, including the military, in its opposition to Thaksin and Thaksinite parties. The decision of the party’s leader Abhisit Vejjajiva to announce late in the campaign his personal unwillingness to support a government in which General Prayut Chanochai returned to the premiership represented a departure from that stance. It played role in driving Democrat supporters to Phalang Pracharat, in the belief that it represented a more effective anti-Thaksin party. Phalang Pracharat probably did not benefit from systematic fraud. Rather, its appeal to voters concerned with law and order and its use of the mechanisms of the state proved important to its success.

What do the results of Thailand’s recent elections mean? While continued polarization and weak coalition government seemed likely to Dr Kanokrat, the bases of membership in coalitions might lie less in an interest in power than in the past. Support for or opposition to authoritarianism might, that is, prove more important. The proposed coalition of democratic parties still lacked the majority of seats in the two houses of parliament needed to elect a premier. Nevertheless, it controlled more seats than the pro-military Phalang Pracharat and Action Coalition for Thailand together. In neither camp so far were the Democrat Party, internally torn over what to do next, and several money-oriented parties. These latter included the Bhumjai Thai Party, which performed well in the polls.

Dr Kanokrat concluded that numerous elite cliques now competed for power in Thailand. In the short run, an unstable pro-military coalition was likely. It would face a large opposition bloc in parliament, as would the democratic parties if they succeeded in forming a government. Street protests against whichever set of forces formed the government were likely, as were military attempts to amend the constitution so that it served its purposes more effectively. The country would continue to struggle with the effects of an aging population, declining foreign investment and the middle-income trap.

Polarization in Thailand was now multi-faceted — between pro- and anti-Thaksin elements, liberals and conservatives, Red and Yellow, the old and the globally oriented young, and supporters and opponents of authoritarianism. During the question-and-answer period, Dr Kanokrat pointed out that a government with minority support in the lower house of the Thai parliament might face a constitutional crisis when it tried and failed to pass a budget. She noted that there would be considerable political activity in Thailand in the weeks ahead, before the selection of a new prime minister and the formation of the new government. Demonstrations might seek to pressure members of the senate to vote in recognition of the will of the electorate rather than in support of junta candidate General Prayut. Dr Kanokrat also mentioned the possibility of delays in the senate’s vote to elect the prime minister, of Electoral Commission nullification of the polls prior to an official announcement of the results on or before 9 May, and the forced formation of a “national government” under an outsider-prime minister.