A+ A-
In this installment of the Politics of the Art in Southeast Asia seminar series, Dr Thanavi Chotpradit, from Silpakorn University, presented a paper titled “The Strong Body Canon: The Art of the People’s Party after Thailand’s 1932 Revolution”. More than twenty participants attended, including those from local universities and art institutions.

Monday, 16 April 2018 – In this installment of the Politics of the Art in Southeast Asia seminar series, Dr Thanavi Chotpradit, from Silpakorn University, presented a paper titled “The Strong Body Canon: The Art of the People’s Party after Thailand’s 1932 Revolution”. More than twenty participants attended, including those from local universities and art institutions. Dr Chotpradit began by taking the audience back to 1932 where the Thai revolution began. The People’s Party, a group led by European-trained military officers and civilians, changed the political system of Thailand from absolute to constitutional monarchy. The 15-year period of the revolutionary regime contributed significantly to the development of Thai modern art. The consequence of the revolution was the shift of art patronage from the court to a “commoner” government. This caused the Fine Art Department to be shifted from the control of the Royal Institute to the Ministry of Education.

Geared towards the eradication of social hierarchy and elevation of the people, Khana Ratsadon or The People’s Party used the arts as a tool for nation-building. Dr Chotpradit then addressed the relationship between the arts and the concept of the strong, muscular body. Muscularity became a dominant paradigm in the revolutionary discourse in which the physiology of the body conflated with the moral of working-class ethos – that is an ability to work hard as a means to build the nation. Taking the working class as the new art subject, the speaker argued that art was both a cause and an effect of the transformation of Thai society by the revolutionary government. Efforts by The People’s Party to promote this strong body for the nation paradigm was seen in other national projects, such as the establishment of physical education, health institutions, and the building of a national stadium. Mass media was also used to promote related policies by publishing images and news articles to encourage healthy eating and sports. 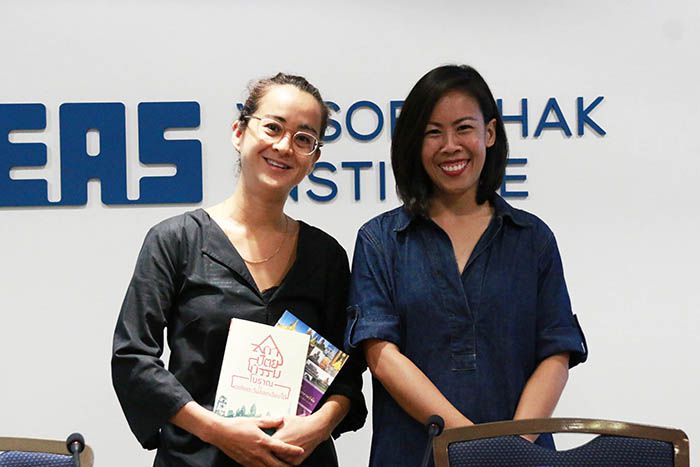 Dr. Chotpradit identified a clear shift from ‘classical’ realism to what she defined as ‘heroic realism’ where physical perfection and muscular bodies were expressions of change in Thai social structure. Sculptures and art works showcased in the Annual Constitutional Fair clearly reflected The People’s Party’s Six Principles (Independence, Security, Economy, Equality, Liberty, and Education) or Lak Hok Prakan – promoted by The People’s Party as Thailand’s new national policy. Themes such as peasantry, civic duty, and warrior were also represented in those sculptures.

Dr. Chotpradit concluded that the abovementioned features contributed to the surge of new artistic expressions at the beginning of Thai modern art. Furthermore, the exaggeration in the depiction of muscles in these sculptures was an indirect attack against nobility traditionally represented with slender and effeminate figures. Art during this period was used as a critique of the past and a tool to champion the present. 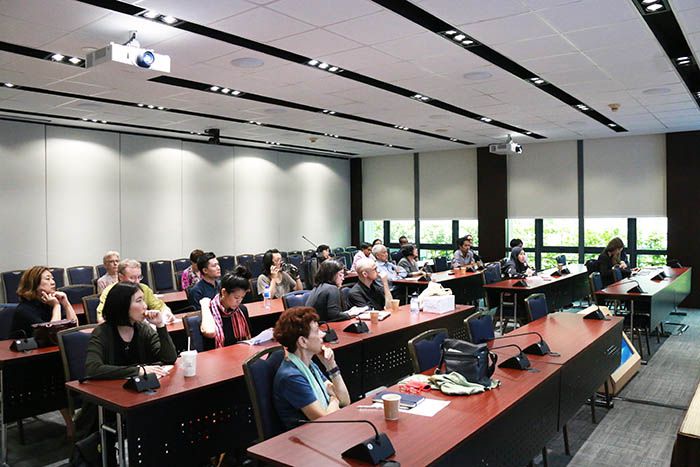 Questions from the audience allowed the speaker to emphasise the reception of the constitutional fairs as an education tool for the masses. Dr. Chotpradit also showed how the fairs were a means to promote the new ideologies, with minimal criticism. Further questions also allowed her to highlight specificities of the muscular body in building a strong nation. Although sculptures were influenced by Western art, Thai elements could be seen in the hairstyles and clothes. Other questions allowed Dr. Chotpradit to challenge the royalist judgement of the post-revolutionary period that harshly criticised The People’s Party’s taste in art, that its members were not all well-versed on the subject of art. Dr. Chotpradit argued that such criticism was based primarily on ideological conflict rather than aesthetic one. Questions also addressed the term ‘realism’ used to describe the sculptures. Other terms such as ‘classical realism’, ‘socialist realism’ and ‘fascism’ were suggested but Dr. Chotpradit argued that there was not enough evidence of these influences. The term ‘heroic realism’ was probably most appropriate to describe Thailand’s revolutionary art as it suggested diversity of realism in a particular phase of modern Thai art.