In this seminar, Dr Syafiq Hasyim exposes the position of sharia economy in the future trajectory of Indonesian democracy. 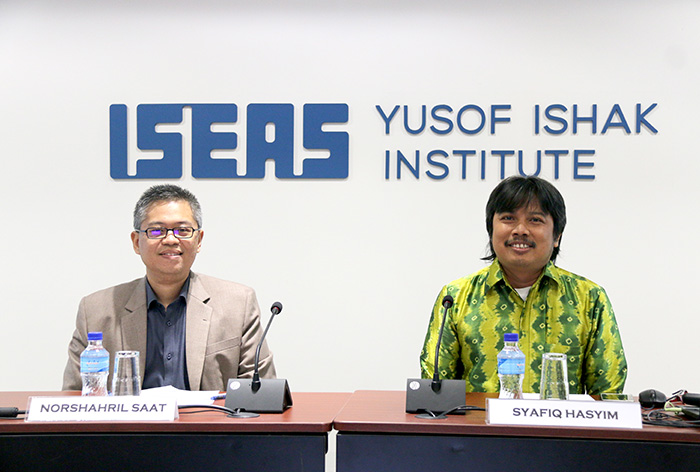 Dr Hasyim started the seminar by highlighting the increasing incorporation of sharia into the legal and public spheres in Indonesia. He stated that there has been a clear trajectory in the ‘shariatization’ of the economy under the first Joko “Jokowi” Widodo administration. It is evidenced through the enactment of the Law on Sharia Bank and the Law on Halal Product Assurance.

Dr Hasyim also pointed out that for Indonesian Muslims, the shariatization of the economy represents a political rather than economic issue – it is not only a key to establish social justice and welfare, but also a way of demonstrating their identity as Muslims. The narrative of sharia economy, he added, is needed as an alternative to the global economic system and often associated with the ambition of Indonesian Muslims to master the economic sector.

Dr Hasyim then elaborated on the history of Islamic economics in Indonesia. The emergence of two prominent scholars of Islamic economics, Al Faruqi and Naquib Alattas, led to the establishment of the International Institute of Islamic Thought (IIIT) in 1981. In the 1990s, the Indonesian Association of Muslim Intellectuals (ICMI) then became an important institution in the adoption of an Islamic economy by establishing Bayt al-Ma wa al-Tamwil (BMT) – or house of retail – and Bank Mu’ammalah Islam (BMI), an Islamic bank.

Laying out the historical trajectory of institutions which significantly shaped the development of the sharia economy, Dr Hasyim mentioned that MUI, through its sub-institutions such as the National Sharia Supervisory Board (DSN) and the Assessment Institute for Foods, Drugs, and Cosmetics Majelis Ulama Indonesia (LPPOM MUI), has been acting as an authoritative institution in the issuance of fatwas on sharia, based on the Law No. 21/2008 on sharia banking and Law No. 33/2014 on the national commission on halal product guarantor (BPJPH).

Dr Hasyim also noted that the current government Islamic Economic Masterplan 2019-2024 identifies specific sharia economic clusters, such as sharia banking and finance and halal economy, but excludes the concept of Islamic economy. The current spillover effect from the 212 Movement, and its emerging 212 Marts all over the country, will also further strengthen the sharia economy on the regional level, Dr Harsyim predicted.

To conclude, Dr Hasyim reflected that the sharia economy, especially the halal economy, has deepened social segregation. It tends to exclude the interests of minority groups, for example, when drafting state laws on sharia bank and halal products assurance. He asserted that the sharia economy is not only about implementing sharia in the economy, but also the incorporation of sharia into Indonesia’s legal and public spheres. This process of shariatization also reflects the shift from cultural Islamization to structural Islamization in the country.

Among the 39 attendees, some asked questions on the challenges facing the business community, particularly ethnic Chinese businessmen; the interest-free economy and its impact on conventional banking; corruption in the halal certification process; and challenges in implementing the law on halal product assurance. The speaker also discussed the political dynamics of the relations between MUI and the government. Some of the audience in the seminar. (Credit: ISEAS – Yusof Ishak Institute)