Prominent Indonesian politicians, Hendrawan Supratikno, Grace Natalie, Sukamta and Abdul Mu’ti shared their perspectives on this year’s electoral processes, strategies and outcomes, along with their expectations for the future of Indonesia’s political landscape in this highly anticipated seminar.

Thursday, 2 May 2019 – While Indonesia has successfully held the 2019 Presidential and Legislative elections with a promising turnout of around 80 percent, the official final results will only be revealed on 22 May. The current quick count results show that the incumbent President Joko Widodo (Jokowi) leading over his opposition Prabowo Subianto. Four prominent Indonesian politicians were invited to provide an “inside-out perspective” and share their views on this year’s electoral processes and outcomes, and their expectations for the future of Indonesia’s political landscape. They include Dr Hendrawan Supratikno, a Member of Parliament from the Democratic Party-Struggle (PDI-P); Grace Natalie, chairperson and co-founder of Indonesia Solidarity Party (PKI); Sukamta, secretary of the Prosperous Justice Party (PKS) and Abdul Mu’ti, secretary-general of the Central Board of Muhammadiyah. The 120-minutes long seminar was moderated by the Director of ISEAS – Yusof Ishak Institute, Mr Choi Shing Kwok. Dr Hendrawan began his presentation with a remark that PDI-P, the largest political party in Indonesia, is pivotal for a stable Indonesia. He described the complexity of the elections which involved 190 million voters, 800,000 voting stations and takes 35 days for the vote counting process to be completed. Dr Hendrawan noted that Jokowi’s vote percentage in the 2019 Elections had increased despite winning only 21 provinces compared to 23 provinces in the 2014 elections. This was attributed to Jokowi’s significant victory in two out of three of the largest provinces in Java namely Central and East Java, bearing the fact that Java contributes around 60 percent of the voters in Indonesia. Dr Hendrawan kicked off the session by describing the complexity of the elections. (Credit: ISEAS – Yusof Ishak Institute)

A more stable government is expected as Dr Hendrawan said that more political parties were likely to declare support for Jokowi over time. He gave a brief history into the formation of PDI-P and outlined the party’s broad strategies of establishing itself as an inclusive party which catered to all Indonesian nationalities and the less economically privileged communities. He said PDI-P has consistently performed well in legislative elections and is dominant in 15 provinces, hence ensuring Indonesia is a stable democracy and forming a stronger administration to support the next president.

Ms Grace Natalie shared her perspectives on how PSI approached the legislative elections. Established in 2014 right after Jokowi was first elected as president, PSI’s vision is to seek transformation in Indonesian politics. This was achieved by setting two platforms of anti-corruption and anti-intolerance, with the aim of protecting Indonesian pluralism and fighting for the rights of marginalised groups. Ms Natalie pointed out that consequently, PSI consisted of more people with disabilities, women and from minority groups running as legislative candidates than other political parties. In the election campaign, PSI also proposed digitalization to monitor legislative performance and ensure policy making was transparent to the public. Ms Natalie said PSI has performed surprisingly well in the 2019 elections, able to secure seats in the Jakarta provincial legislature and projected to obtain seats in more than 9 provincial legislatures and 34 district and/or city councils. PSI also performed particularly well among overseas voters. She argued that these results show that amid increasing religious polarisation and identity politics, there was public trust for PSI and active participation in the electoral process.

Sukamta described PKS as a centre-right Islamist centrist party that is Islamist, democratic and moderate. PKS aims to manifest universal Islamic values which were applicable to national values of Indonesia, for example translating honesty to anti-corruption. Sukamta emphasised that PKS does not seek to install an Islamic Law system based on Sharia Law to replace the foundations of Pancasila and the 1945 Constitution which were already in place. Instead PKS introduces policies which accommodate Indonesians of all backgrounds in a highly diverse country, regardless of race, ethnicity or religion. Sukamta stated that Islam will always enhance the lives of Indonesians and Indonesia as a nation, if Islam is practiced in a good and peaceful manner. Dr Sukamta emphasised that PKS does not seek to install an Islamic Law system based on Sharia Law to replace the foundations of Pancasila and the 1945 Constitution. (Credit: ISEAS – Yusof Ishak Institute)

In the 2019 elections, quick count shows that PKS has performed better than the previous election, having earned at least 3 percent more votes than before. Additionally PKS was able to successfully securing seats in new areas untouched by the party before. This was attributed to PKS’s attempt to broaden the political base by attracting voters from rural areas. Sukamta noted that PKS would continue to grow and be a constructive opposition party in the parliament in order to ensure the progress of Indonesia.

Abdul Mu’ti, shared his insights on the 2019 elections from a different perspective. In the context where religion is an important factor in Indonesian politics, he observed that many politicians and religious figures assume each other’s identity which caused a volatile atmosphere in the presidential elections. While the elections have been conducted peacefully, there were also drawbacks. Candidates of the members of parliament saw the electoral process as complicated, costly and cannibalistic. Mu’ti attributed this to competition between political parties and within each political party; money politics was possibly still influencing the 2019 elections. 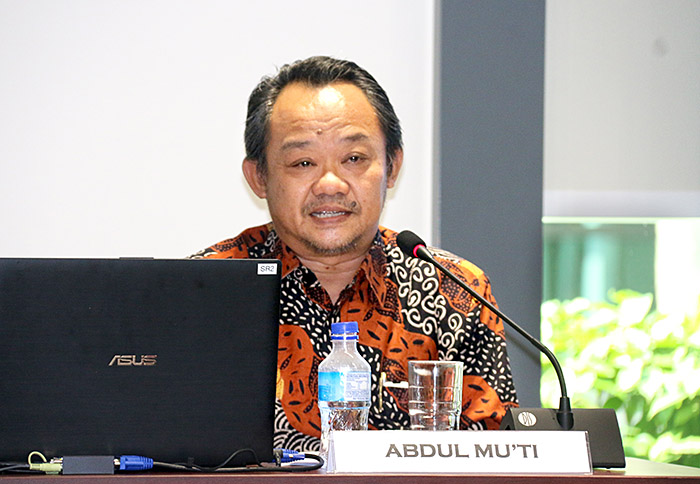 Mu’ti noted that while Islam remains a key political factor in Indonesia, but election results showed otherwise. Despite Indonesia being a Muslim majority country, Indonesians have continued to vote for nationalist parties over religious based parties. He observed that Nahdlatul Ulama affiliated members were concentrated in Islamist parties while members affiliated to Muhammadiyah were more dispersed among many parties; prominent figures have chosen to join nationalist rather than religious based parties. Hence, Islam in Indonesia has stayed moderate and open-ended for Indonesians. Also, Mu’ti noted that religious figures did not contribute significantly to the number of voters even when Jokowi chose Ma’ruf Amin to be his running mate for the presidential election.

Mu’ti argued that the political polarisation seen in the last elections was the contestation between “established” Islam (organised within Islamic organisations) and “emerging” Islam (do not belong to any) in relation to the legal drafting process in parliament. He said that those who were engaged in “emerging” Islam do not reside in a single political group and participate in reunions rallies such as the ‘212’ reunion rally held in February. This included people who are newly attached to Islam and those in the “Hijrah Movement”.

In the next 5 years, Mu’ti foresees that Indonesia politics will continue to be democratic. He attributed this to an optimistic trend of increasing participation in public issues and a balanced composition of nationalist and religious based political parties present in the parliament.

More than 100 attendees from diverse backgrounds ranging from government officials and ambassadors, academics, media and the public were present in the fully occupied seminar. A wide variety of topics were discussed, including shedding light on PSI and PKS’s strong performance in this elections, the rise of emergent Islamist groups, the tensions and impact of President Jokowi’s closeness to China on the elections and the trend of growing intolerance in Indonesia. The seminar concluded with a discussion on the 2024 elections of how political parties intend to strengthen their political position, and the hope for increased participation in the public and political arena among Indonesians. We also thank Ho Bee Foundation for their generous support towards this event.