This is the seventh instalment of a special lecture series commemorating Singapore’s bicentennial anniversary, “1819 and Before: Singapore’s Pasts”. Dr Iain Sinclair, Visiting Fellow at the Nalanda-Sriwijaya Centre (NSC), deliver a lecture on “The Inception of Lion City”.

Wednesday, 3 April 2019 – The seventh instalment of this special lecture series commemorating Singapore’s bicentennial anniversary, “1819 and Before: Singapore’s Pasts”, saw Dr Iain Sinclair, Visiting Fellow at the Nalanda-Sriwijaya Centre (NSC), deliver a lecture on “The Inception of Lion City”. It was attended by more than 50 participants from the diplomatic corps, civil service, educational and research institutes, and the public.

In this lecture, Dr Sinclair spoke about the Tribuanic dynasty, or the line of Hindu-Buddhist kings that ruled parts of present-day Indonesia, Malaysia and Singapore. Drawing from the Sejarah Melayu, Dr Sinclair traced the movements of the Tribuanic dynasty across the region and the etymologies of its various seats. He acknowledged that although the Sejarah Melayu has three different recensions and contained certain embellishments, it is ultimately still the internal factual chronicle of the Tribuanic dynasty. According to the Sejarah Melayu, the dynasty first appeared in Palembang, and this could have occurred by the 1260s. One branch of the dynasty later made its way to Temasek. After the dynasty had been in Singapura for a while, it was thrown out and eventually moved to Melaka. 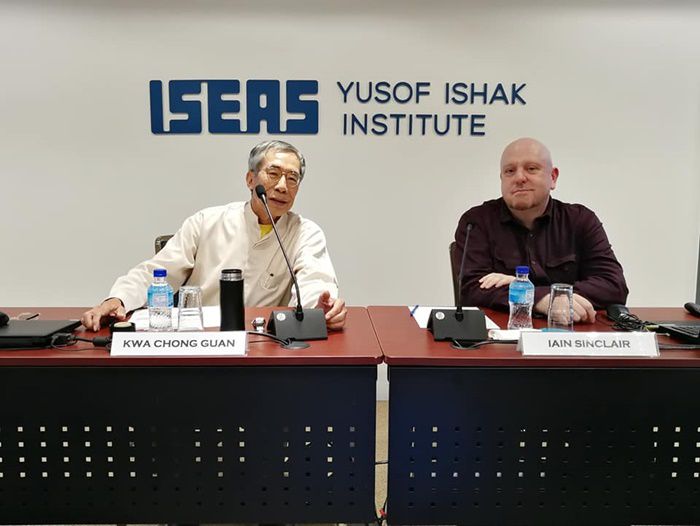 The accepted etymology for the term “Temasek”, which has semi-official status, is that it comes from the Malay word “tasik”, meaning “in the waves”. However, there is little support for this. Dr Sinclair instead proposes that “Temasek” is connected to the tin trade. The word “timah”, meaning tin, is used everywhere in the Malay Archipelago, and the tin trade was known to be associated with the Malay world. Tin coins were also used in Temasek, and thus it became known as the “tin coin country” to Muslim traders. Dr Sinclair suggests that “Temasek” comes from “timah” and “sikka”, an Arabic word that refers to a mint for creating coins.

Moving on to Singapura, its official etymology is that it comes from “simha” and “pura”, meaning “lion city” in Sanskrit. Dr Sinclair proposes instead that Singapura means the “city of the lion throne”, equivalent to “simhasanapura” in Sanskrit. The most common reference made to lions in the Sejarah Melayu centres around the “lion throne”, which is consistently associated with the royal line and was present at the founding moment when Sang Sapurba was coronated. Dr Sinclair posits that Singapura refers to the “city where the royal lion sits”. There is sufficient evidence that the “royal lion” shifted to Singapura in the late thirteenth century, and it became the sole residence of the Tribuanic lion. Although Singapura is believed to have been founded in 1299, Dr Sinclair suggests instead that it could have been founded in 1292.

In the late fourteenth century, the Tribuanic dynasty moved to Melaka after being forced out of Singapura in a violent conflict. The usual etymology is that Melaka comes from the word “amalaka”, which is Sanskrit for “myrobalan tree”. However, Dr Sinclair proposes that in the Sanskrit context, “mleccha” often refers to a Muslim, and the Old Javanese pronunciation “maleca” could be the origin of “melaka”. “Negeri melaka” would thus mean “city of the Muslim”. He concludes that Melaka had already been settled by Muslims and was a renowned Muslim trading centre even before the arrival of the Tribuanic dynasty. During the Q&A discussion, Dr Sinclair addressed questions relating to alternative etymologies of Singapura, such as those which suggest that Singapura refers to the “gateway of China”. He remarked that such etymologies do not fit linguistic evidence, and reiterated that it is quite evident that “Singapura” was related to the lion motif, which was closely associated with royalty and the Tribuanic dynasty. The lion was also a large part of the imagery and iconography of this region, and appeared in art, temples and shrines. When asked about key events that occurred in 1292, Dr Sinclair explained that this was an important year in which the Mongols invaded Java and that Sang Sapurba, founder of the Tribuanic dynasty died. As such, the succession of the dynasty was able to move into a new place, and 1292 was possibly the year in which Singapura was founded. However, he emphasised that information is scant, and that more could be done to study Singapore within this period.