In this seminar, Dr Serina Rahman explores the possibility of Malaysian homes as potential nests for non-violent radicalisation, with a specific interest in mothers’ need for peer recognition and personal power in a patriarchal society leading to their unwitting support for extreme interpretations and practices of Islam.

Thursday, 31 October 2019 – Dr Serina Rahman, a Visiting Fellow at the Malaysia Programme, ISEAS – Yusof Ishak Institute put forward the hypothesis that Malaysian Muslim mothers could be vectors of terror as a consequence of societal patriarchy, increasing Islamic conservatism and the scope of a woman’s sphere of power within the home. She began by pointing out that her only goal was to join the dots and highlight a section of the population that might slip by unnoticed in the effort to curb rising extremism and prevent disastrous outcomes similar to that of the Surabaya family suicide bombings of 2018.

Dr Rahman set the scene by explaining patriarchy in Malaysia and the understanding that while a woman has a career or may be highly educated, there is an overpowering expectation that her priority remains her family and the home. Hence, as some of her informants have mentioned, these women ‘leave their qualifications at the door and focus on meeting family needs’ as soon as they get home. She highlighted findings from a recently released survey on The Public & Personal Rights of Muslim Women in Malaysia by Sisters in Islam in which the women surveyed discussed the ‘pressure of being judged by society when they are seen to be spending more time at work than with the family’.

Add to that increasing exclusive Salafi-Wahabi interpretations of Islam and the popularity of religious speakers such as Zakir Naik and family, and celebrities such as Fynn Jamal who have converted to full niqab (full-face veil) and espouse more conservative practices to their expansive and growing fanbase. Dr Rahman cited studies such as a 2013 Pew Survey that indicated 86% support for Shariah law and a 2015 Pew Global Attitudes Survey that showed 11% support for ISIS, among other factors that demonstrated increased leanings towards conservatism in Malaysia.

Another piece of the puzzle came in the form of gender stereotypes. In spite of the patriarchy and the belief that men are the primary drivers of Islam and the family, she showed that her findings in rural areas concurred with that of Sylvia Frisk (2009) in a wealthy area of Kuala Lumpur; whereby Malaysian Malay society functions on the belief that men are a ‘weaker sex’ in that they are more susceptible to their desires and vice, and that women on the other hand, have no problem exerting self-control. It is an extension of this then, that mothers are seen as pure and perfect and thus bypassed as being capable of perpetuating potentially radical views.

Dr Rahman quoted several hadith and instances from her fieldwork that illustrates how mothers are seen as the pathway to heaven – meaning that her offspring must obey and implement her every command so as to accumulate merit for a better position in the afterlife. Alternatively, the belief is used to guilt the children into taking the blame for the mother being unable to access a place in heaven (as a result of their disobedience). The women then use the implementation and enforcement of religion in the home as a space to exercise some level of personal power to counter the oppression of patriarchy in the public space. 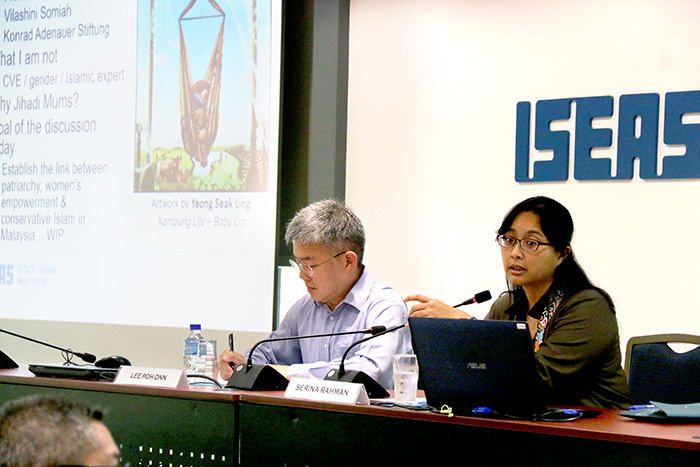 As part of her fieldwork findings, Dr Rahman relayed how Ustadha Farhat Naik (the wife of Zakir Naik) emphasised the role of a wife as a doer of good deeds, and the fortress against the devil for both the husband and the child; hence the development of faith in a child rests upon the shoulders of the mother. Sylvia Frisk’s work was also cited as evidence that for some women, their greatest desire was to ‘submit to the will of a transcendental God’ and this includes transforming ‘the husband’s religious behaviour and attitude’. It was against this backdrop that ISIS’ approach to women in jihad was brought up. Several examples were cited to demonstrate how women were tasked with raising ‘soldiers of God’ and ‘indoctrinating and providing consent for their sons to fight in the cause’.

With the backdrop to the study set, Dr Rahman then dived into the results of her fieldwork – she discussed how her informants (who were participants in conservative study circles around Kuala Lumpur) were encouraged to send their sons and spouses to Syria, how the women willingly contributed to funding ‘the ummah’ (Islamic community – and hence, inadvertently, terrorism) and how these women achieved social empowerment and recognition for their commitment to the cause. She also compared the extent of religious literacy in women that she met in events such as seminars by Ustadha Farhat Naik and those at study sessions and events by Sisters in Islam. The former were wholly reliant on and believing of an ‘expert’ to tell them what to do (and hence more susceptible to more exclusivist teachings) while the latter were able to examine various views and interpretations of the Quran, as well as understand the context within which the verses were presented during the time of the Prophet.

Based on work done by other experts in counter-terrorism and her own studies of YouTube sermons and other religious seminars, she outlined how non-violent extremist preachers are able to reel in and convince their audiences to follow their exclusive approach to the faith, and thereby encourage more of the masses to practice a more literal interpretation of Islam. She also mentioned several cases of women known to spread radical beliefs both in the city and rural areas, engaging specifically with university students, single mothers, and secondary wives in polygamous marriages.

Dr Rahman ended the session with a reassertion of her goal – that it was only to highlight that mothers or mother-figures are a section of society that are often overlooked in the war on terror, largely because of societal assumptions of their purity and perfection. Counterterrorism literature on women and families in jihad in the Arab world have already pointed out the pride of mothers whose sons participate in or die in jihad, but this possibility does not seem to be taken as seriously in Southeast Asia. At the very least, a mother with radical leanings will not report an offspring or spouse who intends to join ISIS; at the worst, she may encourage her family to commit to the cause. The hope is that the Trends in Southeast Asia issue on this topic (which will be released before the end of 2019) will help to encourage counterterrorism work in the region to pay more attention to the possibility that mothers could be vectors of terror.