This seminar was delivered by Dr. Jayant Menon, Professor Chia Siow Yue, Dr. Tang Siew Mun and Mr Barath Harithas, and held in conjunction with the publication of the book titled “An Evolving ASEAN: Vision and Reality” edited by Dr. Menon and Dr. Cassey Lee. It was published by the Asian Development Bank. Monday, 24 September 2019 – ISEAS – Yusof Ishak Institute organised a seminar on “The Evolution of ASEAN Economic Cooperation”, delivered by Dr. Jayant Menon, Professor Chia Siow Yue, Dr. Tang Siew Mun and Mr Barath Harithas. This seminar is also held in conjunction with the publication of the book titled “An Evolving ASEAN: Vision and Reality” edited by Dr. Jayant Menon and Dr. Cassey Lee, and published by the Asian Development Bank. The seminar was chaired by Dr. Siwage Dharma Negara and was attended by audiences from the academia and members of the public. Dr. Jayant Menon (left), Lead Economist in the Office of the Chief Economist at the Asian Development Bank in Manila, discusses the origins of the book project. (Credit: ISEAS – Yusof Ishak Institute)

Following the introductory remarks by Dr. Negara, Senior Fellow, Dr. Menon began his presentation by discussing the origins of the book project and the general questions it sought to explore. Next, he provided a comprehensive summary of the chapters overview and highlighted the authors’ expertise. This is followed by some of the key messages from the authors.

ASEAN is an effective functioning entity which has contributed to the rapid economic development and rising living standards in its member states. ASEAN has focused on the importance of balancing political and economic objectives to maximise regional progress. The importance of strengthening the AEC’s implementation as a regional economic integration agenda has increased over time and is likely to persist in future. There is also a need to balance global, regional, and national interests. ASEAN needs to find a better balance between allowing flexibility and binding member states to their commitments. ASEAN’s institutions can be strengthened by helping the organisation meets its operational capabilities. ASEAN will continue to build strong bonds through trust, respect and personal friendships to maintain ASEAN centrality when dealing with bigger and powerful external partners. Professor Chia Siow Yue, Senior Research Fellow at the Singapore Institute of International Affairs, stressed the importance of balancing the national interest of every member states with the regional and global interest of ASEAN. (Credit: ISEAS – Yusof Ishak Institute)

After Dr. Menon’s presentation, the panel discussed various issues on ASEAN. Professor Chia began her discussion by clarifying that AEC is a FTA-plus and never a customs union or single market because of the economic diversity in ASEAN economies. As ASEAN moves forward, she stressed the importance of balancing the national interest of every member states with the regional and global interest of ASEAN. Next, Mr Harithas looked at the potential impact of economic frameworks (i.e. RCEP, CPTPP and etc) on ASEAN and its future. From an ASEAN’s perspective, he is optimistic that member states which accepted CPTPP provisions would be more likely to accept the provision in EU’s FTAs which are ambitious. Dr. Tang then looked at the development of ASEAN over the years. He explained that ASEAN was formed during the cold war to keep major powers out and maintain the national sovereignty of member states. After the cold war, the organisation transitioned to engage with major powers through forums and summits. Its main purpose was to bring in resources and FDI into the region. He believes that ASEAN is transitioning to a third stage which is to manage the relationship of major powers that hold an interest in the region. To conclude the panel discussion, he said that ASEAN and AEC are still a work in progress. 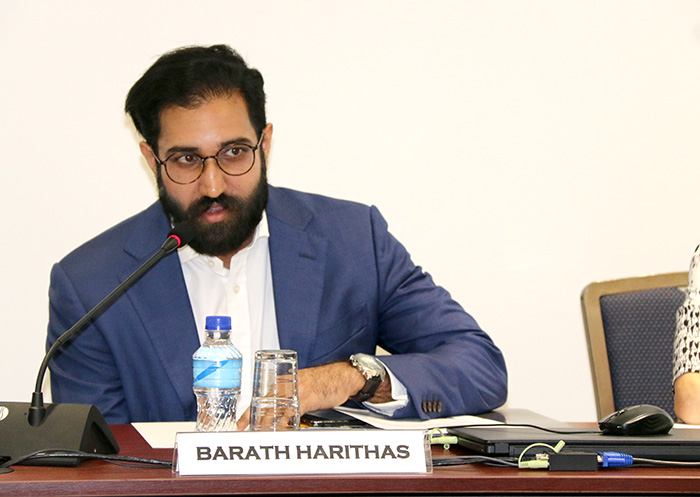 The seminar was attended by audiences from the academia and members of the public. (Credit: ISEAS – Yusof Ishak Institute)