This seminar by Prof Tey Nai Peng inaugurates a new seminar series under the Malaysia Studies Programme entitled “Urbanization, Consumption and Culture”, and presents a systematic overview of Malaysia’s main demographic shifts since the 1960s and their effects on Malaysia’s social, economic and political circumstances.

Monday, 19 August 2019 – The ISEAS – Yusof Ishak Institute recently hosted Professor Tey Nai Peng, research fellow at the Faculty of Economics and Administration, University of Malaya. Professor Tey was in Singapore to give a talk entitled “The Dual Fertility Transition and its Consequences in Malaysia”. The audience constituted roughly 30 researchers, diplomats, civil servants, journalists, and members of the public. The presentation inaugurated a new seminar series under the Malaysia Studies Programme entitled “Urbanization, Consumption and Culture”. This series has been initiated to help audiences better understand the reasons behind the historic outcomes of Malaysia’s 14th General Election. It intends to complement ongoing research on elite-centric explanations for Barisan Nasional’s 2018 electoral upset with a focus on Malaysian society at large. The series also aims to reflect on the degree to which major socio-economic issues affecting Malaysia – such as urbanization, ageing populations, socio-religious intolerance, rising living costs, and food insecurity – have counterparts in other Southeast Asian societies.

Prof Tey presented a systematic overview of Malaysia’s main demographic shifts since the 1960s and their effects on Malaysia’s social, economic and political circumstances. He drew the audience’s attention to different rates of decline in reproduction between Malaysia’s three main ethnic groups. Since the 1970s, Malaysia’s ethnic Malay/Bumiputera population has had consistently higher birth-rates than its ethnic Chinese and Indian populations, hence the observed ‘dual fertility transition’ pattern of the past 40 years.

Prof Tey reviewed the reasons behind this bifurcated pattern, many of which were interlinked. They included changing social values, urbanization, increased formal education, greater female employment, marriage and divorce patterns, contraceptive use, rising living costs, and mass emigration. Prof Tey noted that historic differences in abortion rates could have been another possible factor, but good primary data on the subject remains scarce.

Prof Tey also discussed the major consequences of the dual fertility transition in Malaysia: slower population growth and a limited domestic consumer market in the long term, with a plausible peak at 47 million around 2065-2070. In the meantime, labour shortages will continue, ageing will become an increasing concern, and the demographic dominance of Malays vis-à-vis Chinese and Indian populations will only deepen further. On the flip side, lower fertility rates have gone hand-in-hand with more resources for children’s education, and women continue to benefit from more social autonomy than in earlier decades. Since the 1980s, the Malaysian authorities have enacted policies to help stem the fertility decline, but more could arguably be done. Malaysia is fortunate to be currently reaping a demographic dividend from the past; this window is set to close in a decade.

The hour-long presentation was followed by a lively Q&A session with the audience. Discussions touched on the likelihood of robotics addressing Malaysia’s labour shortages, the historic significance of emigration amongst Malaysia’s various ethnic groups, the political implications of population re-distribution by geography and age, and the extent and consequences of large-scale Malay student enrolment in rural Chinese vernacular schools. 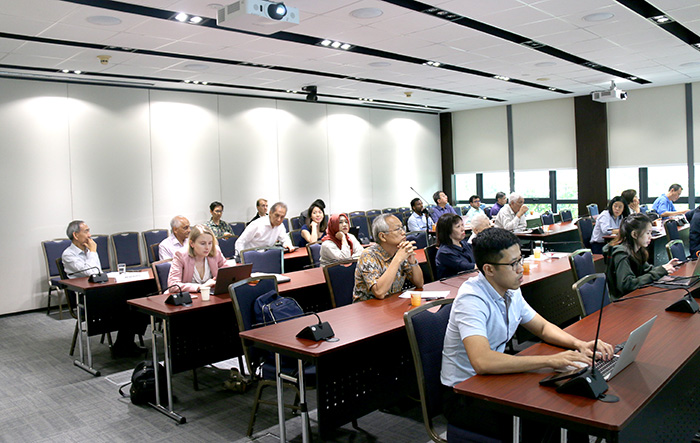