In this seminar, Datuk Dr Marzuki Mohamad sought to address the issue of intensification of the politics of race and religion in Malaysia after the 14th general election and its wider impact on Malaysian politics and society.

Tuesday, 14 October 2019 – Datuk Dr Marzuki Mohamad, Special Functions Officer to Ministry of Home Affairs (Malaysia), gave a lecture at ISEAS – Yusof Ishak Institute to share his opinions on the prevailing discourse for Islam and Politics within Malaysia. Datuk Marzuki concurrently holds an Associate Professor position at the International Islamic University Malaysia (IIUM), and had previously served as the political secretary to the Minister of Education (Malaysia) from 2013 to 2015. Dr Norshahril Saat moderated the event. 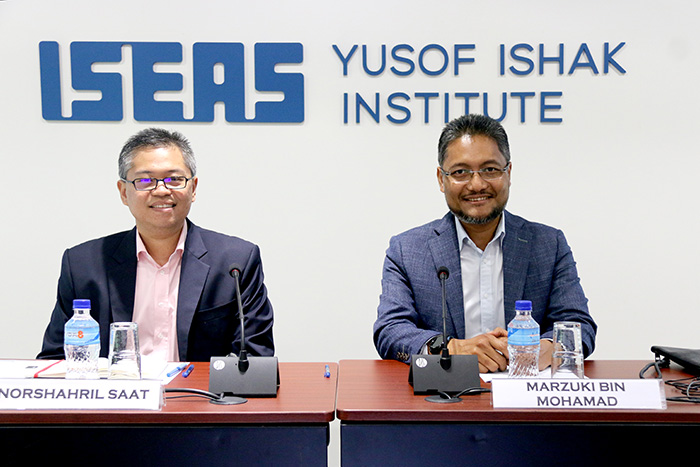 Datuk Marzuki began his seminar with an analysis on the impacts of Malaysia’s 14th General Election. Unlike the Barisan Nasional, no single component party within the Pakatan Harapan has a monopoly in decision making process. Instead, each party within the coalition is regarded as an equal partner, while decisions are made through consensus and negotiations amongst top leadership.

Datuk Marzuki subsequently provided an overview of the Islamisation trajectory since the 1970s within Malaysia. He opined that conservative Islamic groups gained the upper hand during the first two decades, where PAS and UMNO attempted to out-bid each other in terms of Islamic credentials. However, conservative Islamic ideologies lost salience during the 1990s and early 2000s with the advent of globalisation which brought about liberal values. The formation of Barisan Alternatif, where PAS allied with other secular parties, coupled with Barisan Nasional’s dependence upon Chinese electorate to retain political power in the aftermath of ‘Reformasi’ protests, further diluted the influence of conservative Islamic groups. In recent years however, particularly in run-up to the 14th General Election, the former regime had propagated an ‘Islam under threat’ discourse to fuel fears amongst the Malay electorate.

Lastly, Datuk Marzuki stressed the commitments towards the position of Islam within Pakatan Harapan. He shared that the budget for Islamic authorities at the Federal government (i.e. Jakim) has risen from 882 to 940 million Ringgit within the past year. In addition, there has been no amendments to the constitutional position of Islam since Pakatan Harapan took over. He added that the Pakatan Harapan government would practise moderation in order to satisfy the demands from both conservative and liberal Islamic groups.

During the question and answer session, one participant sought Datuk Marzuki’s opinions on Pakatan Harapan’s rationale during recent controversies pertaining to Khat and Zakir Naik. Another participant inquired if racial and religious identity would ever be decoupled in Malaysia. Datuk Marzuki also responded to a range of questions including the Shared Prosperity Vision, political developments in East Malaysia, and proposed amendments to child marriage, amongst others.

The seminar drew close to 70 attendees from diverse backgrounds including academia, private sectors, civil servants, reporters and members of the public. Former members of Parliament Hawazi Daipi and Zainal Abidin Rasheed, and Former Minister for Communications and Information Dr Yaacob Ibrahim, were amongst the attendees.