Thursday, 4 May 2017 – In this 12th instalment of the Arts in Southeast Asia Seminar Series, Ms Chinmiao Hsu gave a presentation titled, “Returning to the Roots: Lim Tze Peng’s Visions of the Nanyang Dream”. She obtained an MA degree in Asian Art Histories from the LaSalle College of the Arts in 2016; her research on contemporary Chinese ink artists in Singapore examined their development, issues of identity, and Chinese ink’s rejuvenation with Nanyang artists as historical references. More than thirty participants, including those from local universities, art institutions, private firms, and non-profit organisations, and members of the general public attended this seminar. 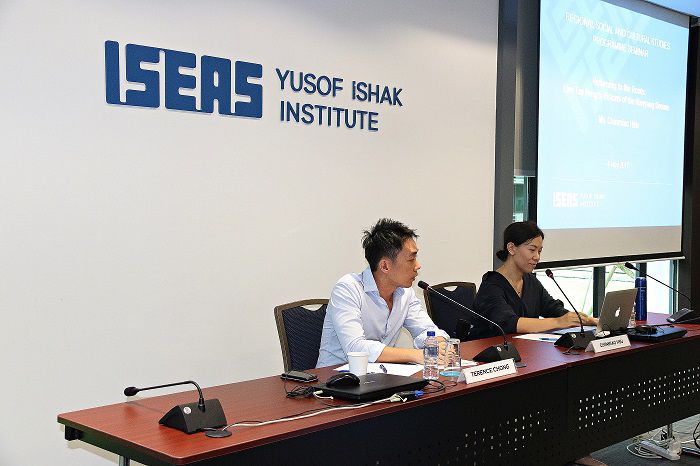 Hsu began by noting that Chinese ink’s recent history is one of decline and crisis. In the early 20th century, amateur and literati styles overtaking professional painters led to stagnation in innovation and techniques, and it became a troubling symbol of China’s lack of modernity in the pursuit of Westernisation. In the mid-20th century, the nationalists promoted it as part of China’s cultural richness, but its aesthetic disappeared as ink painting became utilitarian and functional under the communists. In the late 20th century, artists returned to the roots of tradition as a strategy to revitalise an indigenous art tradition in experimental ink painting.

Turning to the ‘Nanyang’ since the 1950s, Hsu observed that Chinese ink was used in the search for local identity rather than symbolising “Chineseness”. Answering Lim Hak Tai’s 1938 call for art to include a sense of “localness”, pioneer artists used local subject matters and mix Eastern and Western techniques, giving birth to the so-called ‘Nanyang Style’. However, Hsu showed how such “localization” was less effective as the “local” images lacked cultural depth and remained dominated by the Chinese aesthetic and the Shanghai School style that they were linked to. This made the Nanyang Style, with its Sino-centric moniker, problematic.

Turning to Lim Tze Peng, Hsu made a strong case for honouring him as a true Nanyang ink artist. For her, Lim is a maverick, a self-taught artist with no style to emulate or baggage to bear. With no master to mould him, he enjoyed artistic autonomy and turned to the environment as his teacher. Furthermore, Lim was born and raised in Singapore, observing the very details of life happening in the transforming city in the 1970s and 1980s that served as the basis of his inspiration, and has an intimate knowledge of the local culture of his artistic context. Lim’s therefore envisions his cultural image of Nanyang as a door to Singapore’s past.

Hsu showed how Lim engages local tradition as a Singaporean Chinese ink artist. Firstly, his details depict dynamic relationships and narrate stories. Secondly, he communicates intangibles – treasured values, local customs, and beliefs – and captures the quintessential kampong spirit in his paintings. Thirdly, he renders time irrelevant and brings forth what is timeless by juxtaposing old with new, and past with present. Hsu suggested that a sense of the conviviality of everyday life and warmth of relationships give a clue about the spirit and aesthetic of Nanyang in painting. Ms Hsu concluded by noting how Lim’s career of more than 60 years has spanned multiple generations of Chinese ink artists in Singapore, where multiculturalism serves as a context for the artist, even as the focus of the art form shift from “localness” to “globalness”. Members of the audience asked many questions, which allowed Hsu to share that Lim experimented with media other than Chinese ink, he had good relations with other Nanyang artists, and his work was rather representative of the Nanyang Style of the 1950s. She also elaborated on Lim’s move towards the abstract and experimentation with calligraphy in his literary tradition.

During the Q&A Hsu also shared about the public nature of her sources of information, her desire to continue her research on Lim, and how his work has evolved as Singapore changed over the years. The discussion also covered how Lim’s work fits into the loosely-defined Nanyang Style, yet is removed from the chronological context of the Nanyang Style, other ways of approaching the localization and abstraction found in the Nanyang Style, including using a “neo-Nanyang” or “post-Nanyang” framework to overcome the chronological constraints of the Style, and how his work should not be considered kitsch.