This seminar examines the social, spatial and material dimensions of remittances by the overseas Vietnamese community.

Friday, 21 June 2019 – Dr Ivan Small examined the social, spatial and material dimensions of remittances by the overseas Vietnamese community by drawing extensively on interviews he conducted with remittance receiving and sending households in Vietnam and California. His presentation was based on his latest book, Currencies of Imagination: Channeling Money and Chasing Mobility in Vietnam, which looks at the complex role of remittances that flow across and mediate between transnational kinship networks dispersed by exiles and migration. Going beyond the usual economic analysis of such monetary flows, Dr Small highlights the unfolding transformation of Vietnamese society through extensions of imaginations and ontological possibilities that accompany such flows. He highlighted four key findings. First, when it comes to homeland/diaspora relations, immigrants and refugees had different orientations, temporalities and mobilities. Second, remittances should not only be defined by money, but also gifts. Third, there was a qualitative correlation between remittance reception and aspirations for migration. Fourth, the effects of remittances were not only economic but also social and cultural, and play out differently depending on geography. 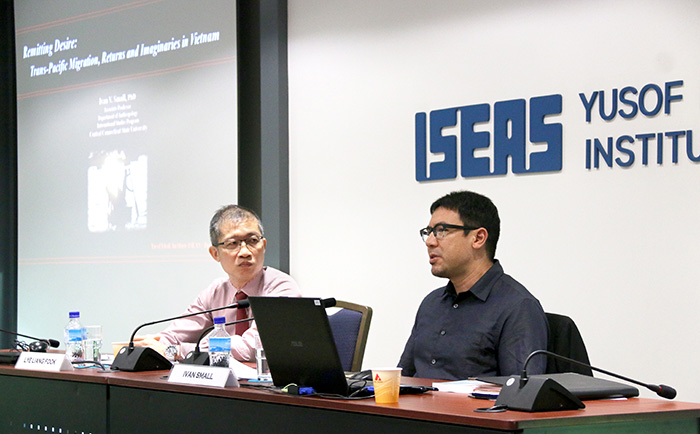 Items of value such as jewelry, electronics and watches played an integral part in the Vietnamese remittance culture. Some of these items were then resold on the Vietnamese black market for profit. Migrants also used creative ways to conceal money within everyday household items such as toothpaste as a means to avoid or circumvent checks by custom officials. Dr Small also shared that remittances co-functioned as gifts, which contained deeper meanings. While gifts bring people together through exchange, tensions are created based on what is exchanged and the relationships they maintain. And unlike money, gifts must be reciprocated. In the process, transnational relations between those that stayed on in Vietnam and the Vietnamese diaspora were constantly being reshaped.

To illustrate the correlation between remittance reception and migratory aspirations, Dr Small said that the recipients of such remittances often used the money they received to learn English and take up manicure lessons. They believed that such skills will help to prepare them for a future life abroad in America. Other recipients of such remittances would use the money they receive to build houses that were bigger and more opulent than their neighbours. This led to tensions and jealousies between households. Dr Small further shared that a number of those he interviewed in Quy Nhon, in central Vietnam, had made multiple attempts to flee by boat, albeit unsuccessfully. Despite such failures, the urge to flee to search for a “better life” remained.   There was a strong local belief that those who successfully migrated to America were helped by the whale god. Hence, in several instances, remittances that household received were used to build whale god temples in Quy Nhon. Such temples were either rebuilt or restored by the overseas diaspora as an expression of their gratitude for safe passage. The audience was made up of researchers and members of the public. (Credit: ISEAS – Yusof Ishak Institute)

Dr Small also responded to variety of interesting questions from the audience during the Q&A. The questions asked included whether the urge to migrate to America had waned over time, how the Vietnamese authorities managed the inflow of remittances, issues of identity and belonging towards their ancestral homeland by second or third generation born Vietnamese-Americans, and the extent of social integration of the Vietnamese community in California. The seminar was well-attended by an audience of over 30 researchers and members of the public.