In this seminar, Dr Wahyu Prasetyawan presented his paper on a quantitative analysis to understand the increasing influence of identity politics in the gubernatorial Jakarta election by examining empirical data from Village Potential Statistics (PODES) of Indonesia’s Central Bureau of Statistics (BPS) and voting data from the General Election Commission (KPU).

Tuesday, 3 December 2019 – In 2017, a massive religious mobilization – which later was named as 212 Movement– occurred prior to the Jakarta gubernatorial election. ISEAS – Yusof Ishak Institute invited Dr Wahyu Prasetyawan, a senior lecturer in Islamic State University (UIN) Syarif Hidayatullah Jakarta, to talk his empirical analysis on the religious mobilization, using the voting data of each urban village in Jakarta. ISEAS Visiting Fellow Mr Made Supriatma moderated the session. The talk drew an audience of 50 people, including scholars, students, members of the media and the public. 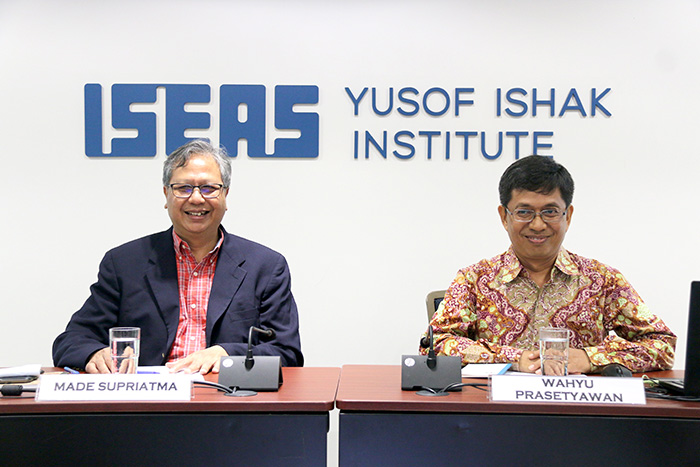 To begin his presentation, Dr Prasetyawan posed an interesting research question: why did identity politics, instead of Islamic populism or ethnicity, determine the 2017 election? The second round of this gubernatorial election pit together Mr Anies Baswedan, an Arab-Indonesian Muslim, and Mr Basuki Tjahaya Purnama (BTP), a Chinese-Indonesian Christian. The election was marked by cross-ethnic candidates, mounting public pressure, and increased solidarity among Islamic religious group. Dr Prasetyawan asserted the salience of religion to determine the outcome of the election.

While previous studies focused on campaign rhetoric and class-based sentiments during the election, Dr Prasetyawan’s research evaluates the extent to which Islam was exerted to become exceptionally influential in leading to Mr Baswedan’s victory. In most of the study of an election, scholars often focus on economic voting, social cleavages, ideology, and policies that would determine the outcomes. Dr. Prasetyawan tested all of those arguments but found that only Muslim variable that could strongly explain to Mr BTP’s defeat to Mr Baswedan in the second round of the Jakarta election.  His findings show that the higher Muslim population in one urban village was strongly correlated with the lower votes for BTP compared to Mr Baswedan. One interpretation of this finding would be that Muslim voters preferred to have a Muslim leader. So, other variables, such as competency of a leader and economic factors, are not significant in determining the result of the election.

Dr Prasetyawan further explained the underlying condition that determine Mr Baswedan’s triumph on Muslim voters’ mobilization. He argued that Mr Baswedan’s win was the results of the works of actors which he calls ‘the identity entrepreneurs.’ These entrepreneurs shaped the identity of Muslim voters and turned it as mobilizing tool. One of the prime examples of identity entrepreneur is Rizieq Shihab, a Muslim cleric, who are actively mobilize Muslims. Mr Shihab also the one who mobilized 212 movement and pressured the blasphemy case against Mr BTP. There are several prominent Muslim figures who acted as identity entrepreneurs during this election. The success of these entrepreneurs were boosted by the circulation of hoax news in the social media and the misuse of mosques to disseminate false information and to punish disobedient Muslims.

To conclude, Dr Prasetyawan said that economic voting and policy-based voting did not working very well during the Jakarta gubernatorial election 2017. Instead, the urban villages with majority Muslim in Jakarta voted overwhelmingly for Anies Baswedan. The tactic to force Muslims to ‘support leader from the same faith’ has successfully controlled the course of the election. The future of democracy in Jakarta, he said, would be very influenced by the play of identity politics. 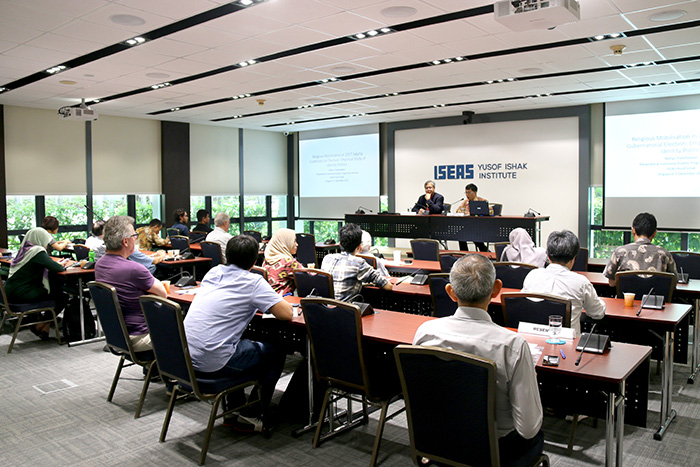 The talk drew an audience of 50 people, including scholars, students, members of the media and the public. (Credit: ISEAS – Yusof Ishak Institute)