Monday, 12 June 2017 – Dr Vannarith Chheang, a Visiting Fellow in the Vietnam Studies Programme at ISEAS, provided a succinct and in-depth analysis of the recent commune election results in Cambodia and what they portend for the national election in 2018. Dr Chheang emphasized that the commune election results represent a major change in Cambodian politics. The ruling Cambodian People’s Party (CPP) are losing their domination of rural politics in this largely agrarian country. The opposition Cambodia National Rescue Party (CNRP) increased their vote tally by 24 per cent in the 2017 commune elections compared with the 2012 ones while the CPP lost votes. In 2012, the CPP winning margin was roughly 20 per cent of the electorate, in 2017, it fell to about 7 per cent. 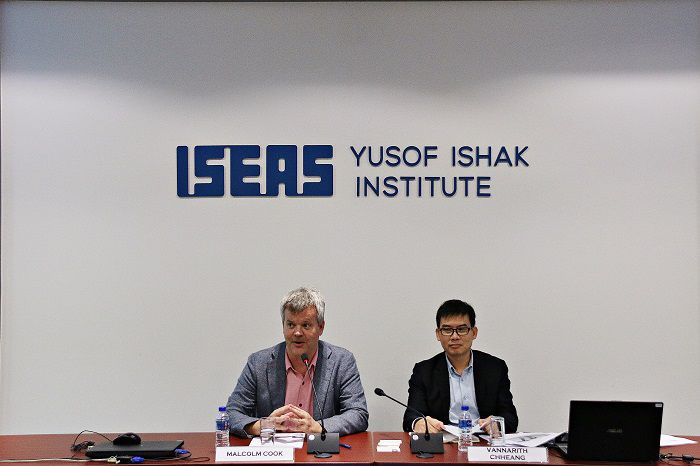 The major gains in votes and seats won by the CNRP in the 2013 national election and in the 2017 commune elections show that a power balance has been achieved in Cambodia. The 2018 national election could see a power shift to the CNRP. If so, this transition could be disorderly and potentially violent.

Urban voters, which favour the CNRP, in particular are focused on governance reform in Cambodia and a change after over three decades of CPP rule under Prime Minister Hun Sen, reducing the effectiveness of pork barrel politics. The spread of internet access is undercutting the effectiveness of the traditional media that are strong supporters of the ruling party. Cambodia’s youthful population, with over 60 per cent of the population under 35 years old, reduces the political traction of references to Cambodian modern history.

The 2018 national election will likely be a very important and possibly transformative one. The election itself and particularly the aftermath if the CNRP win need to be carefully followed given the possibility both of political change and political instability. Dr Chheang ’s succinct and cogent presentation led to a long and very engaged question and answer period with over fifteen questions asked. The questions and answers focused on the repeated threat of “civil war” in Cambodia if the CPP loses; the interests and influence of the U.S., China and Japan in Cambodian politics; CNRP foreign policy in relation to the U.S., China and Vietnam; the CNRP’s economic policies; ability to govern; and relations with the private sector; the possible role of the royal family as a unifying force; CPP succession plans; and likely CPP policy and campaign responses to the commune election results. The seminar was attended by more than 34 participants from government, the diplomatic corps in Singapore, the private sector and academia.