In this seminar, Dr Nicholas White, will consider the history of PNB in three parts: firstly, by analysing why PNB was formed; secondly, by looking at how its investment strategies and unit trust schemes were implemented in practice; and, finally, draw some tentative conclusions about the impact of PNB’s operations on the development of Malaysia’s economy and society since 1978.

Thursday, 4 July, 2019 – The seminar on the history of the Permodalan Nasional Berhad (PNB) was presented by Dr Nicholas J White, Professor of Imperial & Commonwealth History at Liverpool John Moores University and Co-Director of Liverpool’s Centre for Port & Maritime History. Dr White first emphasised the importance of PNB to the Malaysian economy by beginning with an overview of what PNB is. As a government linked investment corporation established in 1978, PNB is estimated to control 10-15% of KLSE, which is now known as Bursa Malaysia. More importantly, it is a major stakeholder in leading Malaysian companies such as Maybank and Sime Darby. It is also reckoned to be the largest unit trust scheme in the world under the management of Amanah Saham Nasional Bhd (ASNB). The PNB has a unique role as both investment company and fund manager. 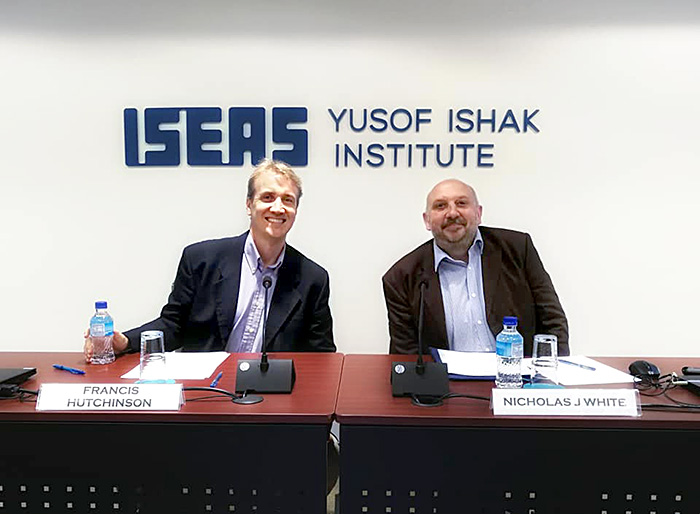 Dr White went on to consider the history of PNB in three parts. He first analysed why the PNB was formed and highlighted that there was economic marginalisation of Malays and other “Bumiputra”. There was also significant inequality between different sectors.  There was severe income disparity between the traditional agricultural sector and the rest of the economy in Peninsular Malaysia.

Secondly, he talked about the implementation of the PNB and the factors required for the PNB to be successful, such as a massive marketing campaign from federal to state to district level. Due to large scale marketing, there was a big take up rate after 1981 with more feedstock through economic decolonisation.

Dr White said that the impact of PNB is controversial: for one, they give very good returns, with dividends and bonuses consistently higher than equivalent savings and investment schemes. PNB also had a broad spectrum of investors, particularly the lower income group- 62% of total investors were labourers, fishermen, housewives and farmers. PNB’s activities increase financial literacy, with a subtle blending of marketing and education. The PNB was also important in diversifying the Malaysia economy, particularly in property and manufacturing sectors. Thus, the confidence in PNB is epitomised by the high take up of non-bumiputra allocations. With that said, Dr White also presented the less successful aspects of PNB: They have had less success in promoting bumiputra vendors and distributors further down the supply chains. Apart from the limited results of vendor promotion, there is also growing disparity in the size of unit holdings.

Dr White concluded that the real impact can only be measured through looking at the changes to the lives of individuals as well as that of their families. Investors come from a variety of backgrounds, but they all cite common reasons for ASB investments such as excellent rate of rate, low risk and security, ease of withdrawing investment, aid in debt payment, access to education, healthcare and property ownership. The good investment in turn encourages loyalty and reinvestment. He opined that SOES are “grabbing hands”, while PNB is more of a “helping hand” for the lower income strata.