A+ A-
In this 19th instalment of the Politics of Art in Southeast Asia seminar series, Ms Cheng Nien Yuan, PhD candidate at the University of Sydney’s Department of Theatre and Performance Studies, examined Singaporean Tan Pin Pin’s film In Time to Come (2017) against her broader oeuvre.
REGIONAL SOCIAL AND CULTURAL STUDIES PROGRAMME SEMINAR

Monday, 29 October 2018 – In this 19th instalment of the Politics of Art in Southeast Asia seminar series, Ms Cheng Nien Yuan, PhD candidate at the University of Sydney’s Department of Theatre and Performance Studies, examined Singaporean Tan Pin Pin’s film In Time to Come (2017) against her broader oeuvre. Twenty-two participants were in attendance, hailing mainly from research institutions and university faculties. Ms Cheng began by noting that In Time to Come, a time capsule of a film, is marked with ambivalence. On one hand, it was partly supported by official bodies. On the other hand, as an audience member during an overseas screening indicated, it was ‘clearly’ a rebellious film. This tension between being a client and critic of the Singapore state, in Ms Cheng’s view, likewise describes Tan herself. Ms Cheng thus proposed to discern the social and political meanings of Tan’s art by focusing on the contextual elements of her films. Tan’s films play with performative frames, said Ms Cheng. Performative frames work by bracketing out a certain activity for a given audience, intensifying awareness that leads people to expect a special occurrence. By drawing attention to these frames, questions concerning what is worthy to be counted as ‘performance’ are asked. In Singapore GaGa (2005), Ms Cheng contended, Tan raises these questions primarily by directing her audience’s attention to local buskers and street vendors, people often neglected by passers-by. However, in the face of state policy changes that seek to draw out narratives from the ordinary, dubbed by Ms Cheng as the advent of the “storytelling state,” Tan’s critical gaze appears to have shifted. In Time to Come documents only the beginnings and endings of official ‘performances,’ deliberately withholding airtime from the event itself. Ms Cheng read this as signalling Tan’s refusal to create performative commodities, an implicit critique of the state’s new direction. 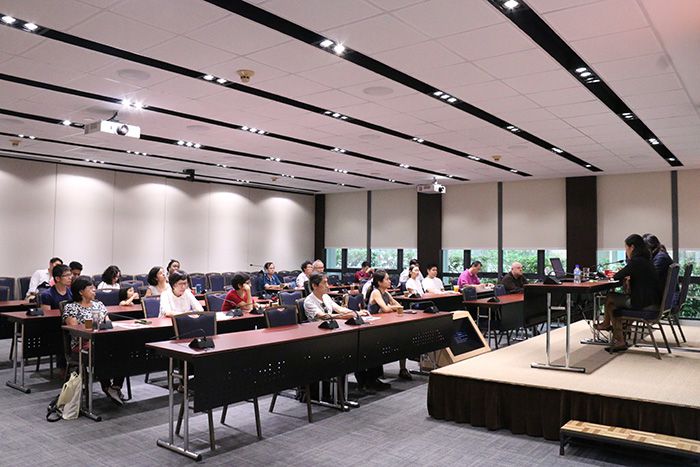 Ms Cheng then touched on the embodied, emotional, and affective aspects of Tan’s works. In To Singapore, with Love (2013), Ms Cheng argued that in focusing on the domestic and personal lives of political exiles, Tan counters the instrumental rationality of the Singaporean state. As the state started to utilise the medium of personal narrative as well to advance its own objectives, Ms Cheng posited that Tan’s film has become more subversive over time, with Tan’s choice of narratival subject standing in starker and starker relief. In Time to Come takes a different tack. By offering no object for easy emotional attachment, Tan makes the audience work to ‘make sense’ of the images on screen, images that are otherwise familiar to Singaporean everyday life. Through this, Tan implicitly advocates for a more participatory form of citizenship where people actively create meaning from the things around them.

Finally, Ms Cheng noted the liminal, ‘non-places’ of modernity present in Tan’s films, which take especial prominence in In Time to Come. These ‘non-places,’ for Ms Cheng, serve as a reminder of Singapore as a work-in-progress, as involving contingent processes that come at a human cost. During the lively Q&A session that followed, queries and comments revolved around the film-maker’s motivations, creative processes, and filmmaking skill.