This seminar was organised by the ASEAN Studies Centre at ISEAS – Yusof Ishak Institute, and delivered by Professor Dr. Evelyn S. Devadason, Professor at the Faculty of Economics and Administration, University of Malaya.

Tuesday, 27 August 2019 – The ASEAN Studies Centre at ISEAS – Yusof Ishak Institute organised a seminar on “Non-Tariff Measures in ASEAN: Is Protectionism on the Rise?”, delivered by Professor Dr. Evelyn S. Devadason, Professor at the Faculty of Economics and Administration, University of Malaya. The seminar was chaired by Dr. Tham Siew Yean and drew an audience of around 40 academics, diplomats, business people, and members of the public. 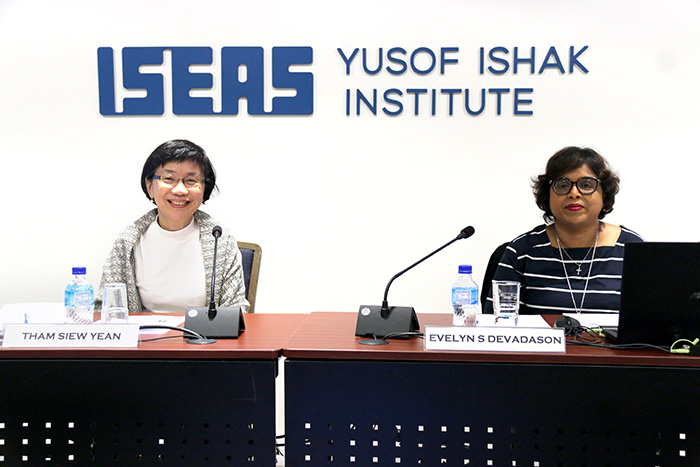 First, Professor Devadason set the context of “new protectionism” in the 21st century that includes public policy instruments which serve a dual purpose of a public policy objective, but can also be protectionist. This was generally seen as a North-South issue in the past, but has now moved into the policy space of the South-South agenda, including that of Asia-Pacific economies. ASEAN has recognised that dismantling NTBs and reforming protectionist NTMs is a primary challenge in order to expand intra-regional trade by USD9.2 trillion by 2050, and has set a target to reduce the trade transaction costs incurred by these NTMs by 10% by 2020.

She then highlighted the importance and difficulties in distinguishing protectionist from legitimate NTMs such as sanitary and phytosanitary (SPS) measures and technical barriers to trade (TBTs). Legitimate NTMs serve public policy objectives such as protecting the consumers from concerns such as health and safety issues, but might still contain subtle protectionist elements and can be used to serve protectionist intentions. As these “behind-the-border” policy instruments are qualitative, heterogeneous across products and countries, opaque, difficult to monitor, and their impact is often unclear and difficult to measure, countries tend to misuse NTMs for political reasons. Therefore, looking beyond direct trade barriers is vital; the focus has to be extended to “hidden” protectionism encapsulated in NTMs.

Professor Devadason further explained that there is no clear cut criteria to identify or assess “hidden” protectionism in NTMs, as one country’s legitimate policy concerns may be construed as protectionism in disguise. She described ways of detecting potential “hidden” protectionism and underscored the need to recognise that NTMs are often presented as a package and not as single standalone measures. More importantly, the restrictiveness or complexity of NTMs are compounded by specific procedural requirements involved in complying with any given regulation.

A profile of the latest NTMs in ASEAN based on the databank collected by the Economic Research Institute for ASEAN and East Asia (ERIA) and the United Nations Conference on Trade and Development (UNCTAD) was later presented to show the extent and prevalence of NTMs in the region. First, standard-like NTMs (TBTs and SPS) are the most frequent forms of NTMs used in ASEAN and are generally applied on a multilateral basis. Second, agriculture and foodstuffs are subject to a much larger number of standard-like NTMs in ASEAN compared to other sectors. Third, the highest concentration of SPS and TBT measures in ASEAN is related to product characteristics. Fourth, the transparency of SPS and TBTs remains an unresolved issue as some ASEAN member states tend to understate its notifications at the WTO. Finally, low Ad Valorem Equivalents (AVE) do not necessarily reflect efficient import processes.

Examples of “murky” NTMs/NTBs; namely, discriminatory or harmful NTMs, procedural obstacles, and regional regulatory policy divergence were also discussed. Professor Devadason explained that domestic procedural obstacles directly associated with reported standard-like NTMs account for a large part of the “hidden” barriers in ASEAN. As the application and administration of NTMs is generally country-specific, more work is needed to identify these potentially discriminatory but concealed applications in NTMs. She described the reduction of domestic barriers as a low-hanging fruit, as it is much simpler for a country to reform its procedural framework than to pursue reforms at the regional level. The seminar drew an audience of around 40 academics, diplomats, business people, and members of the public. (Credit: ISEAS – Yusof Ishak Institute)

Lastly, Professor Devadason gave some recommendations for tackling “hidden” protectionism in the region using a two-step approach. First, regulatory reform for new standard-like NTMs at the national-level of member states will remove unnecessary and “hidden” barriers. Second, identifying where regulatory convergence can be promoted at the regional level will reduce opacity and discourage “hidden” protectionism”.