A+ A-
Professor Duncan McCargo of the University of Leeds spoke at an ISEAS Thailand Studies Programme seminar on the country’s proposed 2019 elections and on the parties likely to contest them.
THAILAND STUDIES PROGRAMME SEMINAR


Thursday, 26 July 2018 – Professor Duncan McCargo of the University of Leeds spoke at an ISEAS Thailand Studies Programme seminar on the country’s proposed 2019 elections and on the parties likely to contest them. His seminar included an assessment of whether several newly formed political parties in fact represented new choices for Thai voters. Years of political turmoil––characterised by repeated elections, a pair of military coups, rounds of constitution drafting, frequent recourse to street politics and mass rallies, and the repeated postponement of elections by the current military regime––have polarised Thailand. In the context of uncertainty over the country’s constitutional and legal apparatus and of political actors’ varied understandings of that apparatus, McCargo warned that any predictions of what would happen next could only be tentative.

McCargo highlighted salient features of the 2017 constitution that could shape the Thai electoral landscape. For example, the multi-member apportionment system for electing members of the lower house of parliament will benefit medium-sized parties, currently non-existent in Thailand. He said that the constitution had been repeatedly redrafted since 2015 to create a situation in which forces backing former Prime Minister Thaksin Shinawatra could be prevented from winning. However, he added that changing the constitution would not have a substantial impact if voters’ preferences remained unchanged. Despite apparent shifts in political allegiances in some provinces, as reflected in the referenda on the 2007 and 2016 constitutions, anti-regime sentiments remain predominant  in the populous North and Northeast, the core regions of support for Thaksin. 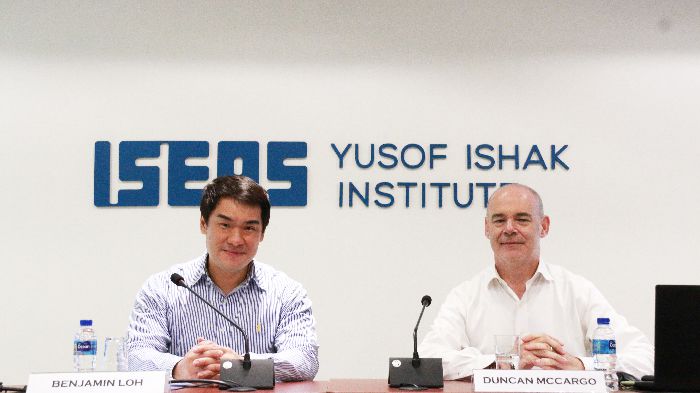 According to McCargo, the pro-Thaksin Phuea Thai Party and anti-Thaksin Democrat Party are facing difficulties in identifying new leaders likely to attract electoral support. Despite their common agenda of returning Thailand to representative politics, he said that the possibility of collaboration between the two parties remained slim and that efforts to effect such collaboration might in fact exacerbate political polarisation in the country. Collaboration between the two parties would require voter education and  communications designed to induce their respective supporters to set aside their differences and coalesce. However, he said that neither party was willing to engage in these processes for fear of losing support among members of its base.

McCargo highlighted three new political parties with prospects of winning seats in next year’s anticipated elections. He noted that none of them had prospects for substantial electoral success. Out of the three, he argued that only the Future Forward Party offered novel political ideas. However, the chance of the party’s youthful leader, Thanathorn Juangroongruangkit, being elected as a constituency member of parliament is slim, and this would make it difficult for his party to do well in the new multi-member apportionment electoral system. He said that the other two parties––Phalang Pracharat and Action Coalition for Thailand––appeared set to campaign on issues similar to those stressed by existing political parties. It remained to be seen, too, if these latter two parties were not simply meant to give cover for the continuation of de facto military rule. For example, the Action Coalition for Thailand Party is leveraging on the “Restart Thailand” rhetoric that fueled anti-Thaksin and anti-Yingluck sentiments in the past. And while orchestration of the selection of incumbent Prime Minister Prayut Chanocha to return to that position was theoretically possible, McCargo said his governing the country without substantial political support in the parliament would be challenging.