This 1.5-hour seminar revealed an increase in territorial consolidation and socio-economic complexity which initiated a dense settlement pattern in this highland region from the 14th century. Dr Tjoa-Bonatz presented her findings about a highland kingdom founded by Indonesia’s last Hindu-Buddhist king, Ādityavarman (r. ca. 1343–75). Using both material culture and stone inscriptions as evidence, the research shows the vitality of a highland centre of power at a site known today as Bukit Gombak, in the Minangkabau region of West Sumatra. This site showed a settlement from the 14th to the 17th century. Dr Tjoa-Bonatz argued that this was the site of the original political and socio-economic centre of the Minangkabau region before it shifted to Pagaruyng and probably the royal centre of king Ādityavarman. Dr Tjoa-Bonatz’s analysis will be published as a monograph, and is the result of archaeological excavations and research since 2011. The contribution to Minangkabau history is significant because not much is known about the early history, settlement processes and state formation of the Minangkabau. This is also the first scholarly attempt to write early Minangkabau history using archaeological data. This is augmented by various dated stone inscriptions from this early phase of history.

The archaeological data reveals both locally made and imported artefacts, domestic housing based on postholes, ritual spaces, the development of specialised crafts like metalworking, dense habitation and manufacturing activities. The economy was sustained by a surplus through wet rice cultivation, well-endowed by natural resources including gold, and geographic features that enhanced connectivity with the coastal areas, and integration with coastal maritime economies that were linked to the global maritime trade networks. The data and features point to state formation processes as early as the fourteenth century, as Ādityavarman’s kingdom advanced towards territorial consolidation and increasing socio-economic complexity, as well as socio-political integration, as evidenced by ceremonial structures and the stone inscriptions. 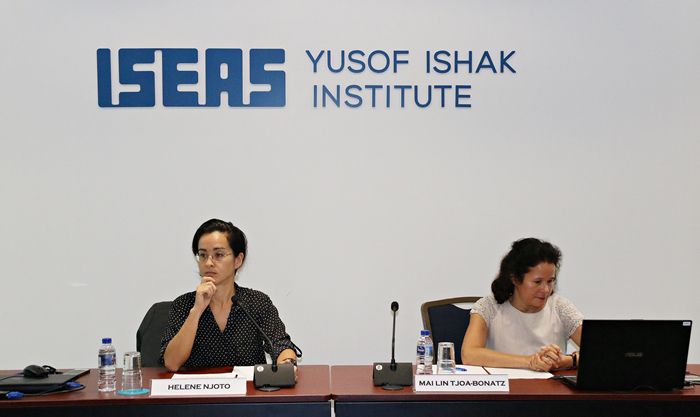 Both Dr Tjoa-Bonatz and Dr Hélène Njoto taking questions from the audience after the presentation (Source: ISEAS – Yusof Ishak Institute)

Dr Tjoa-Bonatz’s research is significant for its focus on a highland kingdom as a centre of political and economic expansion, versus the more common studies of coastal polities, and offers an alternative model of state formation where a highland polity plays a dominant role. The data also suggests a revision of the fifteenth century as the starting point for the modern period of Southeast Asian history to the fourteenth century. Ādityavarman’s kingdom shows that the processes of state formation had already commenced in the fourteenth century.