This 1.5-hour afternoon seminar showed how understanding the art historical context in Asia preceding the war was crucial to measure the impact of the Japanese artistic campaigns in Southeast Asia. The speaker, Mr Antariksa demonstrated how strong debates had split the Japanese art world since the late 19th century between advocates of traditional Japanese artistic conventions, techniques and materials (Nihonga) and supporters of modern art inspired by the West (Yōga). 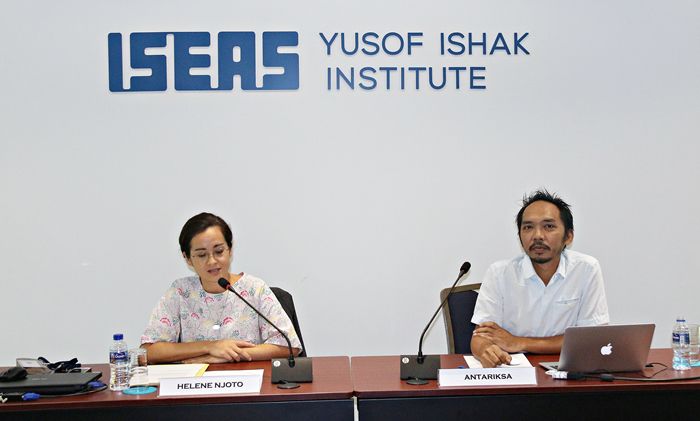 Wednesday, 28 September 2016 – This seminar was the fourth in the Regional Social and Cultural Studies Programme’s Seminar Series dedicated to Arts in Southeast Asia. The Series welcomed its first speaker from Indonesia, Mr Antariksa, an independent researcher sponsored by the Fukuoka Asian Art Museum and the Yokohama Museum of Art in Japan. His presentation entitled “Japanese Artists and Art Policy in Japanese-occupied Indonesia and Singapore, 1942-1945” was attended by an audience of more than 40 participants comprising art historians, curators, students, lecturers and practitioners.

Mr Antariksa began by reminding the audience that although history of the Japanese occupation in Southeast Asia has been thoroughly studied, the history of their artistic educational endeavour in the region remains largely unexplored. His study, supervised Professor Masahiro Ushirosoji, is an attempt to understand the impact of this endeavour on Southeast Asian, particularly Indonesian, artists and early artistic movements.

The speaker emphasised the importance of historical context of the study. Although for the West the “Pacific War” started in 1939, but for the Japanese “the Great Japanese War” started in 1931 with the invasion of Manchuria. As Japan was well aware of the potential of artists and the arts to achieve her war goal, more than 2500 mostly professional Japanese artists were sent to war zones. In line with this effort, Japan sent 300 artists to Southeast Asian occupied zones from the 1940s onwards. Mr Antariksa showed how understanding the art historical context in Asia preceding the war was crucial to measure the impact of the Japanese artistic campaigns in Southeast Asia. He demonstrated how strong debates had split the Japanese art world since the late 19th century between advocates of traditional Japanese artistic conventions, techniques and materials (Nihonga) and supporters of modern art inspired by the West (Yōga). The Yōga trend grew stronger before and during the war, as some of these Japanese artists, trained in the West, championed contemporary trends in modern art. Advocates of this trend were driven by the desire to create a pan-Asian modern art rivalling Western art techniques and creativity. Mr Antariksa showed how this trend in fact led the Japanese to contribute to the Westernisation and modernisation of the arts in Southeast Asia despite their so-called anti-Western artistic campaigns.

Mr Antariksa also presented a few works from Japanese masters such as Tsuguharu Fujita, Tsuruta Gorō, Koiso Ryōhei, Saburo Miyamoto, and Saseo Ono produced in Singapore and Indonesia. Some of them are found in Singaporean, Japanese and Dutch archives. Through a number of examples, he showed the influence of these paintings during the Japanese occupation period and the period that immediately followed it. An example is the introduction of mural painting by Saseo Ono, a technique copied as early as 1945-1949 by iconic Indonesian artists such as Affandi and Sudjojono. Another example of the impact of Japanese painters was the painting by Saburo Miyamoto depicting the meeting held at the Ford Factory where the surrender of Singapore to Japan was signed 15 February1942. According to the speaker, it gave birth to a new trend in using face-to-face meetings between enemies as an allegory for war and confrontation.

Mr Antariksa also showed how the Japanese military organisation of the occupied territories in three wide administrative zones (25th Division, 16th Division and the Navy) allowed a smoother distribution of artistic equipment and exhibitions throughout Southeast Asia. This also facilitated the circulation of artists in previously neglected areas such as Sulawesi, Sumatra and small towns like Jember in Java. Another original finding shared by Mr Antariksa, was the impact that the Japanese method called “Genba Shugi” (translated by him as “on-locationism”) might have had on the first generation of left wing artists in Indonesia. This method was to display works of art and propaganda among the population in common civic spaces to reach a wider audience among the population. According to Mr Antariksa, this was imitated by Indonesian left wing artists between 1955 and 1965 and given the name “Turba”, or turun ke bawah in Indonesian, meaning “reaching the grassroots”. 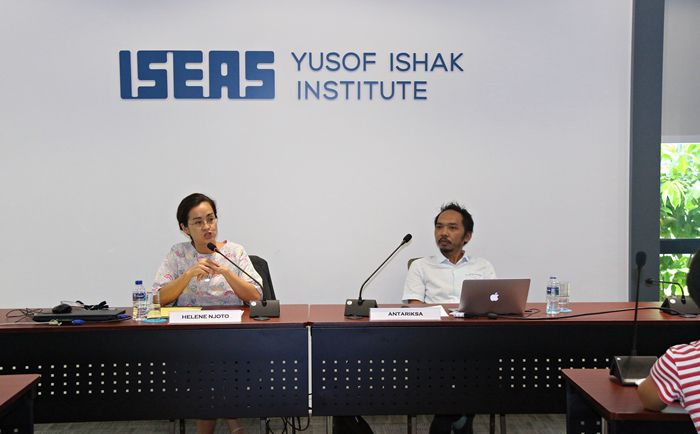 The enthusiastic audience asked many questions including those about the painter Lee Man Fong’s time in an Indonesian prison, the role of photographers in perpetuating war propaganda and art, the role of the Balai Pustaka, the enrolment of women artists and non-Japanese artists (such as Koreans, and others) in the Japanese army.

The seminar was attended by more than 30 participants.