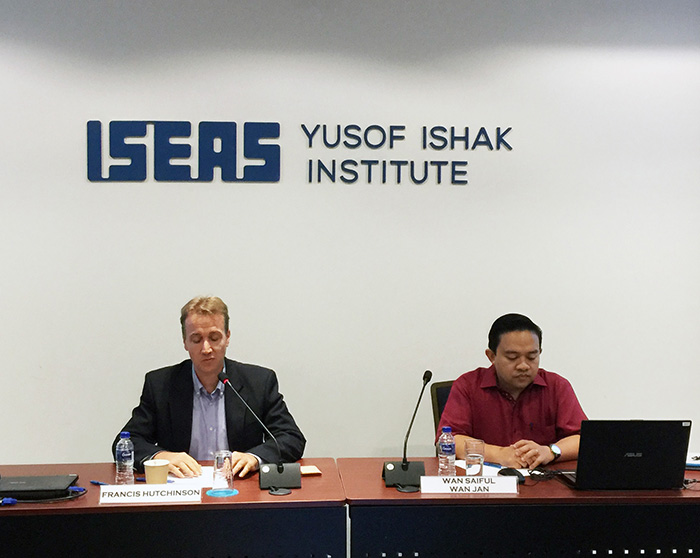 Both parties are working together in the Pakatan Harapan coalition, with the Democratic Action Party (DAP) and the People’s Justice Party (PKR). Together, they are claiming that they have a good chance to win in the southern state of Johor, which is traditionally seen as the bastion of UMNO. In the seminar held today, Wan Saiful Wan Jan, Visiting Senior Fellow at the ISEAS-Yusof Ishak Institute, outlined his analysis of how UMNO might fare in Johor in the next general election, especially in light of the presence of the two new parties.

Wan Saiful started by explaining the political background of Johor. In the last general election, the UMNO-led coalition, Barisan Nasional, won 38 of the 56 seats in the state legislative assembly. UMNO itself won the lion share, with 32 out of the 38 seats. The opposition Pakatan Rakyat coalition, made up of the Democratic Action Party (DAP), Parti Keadilan Rakyat (PKR) and Parti Islam Se-Malaysia (PAS), won 13, 1 and 4 seats respectively. This makes UMNO the most dominant party in the assembly, which is a continuation of their dominance in the state since the first elections in 1955.

Johor today is rather mixed in terms of ethnic composition. Only 54 percent of Johoreans are ethnic Malays, while 33 percent are ethnic Chinese, and the rest are the ethnic Indians and others. When the ethnic distribution is mapped out against the political parties that won in the last general election, it can be seen that there is a correlation between the size of the Malay voters in a particular constituency and the successful party. UMNO and BN are strong in the more-Malay areas in the eastern part of the state, while in the more mixed areas in the west there are more representatives from the opposition parties. The challenge for UMNO is that only 14 out of the 56 state seats have a high percentage of Malay voters (more than 70 percent Malay), whereas the other 42 are more mixed.

Wan Saiful described how the two new Malay parties – PPBM and Amanah – are actively working to steal the thunder from UMNO. They have set up offices in all constituencies across the state, and their campaign activities take place almost daily. But polling numbers show that they are not making so much impact yet. In a recent Johor survey commissioned by ISEAS-Yusof Ishak Institute, it was found that only 18 percent of Johoreans favour PPBM, and 14 percent favours Amanah. When narrowed down to Malay voters, the numbers look equally bad for the two. Only 21 percent of Johor Malays favour PPBM, and 13 percent favours Amanah. These indicate that both parties have a long way to go before they can be a real challenger to UMNO. In the Q&A session, the audience posed a wide range of questions, covering issues not just in Johor but also nationally. There was a keen interest on the likelihood of a Malay “tsunami” to complement the Chinese “tsunami” that contributed to a weakening of UMNO and BN in previous elections. Wan Saiful explained that, from his fieldwork, he found that ethnic Malays are still very cautious about the possibility of losing Malay political power if UMNO was removed from office. This fear may well be the factor that will save UMNO once again.