Friday, 23 August 2019 – Dr Dino Patti Djalal, the former Indonesian Ambassador to the United States from 2010 to 2013, and the founder and head of the Foreign Policy Community of Indonesia, a non-profit and non-partisan think-tank based in Jakarta, delivered a seminar on “Indonesia’s Foreign Policy under President Jokowi” to an audience of eighty diplomats, civil servants, researchers, journalists, and members of the public at the ISEAS – Yusof Ishak Institute. Dr Djalal discussed President Jokowi’s foreign policy in terms of its departures from the policies and style of his predecessor, President Susilo Bambang Yudhoyono. One example of this was President Jokowi’s willingness to sink illegal, unreported and unregulated fishing vessels that had strayed into Indonesian waters, which is part of his policy to secure Indonesia’s maritime interests.  From 2014 to May 2018, a total of 503 vessels has been sunk, of which the majority were flying the Vietnamese flag. Dr Djalal also characterized President Jokowi’s foreign policy style as practical, direct, commonsensical and open-minded. The President did not like abstract, grand ideas, but was always focused on the practical economic benefits that a proposal could bring to Indonesia.

Dr Djalal identified the first two to three years of Jokowi’s first term as the most challenging period in terms of foreign policy. This was partly due to the considerable domestic issues confronting the fledging administration, such as consolidating its political base, developing a viable economic strategy and infrastructure, and reforming the bureaucracy. Furthermore, issues over the death penalty created bilateral rifts with international partners such as France, Australia, and Nigeria. The lack of foreign policy expertise in the Presidential Office did not help matters.

One key theme that emerged from President Jokowi’s first term was the primacy of economic diplomacy. After highlighting the various trade agreements secured between 2015 and 2019, Dr Djalal suggested it is likely that foreign policy will remain as a secondary concern for President Jokowi in the second term, with domestic priorities occupying most of his attention, just as was the case in his first term. 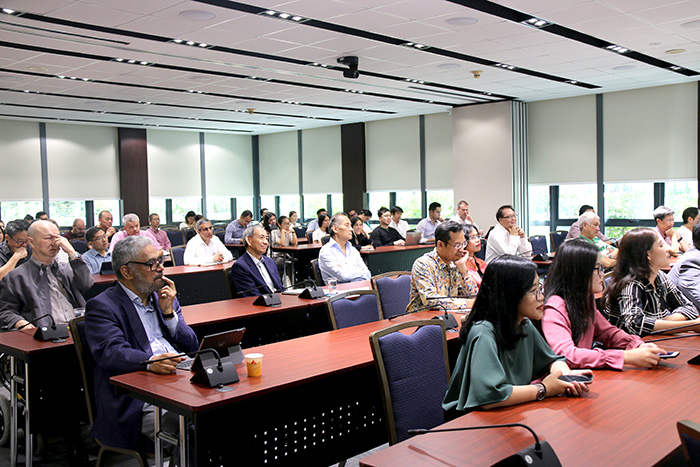 During the Q&A session, Dr Djalal fielded questions about the state of relations between Singapore and Indonesia, and Indonesia’s position in the increasing rivalry between China and the United States, among others.