Monday, 13 August 2018 – In Indonesia’s upcoming presidential elections, to be held in April 2019, incumbent President Joko “Jokowi” Widodo will again face Prabowo Subianto. Jokowi announced that he will be running with Islamic cleric Ma’ruf Amin as his vice presidential candidate, whilst Prabowo chose to run with Jakarta Deputy Governor and fellow Gerindra party elite, Sandiaga Uno. Hosted just days after the announcement of these nominees, at this seminar Dr Eve Warburton, a Visiting Fellow in ISEAS Yusof Ishak Institute, Dr Djayadi Hanan, Executive Director of Saiful Mujani Research and Consulting, and Mr Thomas Power, doctoral candidate at the Australian National University’s Department of Political and Social Change, shared their insights on the nomination process and what to expect in the upcoming presidential campaigns. 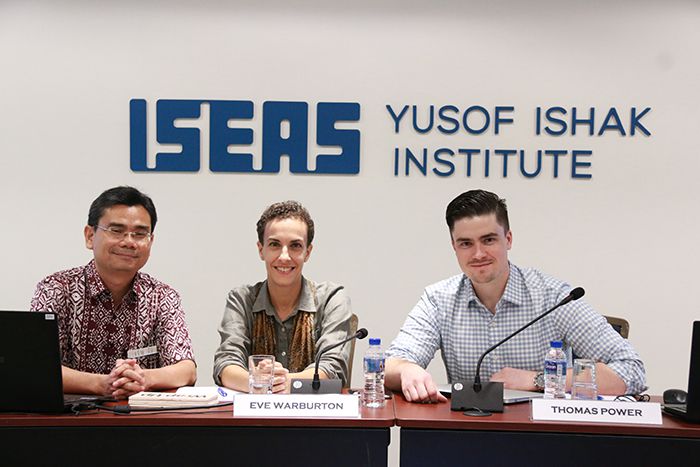 Dr Warburton began by providing the context for Indonesia’s 2019 presidential elections. She reminded the audience of what transpired when back in 2014, when Jokowi and Prabowo faced each other in what was Indonesia’s most polarizing presidential election. Jokowi won, albeit narrowly, and in the years that followed he set about consolidating his power and pursuing his developmental strategy for the nation. In response, voter satisfaction has been on an upward trajectory for years. However, the Islamist mobilizations against Jakarta’s Governor and Jokowi ally, Ahok, in 2016 and 2017 changed the electoral landscape and made Jokowi feel politically vulnerable. Since that point, Jokowi has since been focused on neutralizing the political threat posed by Islamist groups and figures. Mr Power’s presentation focused primarily upon explaining the logic behind each presidential candidate’s choice of running mate. Mr Power argued that Jokowi’s priorities were threefold: identify the most electable running-mate, reduce his vulnerability to attacks on his Islamic credentials, and protect the cohesion of his coalition to avoid a third axis. Nevertheless, Mr Power argued that Jokowi was perhaps overly cautious in addressing these three concerns as he boasts high approval ratings and had early guarantees of support from most parties in cabinet.

That exaggerated sense of vulnerability led Jokowi to cave to his coalition partners’ demands when it came to the VP nomination. Mr Power argued that Jokowi’s last-minute decision to choose Ma’ruf Amin as his running mate, and drop his preferred candidate of Mahfud MD, was a response to party leaders’ demands. Mahfud’s rejection by party leaders was an effort to preclude him from competing in the 2024 presidential elections; Mahfud also had an “anti-party reputation” and connections to pluralist volunteer groups. By allowing his coalition partners to effectively ambush him, Mr Power said Jokowi has run the risk of being criticized as weak and as a puppet president of party elites.

On the other hand, Mr Power suggested that Prabowo ultimately outperformed Jokowi during the nomination process through his skillful management of the opposition coalition. For the first time, a pair of candidates for president and vice president come from one party – Prabowo’s Gerindra party; Prabowo subverted Susilo Bambang Yudhoyono’s (SBY) attempts to kick start a political dynasty by denying SBY’s son the VP ticket, and he overcame the demands of Islamic parties and Islamist groups to choose their favored candidate parties. However, Prabowo is still the underdog. He does not have access to as many material resources, or state infrastructure, like the incumbent does, and so he has a mountain to climb in terms of resourcing and campaigning. Then Dr Hanan provided survey results, statistics, and head-to-head matchups demonstrating how Jokowi is in a much better position a year before these elections compared to SBY in 2008. Jokowi also enjoys higher confidence levels than SBY and continues to fortify his strongholds. Dr Hanan also gave an analysis of the main economic issues of Jokowi’s government in 2018 compared to SBY’s in 2008, showing Jokowi is in a very strong position as the incumbent. Nevertheless, when Jokowi needed to show his leadership the most, Dr Hanan believes that Jokowi’s pick for VP instead showed weaknesses, both through process and choice. Overall, Dr Hanan expected to see more emphasis on economic issues compared to religious issues in the upcoming elections. Towards the end of the seminar, the audience engaged with the speakers in an energetic Q&A session that saw a range of topics: the lack of regional representation amongst the nominees, the lack of public attention paid to Prabowo’s human rights record, polarising ideologies and conservative Islam, future business policies, and the responses of the Indonesian-Chinese. In the end, the speakers held that Jokowi is in a better position to brace the coming eight months of campaigning. Only time will tell whether the decisions of each candidate will pay off or backfire.