Dr Sri Lestari Wahyoeningroem shares her analysis and assessment on the latest developments in West Papua, and possible considerations to avoid further conflict.

Wednesday, 5 September 2019  – West Papua is in turmoil. To understand the latest developments in the easternmost province of Indonesia, ISEAS – Yusof Ishak Institute invited Dr Sri Lestari Wahyoeningroem to share her analysis and assessment. The lecture drew around 27 attendees comprising diplomats, academics, government officials, activists, journalists and members of the public. 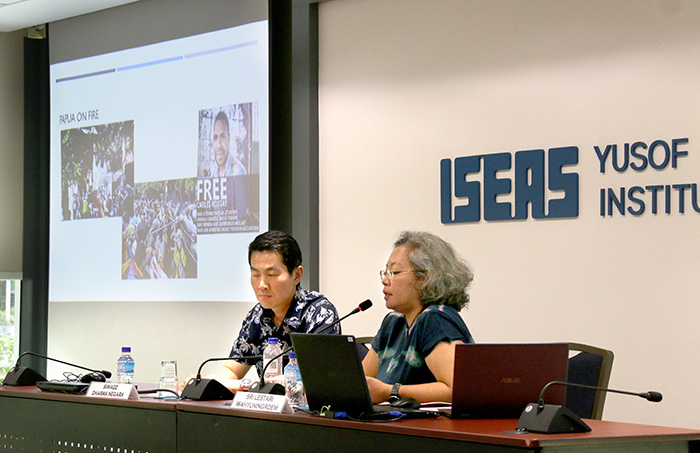 West Papua has always been a complex issue for Indonesia. The province was not originally part of the country when Indonesia proclaimed her independence on August 1945. As a result, the issue of separatism has remained a long-standing political concern for Indonesia since the incorporation of the region to Indonesia in 1969.

Dr Ayu began her presentation with a discussion on the misrepresentation of the Papuans in the Act of Free Choice or Penentuan Pendapat Rakyat (PEPERA) on 2 August 1969. For many Papuans, the PEPERA was interpreted as the Act of No Choice, since only 1,025 people were allowed to vote under the military control. Moreover, the voting system was designed by the Indonesian government, not by the United Nations. The Free Papua Movement (OPM) has been fighting for independence ever since the Indonesian military’s presence in the region in 1962.

In 2001, the Indonesian government granted special autonomy to Papua in order to curb separatism. The status gives broader autonomy to Papuans to administer their local government. Dr Ayu mentioned that the law also stipulates important transitional justice mechanisms, including the handling of human rights issues. Transitional justice is a mechanism to resolve past human rights abuses through the judiciary and non-judiciary measures. These measures include criminal persecutions, reparation programs, institutional reforms, truth commissions, and institutional reforms.

Nevertheless, transitional justice mechanisms were barely applied in West Papua. The first component of transitional justice was the prosecution initiative. It failed due to conflicts of jurisdiction, as the law has no clear definition of whether Papua is referring to Papua province, West Papua province or both. The conflict over jurisdiction has in turn hampered criminal prosecution. The truth-seeking mechanism to assist post-conflict situation was done by Indonesia’s Human Rights Commission (KOMNAS HAM) over abuses during military operations. However, there were no follow-ups on this mechanism too.

Reparation, also one of the transitional justice mechanisms, was never implemented except in the form of provincial regulation. Instead of reforming the institution, the government decided to deploy 14,000-16,000 military personnel to the area.

In response to these failures, the international civil organization had set up the 1998 Biak Massacre Citizen’s Tribunal. This was regarded as one of the limited efforts to uphold transitional justice internationally.

With the continued failure of the transitional justice mechanism, Dr Ayu described West Papua as a state of total impunity. She added that the Indonesian government’s refusal to see their West Papuan counterparts as an equal is a significant impediment to the possibility of future peace dialogues. In addition, the agenda of holding an independence referendum would inadvertently be present in any form of peace dialogue with West Papua, which the Indonesian government will not accept.

Indonesia has great economic interest in West Papua, which is rich in natural resources. The Indonesian government had even signed a mining contract with an American corporation in 1967, two years before PEPERA (the referendum to join Indonesia).

Moving forward, Dr Ayu suggested several points to consider. First, to avoid further conflict, it is important to have an equal peace dialogue between the Papuans and the Indonesian government. She also mentioned that the government must follow up investigation on human rights violation. Last but not least, Dr Ayu proposed to evaluate transitional justice as part of the evaluation of the special autonomy law.

During the Q&A session, Dr Ayu responded to an array of questions, which included the internal colonialism, greed and grievances framework in the separatist conflict, lessons learned from Aceh, and the future of human rights in Indonesia, among others. 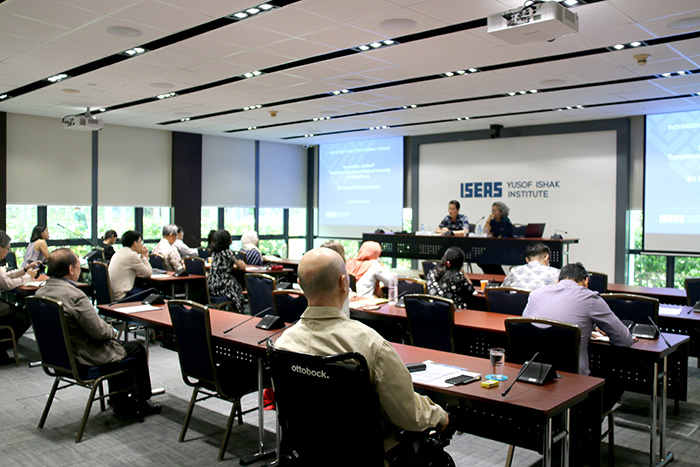 The audience engaged Dr Ayu on questions regarding internal colonialism and the future of human rights in Indonesia among other things. (Credit: ISEAS – Yusof Ishak Institute)