Mr. Chris Humphrey, Executive Director of the EU-ASEAN Business Council, presents on the perspective that European industry has towards Southeast Asia. He covers attitudes towards trade and investment in the region, viewpoints on the ASEAN Economic Community, and developments with various trade deals, as well as the EU-ASEAN relationship. 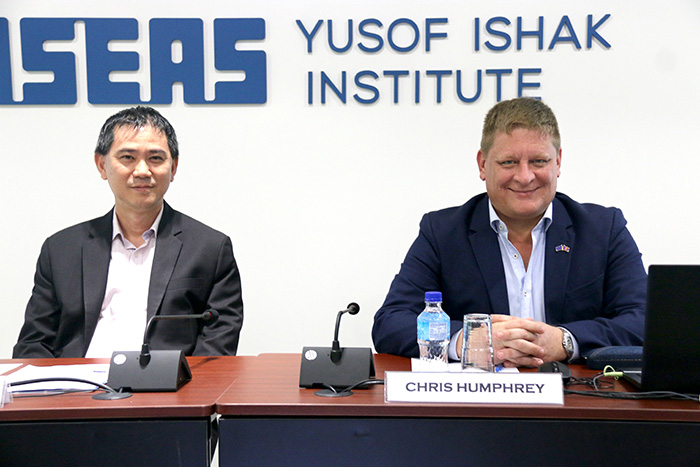 Mr. Humphrey opened by introducing the 2019 EU-ASEAN Business Sentiment Survey. Currently in its fifth edition, the EU-ABC’s annual flagship publication surveys the outlook of European businesses in the region and is used as a platform for dialogue and recommendations between both private and public sectors in the ASEAN region with the aim of moving the ASEAN Economic Community Blueprint forward.

The key findings from this year’s EU-ASEAN Business Sentiment Survey highlight that (i) European businesses are highly optimistic and committed to ASEAN; (ii) there is declining enthusiasm for the ASEAN Economic Community (AEC); and (iii) European businesses want greater progress on Free Trade Agreement (FTA) negotiations between the EU and ASEAN.

Elaborating further on the positive findings of the survey, Mr. Humphrey shared that the business environment and outlook for European firms in ASEAN remains favourable. 53% of respondents ranked ASEAN as the region with the best economic opportunity, almost double that of the next most popular region, China. Additionally, 88% of respondents also expect to increase trade and investment in ASEAN in the next five years, up from 75% in 2018. European businesses identified the diversification of customer base, stability of government and political systems, and adequate laws and regulations to encourage foreign investment as the top three factors driving their expansion plans in the region.

Worryingly, however, the survey findings point to growing uncertainty over the AEC’s implementation, with 46% of respondents unclear about the impact of the AEC on their businesses. There is an increasing perception that ASEAN economic integration is failing to deliver, with only 3% of respondents agreeing that the pace of ASEAN economic integration is fast enough, a significant drop from 11% in 2018. Despite various ASEAN-level commitments to eliminate non-tariff barriers (NTBs), only 15% of respondents found that the number of NTBs in ASEAN are decreasing. European businesses also believe that more work needs to be done to simplify customs procedures for intra-ASEAN movement of goods and to harmonise standards and regulations. Mr. Humphrey underscored that ASEAN risks being seen as merely a “sum of the parts” of its member states if integration efforts remain sluggish.

Next, the survey findings reveal that the majority of respondents (94%) think that the EU should accelerate negotiations for a region-to-region FTA with ASEAN, with 72% believing that a regional FTA is more advantageous than a series of bilateral FTAs. The main benefits of an EU-ASEAN FTA, according to respondents, are improving market access, harmonised rules and regulations, and easier use of EU-ASEAN supply chains. However, European businesses also recognise the complexity of negotiations given the divergent natures of ASEAN economies, and remain open to a less complicated deal than the EU’s current standard FTA.  After an EU-ASEAN FTA, European businesses rank trade deals with Malaysia and Thailand as the next best alternatives.

Mr. Humphrey highlighted the strong partnership between the EU and ASEAN, noting that the EU is ASEAN’s largest external source of FDI and its second largest trading partner. He also gave examples of EU-ASEAN development cooperation initiatives such as the ASEAN Regional Integration Support by the EU programme (ARISE Plus), the Enhanced Regional EU-ASEAN Dialogue Instrument (E-READI), and EU Support to Higher Education in ASEAN Region (EU SHARE). Other encouraging developments in EU-ASEAN relations include the EU-Singapore and EU-Vietnam FTAs as well as the ongoing EU-Indonesia Comprehensive Economic Partnership Agreement (CEPA) and Comprehensive Air Transport Agreement (CATA) negotiations. Although there remain concerns such as the palm oil issue and the suspended FTA negotiations with Thailand and the Philippines, Mr. Humphrey believed there were some positive changes to come under the new European Commission.

The seminar concluded with Mr. Humphrey engaging in a question and answer session, where he shared his views on compelling issues such as the US-China trade war and bright investment spots in ASEAN.