In this seminar, Mr Usman Hamid elaborates on the underlying factors and the broader impacts of the student protests that had occurred across Indonesia last September. He also reflects on Indonesia’s democracy after reformasi in 1998.

Wednesday, 6 November 2019 – The series of student protests that happened in several cities across Indonesia last September has raised the tension in the country’s domestic politics. It became an important momentum to reflect Indonesia’s democracy after reformasi in 1998. ISEAS hosted a seminar on “Defending Reformasi: Student Movements vs Oligarchy” and invited Mr Usman Hamid, Executive Director of Amnesty International Indonesia. The talk was moderated by Mr Made Supriatma, Visiting Fellow at ISEAS Indonesia Studies Programme. 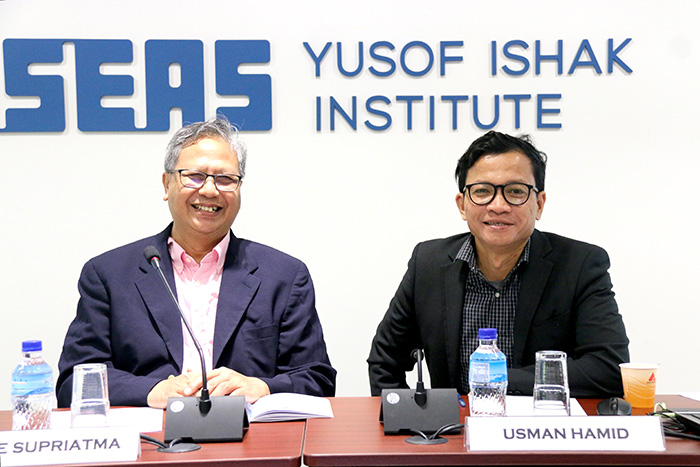 Mr Hamid began his presentation by posing some questions on the reflection of demonstrations, including its underlying factors and the broader impacts. He argues that the emergence of a new student movement in post-1998 liberal democratic reforms was first triggered by the weakening of the Corruption Eradication Commission (KPK), the most important symbol of reformasi, as reflected in the students’ seven major demands during the rallies. Yet, Mr Hamid said that the demonstrations were also a consequence of the accumulative dissatisfactions against the broken promises for reform, the absence of a real political opposition, and the degree to which a set of controversial bills could affect people’s daily life.

Mr Hamid then focused on President Joko Widodo’s promises on eradicating corruption and how KPK has been weakened. He showed the list of 15 attempts to undermine KPK, including the attack to KPK investigator, Novel Baswedan. Moreover, Mr Hamid argued that the revision of KPK law has in many ways systematically weakened KPK’s independence. He cited examples such as the establishment of Oversight Body as well as the conversion of KPK staff to become government officials. He stated that ‘the herd of crocodiles’ –that counts Widodo’s presidency, the parliament, and the police– have collectively jeopardized the independence of the Commission and undermined the fight against corruption. Therefore, Mr Hamid argued that the weakening of KPK has been a major trigger for the student protests.

Besides the anti-corruption issue, Mr Hamid added that the worsening of the human rights situation has also provoked public dissatisfaction. Unresolved past human rights abuses, racism against the Papuans, criminalization of activists, and the new criminal code, have concerned the critical civil society, including the students.

Amnesty International Indonesia noted that around 214 people have been criminalized for criticizing Jokowi and his administration. Mr Hamid saw this decline in freedom of expression was caused by an increasing role of the police and its excessive use of force in protecting the president and government institutions.

To conclude, Mr Hamid stated that the series of student protests should be seen as a national awakening to hold President Widodo and his administration accountable. The weakening of KPK as well as continuous violations against human rights, including killing, kidnapped, and arrest, are examples of Indonesia’s democratic setback. Nevertheless, the oligarch is getting more powerful and Mr Hamid suggested to keep an eye in the revision of the Criminal Code and many other legislative products. The attendees and the speaker discussed issues related to the role of police in Jokowi’s administration, amongst other topics. (Credit: ISEAS – Yusof Ishak Institute)

Drawing around 36 people in the audience, the Q&A session was quite dynamic. The attendees and the speaker discussed issues related to the role of police in Jokowi’s administration, Jokowi’s political capital to focus on economics and infrastructural projects, the issue of Papua, the prospects of the next elections, and the future of democracy in Indonesia.