A+ A-
Leo Suryadinata, who recently received a Cultural Award from Indonesia for this contribution to the study of Chinese Indonesians, shared his insight on Beijing’s new policy towards overseas Chinese and its implications on the ethnic Chinese in Indonesia, a democratic Muslim-majority country.
INDONESIA STUDIES PROGRAMME SEMINAR

Friday, 2 November 2018 – Leo Suryadinata, who recently received a Cultural Award from Indonesia for this contribution to the study of Chinese Indonesians, shared his insight on Beijing’s new policy towards overseas Chinese and its implications on the ethnic Chinese in Indonesia, a democratic Muslim-majority country. He first outlined comprehensively how China’s policy towards overseas Chinese have changed over several time periods, influenced by the development of China and the waves of migration beyond China. Since the Qing Dynasty until the Kuomintang period, China had abided a policy towards overseas Chinese which did not recognise dual citizenship. Chinese emigrants were viewed disapprovingly and attributed to cause tensions with Southeast Asian countries. Change began with the establishment of the republican government, which tackled dual citizenship by recognising the right to renounce Chinese nationality. This was featured in the 1955 Afro-African Conference (or the Bandung Declaration) which explicitly emphasized that overseas Chinese are essentially citizens of China. The stance towards overseas Chinese was reinforced with further emigration of Chinese during the Cultural Revolution and culminated into the inception of the 1980 Nationality Law by Deng Xiaoping which forms the current citizenship regime, enacting on a principle of single nationality. The advent of the open-door policy introduced by Deng Xiaoping and a new wave of Chinese migrants changed how China viewed overseas Chinese – they are now seen as social, economic and political capital. In doing so, the distinction between Huaqiao (foreign citizen with Chinese ethnicity) and Huaren (foreign citizen with Chinese descent) has also been blurred. Implications of the new policy on the relationship between China and specifically Chinese Indonesians have extended across various aspects including economic, humanitarian, sports, education and academia, culture and the press. However Suryadinata argued that the involvement of China in Indonesia is not necessarily effective nor well-received by the entire Chinese Indonesian population, apart from the older generation of Chinese-speaking businessmen who have vested interests and business links with China. He also questioned the rationale of China’s policy towards overseas Chinese, which had the potential of employing ethnic Chinese to promote and achieve China’s national interests. The question and answer after the seminar probed deeper into the relationship between China and Indonesia in the context of the policy of China on overseas Chinese and the heterogenous nature of the Chinese Indonesian population. In response to the latter, Suryadinata argued the reaction of Indonesian Chinese towards China’s policy falls within spectrum and was geographically contingent, hence requiring further comprehensive and critical analysis. 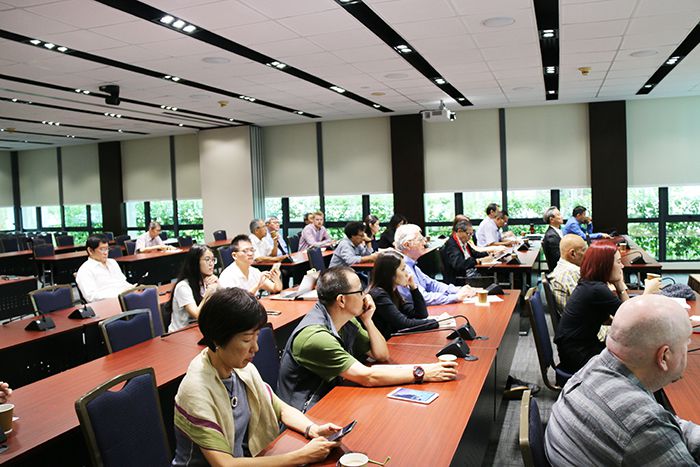 The audience during the presentation (Credit: ISEAS – Yusof Ishak Institute)