A+ A-
This seminar explored the different meanings of ‘law’ and ‘justice’ in theory and as understood by Malaysian Tamils, and deconstructing them, to allow a more thorough and meaningful understanding of how ideas of race and ethnicity are produced, imagine and negated within, for example, the Malaysian Constitution. Andrew Wilford concludes with a mediation upon the ethics of critique by suggesting the ethnographic betrayal is both painful and necessary.
Thursday, 02 June 2016 – ISEAS-Yusof Ishak Institute had the pleasure of having Professor Andrew Willford from Cornell University to speak on “Betrayal, Sacred Landscapes, and Stories of Justice among Tamils in Malaysia”. Professor Andrew Willford explaining the different meanings of ‘ law’ and ‘justice’ to the participants at the start of his seminar. Seated with him is Dr Benjamin Loh, ISEAS Fellow, who chaired the session. (Source: ISEAS – Yusof Ishak Institute)

Professor Willford talked about the different meanings of ‘law’ and ‘justice’ in theory and as understood by Malaysian Tamils, and deconstructing them, to allow a more thorough and meaningful understanding of how ideas of race and ethnicity are produced, imagined, and negated within, for example, the Malaysian Constitution. Professor Willford suggested that the Law has placed today’s Malaysian Tamils in a very awkward position, and the situation is compounded by the closure of many of the plantations on which they have worked on, but had legal relationship with, as well as the transformation of such land into settlements not for them but for the ethnic Malays. In recent years the Tamils have also not only been forced out of their homes but they have seen the wiping out of their history in such places through, for example, the destruction of their temples. 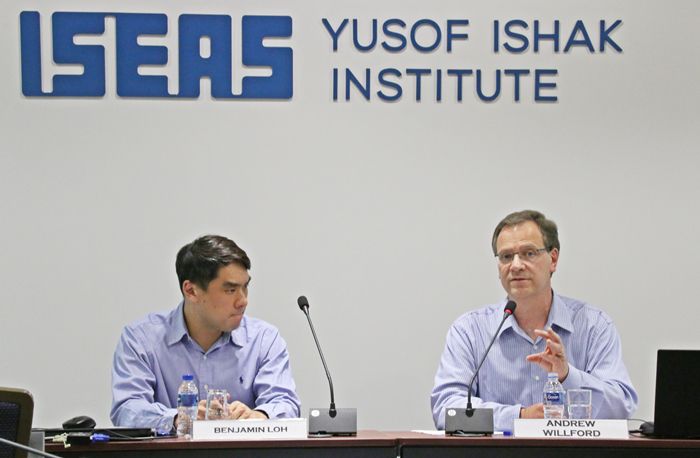 Professor Willford sharing his insights and drawing references from his recent publication, Tamils and the Haunting of Justice: History and Recognition in Malaysia’s Plantations. (Source: ISEAS – Yusof Ishak Institute)

The seminar was based on research from his most recent book, Tamils and the Haunting of Justice: History and Recognition in Malaysia’s Plantations (published simultaneously by University of Hawai’i Press and NUS Press in 2014), which examined how Tamil plantation communities dealt with the uncertainties of retrenchment and relocation in Malaysia. The book is a sequel to his earlier book Cage of Freedom: Tamil Identity and the Ethnic Fetish in Malaysia (University of Michigan Press, 2006) which focused on Tamil-Hindu religious revivalism in Malaysia’s state-driven ethnic and religious nationalism. According to Dr Benjamin Loh, the approach towards ethnicity and the plantation economy in Malaysia adopted by Professor Willford is thoroughly innovative and refreshing. (Source: ISEAS – Yusof Ishak Institute)

Dr Benjamin Loh, who chaired Professor Willford’s seminar, felt that it was thoroughly innovative and refreshing in how Professor Willford had approached ethnicity and the plantation economy in Malaysia. What was particularly insightful was how notions of justice as understood and imagined by the Malaysian Tamils actually complicate the neat legal demarcations of ethnic difference. And in doing so, Professor Willford demonstrated to the audience that law and justice were actually quite at odds with each other through the vehicle of religion. 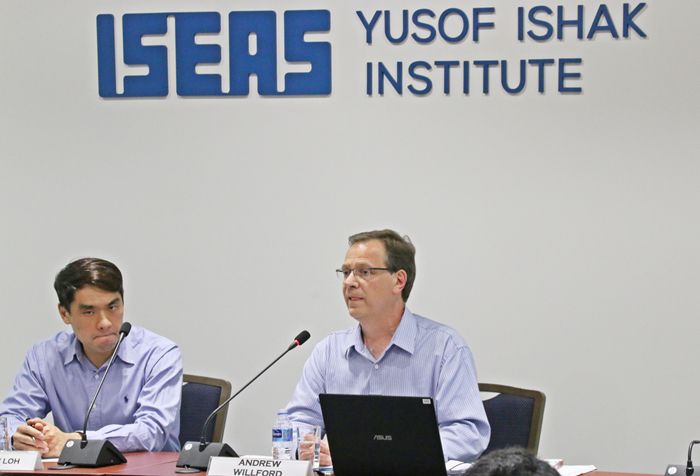 Professor Willford concluded the seminar by exploring a case study of the destruction of the Ebor Estate temples in Shah Alam, Malaysia. The fire and demolitions of the Ebor Estate temples had caused shock and disbelief among the devotees of the Tamil community. The disbelief, however, also propelled renewed faith and Professor Willford described how the Tamil community revitalized and politicized efforts toward a reconstitution of the sacred ground. Tamil notions of divine justice were forged and became a form of psychological compensation, albeit one grounded in a growing victim’s narrative.