A+ A-
The latest in the Nalanda-Sriwijaya Lecture Series was Dr Sarah Tiffin’s seminar entitled “Banks, Raffles and the Poison Tree of Java: Botanical Exchange in the Late Eighteenth and Early Nineteenth Centuries”. Dr Tiffin, an independent Australian-based scholar, spoke of the roles of Sir Joseph Banks and Sir Stamford Raffles in encouraging botanical investigations of the upas (or poison tree) of Java, within the context of the British Empire’s global botanical network.
NALANDA–SRIWIJAYA CENTRE LECTURE SERIES

11 December 2018  — The latest in the Nalanda-Sriwijaya Lecture Series was Dr Sarah Tiffin’s seminar entitled “Banks, Raffles and the Poison Tree of Java: Botanical Exchange in the Late Eighteenth and Early Nineteenth Centuries”. Dr Tiffin, an independent Australian-based scholar, spoke of the roles of Sir Joseph Banks and Sir Stamford Raffles in encouraging botanical investigations of the upas (or poison tree) of Java, within the context of the British Empire’s global botanical network. These investigations, Dr Tiffin argued, were a response to the widespread grotesque imaginations of the upas, such as its use as a metaphor for impropriety and immorality in British literature. The seminar drew more than 30 participants, including museum and public service staff, as well as members of think tanks, tertiary institutions, and the public. 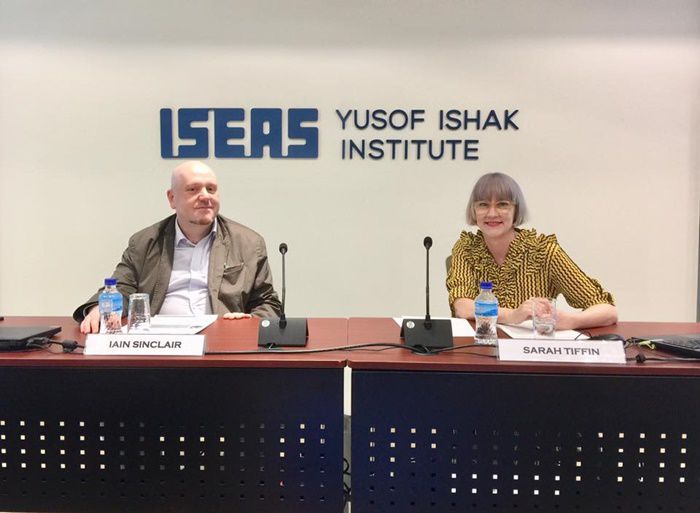 Dr Tiffin attributed the British imaginations of ghastly upas tree to J. N. Forsch’s 1783 sensational article in the London Magazine. In it, Forsch claimed to have witnessed firsthand the noxious and lethal nature of the tree. However fabulous his narrative was, his reputation as a surgeon in Java assured that his article was widely seen as the most factual account of the upas at the time. The upas rose to infamy after Forsch’s article was reproduced in full as an explanatory note in a popular poem by an eminent physician, Erasmus Darwin. Despite being wholly unconvinced by the narrative, Darwin could not pass on the opportunity to hitch his wagon to the article’s fame. However, given Darwin’s reputation and serious intent to educate readers about botany through poems, the inclusion of Forsch’s article was heavily criticised for lending credibility to the unscientific narrative.

Dr Tiffin noted that the notoriety of Forsch’s article resulted in efforts by celebrated botanists such as Banks to ascertain the true nature of the upas through scientific investigations. Given his influence in the British botanical circle, Banks actively encouraged these investigations and was constantly updated with botanical discoveries throughout the empire. Doing this was especially necessary for Banks so as to restore the integrity of the botanical network, which was briefly threatened when Forsch’s article was published shortly after Banks admitted Forsch into his circle. As for Raffles’ contribution in the investigations of the upas, Dr Tiffin remarked that it opened up opportunities for him to establish connection with Banks, which would improve his reputation as both a naturalist and an enlightened administrator. Raffles commissioned Thomas Horsfield, an American scientist based in Java, and instructed him to prioritise the scientific investigations on the upas. The prioritisation was a response to the advice from William Marsden, a Sumatra-based British personnel, who was aware of Britain’s growing interest in the recently published French papers that described the upas in scientific terms. Horsfield’s papers on the upas and other materials that Raffles sent to Britain caught Banks’ attention, kickstarting Raffles’ connection with Banks. With this connection, Raffles’ active promotion of the Southeast Asia’s economic potential laid the groundwork for the eventual acceptance of a more long-lasting British presence in Singapore.

Dr Tiffin highlighted several important points in the Q&A session that followed. Firstly, she explained that Raffles intended to further dispel the myths surrounding the tree and Java by mentioning the upas briefly in his book, “History of Java”. Secondly, misconception of the upas had persisted since the 14th century among British audiences, as several reports mentioned telltales of incredible ideas about Javanese people and the upas. Lastly, she found that the latest use of the upas as a metaphor was in a document on the city development of Glasgow in the 1980s, where the upas represented the negative qualities surrounding the rich urban development.