This seminar discusses the major economic and trade trends in the APEC region.

Monday, 17 June 2019 – ISEAS – Yusof Ishak Institute held a seminar to discuss major economic and trade trends in the APEC region. Dr Siwage Dharma Negara, Coordinator of APEC study centre at ISEAS – Yusof Ishak Institute, first gave an overview of the seminar. He said that growing US tensions with China has translated to tit for tat tariffs and growing uncertainties in the region. As a result, sustaining regional growth is more difficult, and the task is further compounded due to the need to ensure inclusive growth in the region.

The first speaker was Dr Denis Hew, current director of APEC Policy Support Unit (PSU). He first examined the evolution of APEC since it was established. He then spoke of ways to sustain APEC growth, beginning with the trend analysis report, and highlighting that there has been uneven growth for APEC as the region grapples with a challenging global environment. From left to right: Dr Denis Hew, current director of APEC Policy Support Unit (PSU), examines the evolution of APEC since it was established; Dr Siwage Dharma Negara, moderator for this seminar; and Mr Benjamin Tan, Senior Assistant Director at the Trade of the Ministry of Trade and Industry. (Credit: ISEAS – Yusof Ishak Institute)

He elaborated on the economic history of APEC and the first 7 initiatives established by APEC. Though some may think that the initial issues discussed by APEC is no longer relevant, he holds the view that many issues are still quite prominent in today’s context. There has been a tremendous expansion of APEC over the past 30 years, and this has brought about its fair share of benefits and costs: he briefly commented on the current challenges APEC is facing, such as the doubling of the environmental footprint in the past two decades.

Apart from the commentary on APEC, Dr Hew also analysed the changes in the region over the past two decades. He highlighted the salient income inequality in the region and asserted that the top 5% are getting a lot richer than the bottom 5%, which has in turn given rise to a lot of anti-globalisation sentiments. He opined that for APEC to successfully mediate the situation, they need to better communicate benefits of trade and cooperation. There are also the rising concerns of the middle income trap and low regional growth, and this would require working on structural and economic reforms to sufficiently address these issues.

Dr Hew concluded by saying that the utilisation of new technology has changed the way people do things, and countries have to set aside national interests for cooperation and be innovative as the region moves forward in the next 30 years.

Following Dr Hew, Mr Benjamin Tan, Senior Assistant Director at the Trade Division of the Ministry of Trade and Industry (MTI), shared his key takeaways from the 25th APEC ministers meeting in Viña del Mar, Chile. He compared the outlook of Chile and Singapore and expressed his view that Chile is aligned with Singapore in terms of bringing about more free trade in the region. He elaborated on the theme and priorities of Chile. The first priority is the transition to digital society, the second priority is the integration of networks regarding trade facilitation, global value chains and the promotion of authorised economic operators. The third priority involves inclusive growth especially for women and SMEs, and the last priority revolves around the aim for sustainable growth.

Lastly, he talked about the challenges APEC may face, such as sensitive digital issues with regards to data flow and data location. Looking forward, he said that there is no certainty as to how the region will grow, but he still believed that there will be a fair share of both benefits and problems with this growth.

Following the presentations, there are many questions from the attendees. Some enquired about the countries that will benefit more from trade war between China and US, the countries that will lose out, and the policies needed to cushion the impacts. Pertaining to this question, Dr Hew responded that there are some beneficiaries but that will only in the short term. There will inevitably be trade contraction in the long run, resulting in a lose-lose situation for everyone. 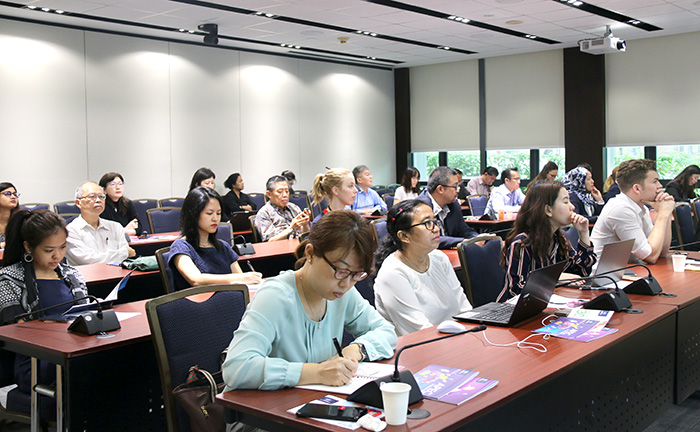 The audience asked questions on an array of topics including the trade war between China and US, digital society shifts and cyber security, during the Q&A. (Credit: ISEAS – Yusof Ishak Institute)

Other questions revolved around the digital society shift and concerns with cyber security, to which the presenter replied that this is a difficult issue, and changes in the global economy happens rapidly. Structural reforms are undertaken through the economic committee, and there is no one size fits all method. Countries lagging behind can look at successful strategies undertaken by the countries moving ahead, and devise suitable ways to implement these strategies in their home countries.