Following the introductory remarks by Dr Lee Poh Onn, Senior Fellow at ISEAS, Ms Hernando began her presentation by talking about the uneven but continued economic growth that took place in the APEC region in the past year. She added that this mixed growth could be attributed to uncertainties arising out of: global trade tensions; pressures on interest rates and exchange rates; and rising oil prices. With domestic consumption as the most stable contributor, the region expanded by 4.1 per cent in 2018, but growth is projected to moderate in 2019‒2020, although still outpacing the rest of the world. The ARTA report also revealed that international trade is no longer the most reliable driver of APEC economic growth it once was. Since its establishment in 1989, there have only been two years when APEC trade growth was lower than GDP growth (2001 and 2009). However, from 2012 to 2016, trade growth has been lagging behind GDP growth. In 2017, APEC trade outpaced GDP growth, with a projected convergence in 2018-2019. This suggests that other measures might be needed to ensure that growth is balanced, sustainable, and inclusive. Boosting domestic consumption, supporting the growing middle class and improving the efficiency of the services sector are relevant examples of immediate next steps. Drawing the audience’s attention to the concept of ‘Digital Productivity Paradox’, Mr Andres emphasised the region’s need to work towards technological advancements for enhancing labour productivity. Some of the hurdles in this area include: outdated economic structures and indicators; constraints to entrepreneurship and innovation; structural unemployment; and policy uncertainty. Addressing these challenges is imperative for the APEC region to reap the benefits of Industry 4.0, he concluded. 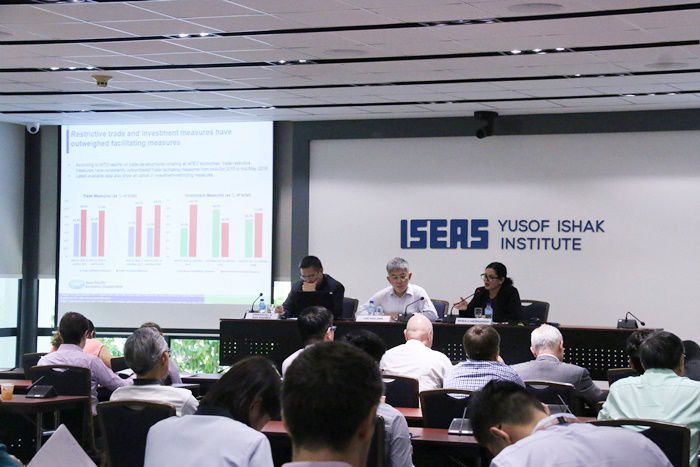 The seminar was 60 minutes long, and was attended by an audience of 45 people, including research scholars, students, and the public.