A+ A-
This seminar discussed APEC along with more focused insights on the economic outlook of the Southeast Asian Region, which is expected to grow at a rate that is below world GDP growth in 2016-2017. Following Asia-Pacific Economic Cooperation (APEC)’s conclusion of its Second Senior Officials Meeting in Peru in the first two weeks of May, Dr Bollard provided a snapshot on key issues discussed. This include: reviewing the progress of the Bogor goals; reviewing bottle necks in the global supply chain; structural reform in the economy; supporting micro, small and medium-sized enterprises; trade in services and regional economic integration. As the host for this year’s APEC meetings, Peru will focus on continuity in agenda set by the Philippines, who hosted meetings in 2015. The Free Trade Area of the Asia-Pacific (FTAAP) strategic studies was undertaken by APEC economies in the past year and has been collated by the APEC Policy Support Unit (PSU). As the study is a long term commitment, it will take some time to formulate concrete recommendations. Dr Hew sharing with the audience that APEC’s GDP growth for 2016-2018 comparing to the world average would be lower. (Source: ISEAS – Yusof Ishak Institute)

Dr Hew updated the audience with APEC’s economic outlook. The economic bloc remains resilient amidst global economic challenges. Among the factors, private and government consumption have been important in keeping economic growth rates, aided by low inflation in many countries. Trade performance is affected by cyclical and structural factors such as: a slowdown in global demand; the sizable decline in commodity prices and the shortening of global value chains. He thought that APEC’s 2016-18 GDP growth would be lower than the world average, which means that APEC economies have to deal with downside risks. 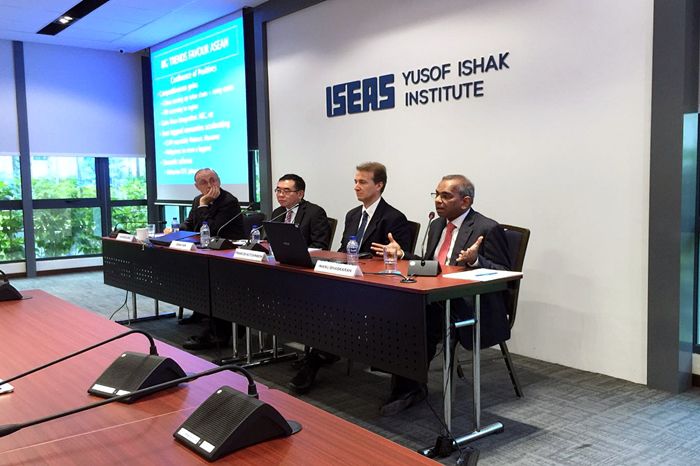 Mr Bhaskaran explaining to the audience that exports are still driven by the G3 countries although China has a large impact on Southeast Asian economies. (Source: ISEAS – Yusof Ishak Institute)

Mr Bhaskaran gave a detailed outlook for the G3 countries and key economies in Southeast Asia. The easing of loan standards in Europe is an important turning point in the region, indicating possible positive sentiments. An important unanswered question for Southeast Asia is when will capital spending in the G3 rise? Although China has a large impact in Southeast Asian economies, exports are still driven by the G3 countries. China’s excess supply has a deflationary impact to other countries, as it invests excess capacity in other countries.

Dr Hutchinson, who chaired the seminar, thanked the panellists for the interesting discussion.