In this seminar, Mr Daljit Singh provides an overview of the United States’ hardening stance against China and the implications for Southeast Asia.

Thursday, 18 July 2019­ — An audience of around 90 diplomats, researchers, journalists, and members of the public attended the seminar on American foreign policy delivered by Mr Daljit Singh, a Senior Fellow at the ISEAS – Yusof Ishak Institute. Drawn from his interviews with 17 think tank scholars and former officials in Washington D.C., Mr Singh provided an overview of the United States’ hardening stance against China and the implications for Southeast Asia. 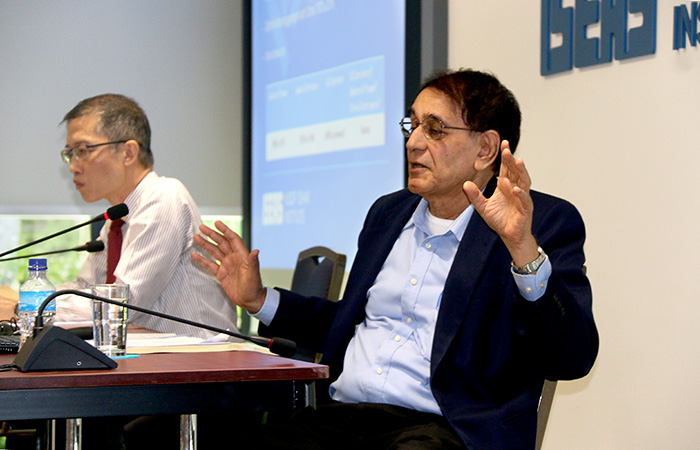 Mr Singh explained that the hardening of US attitudes towards China predates the Trump Administration, but it became official policy only under Trump. Under the Trump Administration, there exists an unprecedented and “remarkable whole of government anti-China stance”. There is a growing belief that China seeks to oust the US from Asia and become the pre-eminent global power. Concerns about China extend to its technological advances as well as the feeling that China has infiltrated the whole US system through spies, agents of influence, cyber-espionage, influence operations, and so on. Moreover, the anti-China sentiment has broad bipartisan support in the United States and is likely to continue well beyond the Trump administration.

However, there is a good deal of uncertainty about policy. This is not only due to President Trump’s capriciousness and unpredictability, but also the fact that it will take time for a coherent policy to emerge because the US is making a major turn in China policy after half a century of engagement, and many adjustments first need to be made.

Mr Singh noted that Southeast Asia has received less attention under the Trump Administration compared to the Obama Administration,  partly due to US frustrations about ASEAN’s “lack of coherence and inability to deliver” and Trump’s general dislike of multilateral arrangements. Still, the US recognises the greater strategic and economic importance of this region in the context of the intensified rivalry with China. However, it remains to be seen how much resources the United States would be willing to invest in Southeast Asia to compete with China. Mr Singh opined that since the United States is unable to match Chinese investment dollar to dollar, it is more likely to focus on “smart investments” that can burnish its standing in the region. He also shared that the United States will be embarking on more public diplomacy in the region.

In the ensuing discussion, Mr Singh responded to a number of questions from the floor ranging from how to get the US to pay more attention to ASEAN, to whether the US was looking for a new military base in Southeast Asia.