The seminar attempted to demonstrate, through textual and discourse analysis, that Teo’s poems, although falling into oblivion during Malaya’ s era of decolonisation, constituted a significant part of the post-war Malayan poetry – Click on to learn more about the seminar. 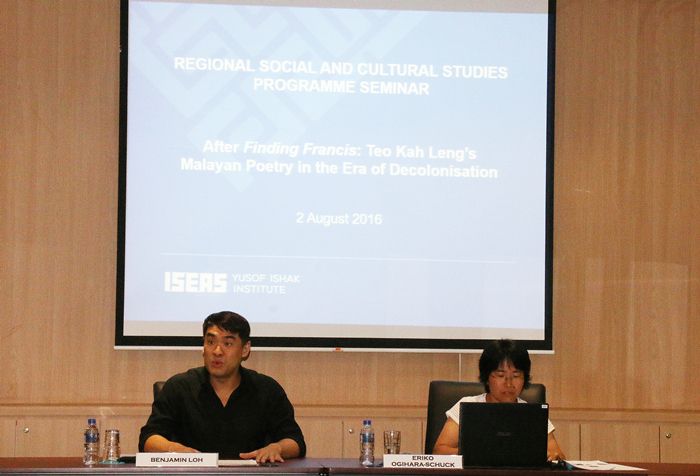 Tuesday, 2 August 2016 – ISEAS – Yusof Ishak Institute had the pleasure of having Dr Eriko Ogihara-Schuck to speak on “After Finding Francis: Teo Kah Leng’s Malayan Poetry in the Era of Decolonisation”.

Dr Ogihara-Schuck is ISEAS visiting fellow as well as a lecturer in American Studies at the Technical University of Dortmund in Germany. She is the author of Miyazaki’s Animism Abroad: The Reception of Japanese Religious Themes by American and German Audiences (McFarland, 2014) as well as the co-editor of Finding Francis: A Poetic Adventure that was published by Ethos Books in 2015. 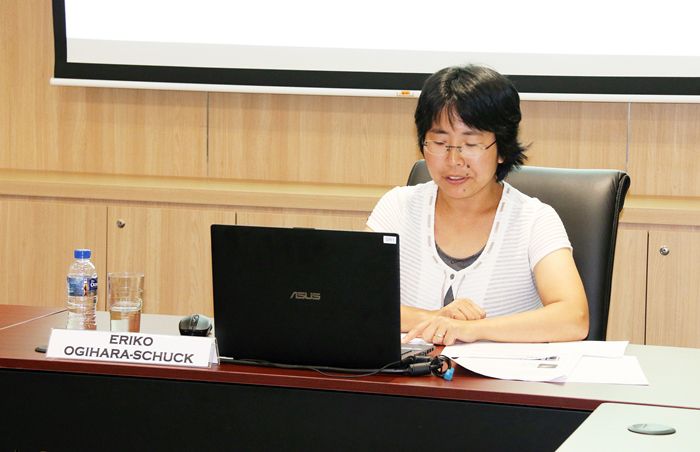 Dr Ogihara-Schuck, sharing with the audience that during the course of her search, it was discovered that Francis Ng was actually Teo Poh Leng who wrote poetry throughout the 1930s (Source: ISEAS – Yusof Ishak Institute)

Dr Ogihara-Schunk began the seminar by talking about Finding Francis which describes her efforts in locating a person called Francis Ng who wrote a poem in 1937 called “F.M.S.R.” (short for “Federated Malay States Railways”). This poem about a train journey from Singapore to Kuala Lumpur was claimed to be the first published book-length English poem by a Singapore author. During the course of her search, she discovered that this Francis Ng was actually Teo Poh Leng who wrote poetry throughout the 1930s until he fell victim to Sook Ching.

Teo Poh Leng’s brother, Teo Kah Leng — a former principal of the primary section of Montfort School in Serangoon—survived the Japanese Occupation and wrote poetry actively in the 1950s and 60s as Malaya moved towards independence. However, Dr Ogihara-Schunk argued that Teo Kah Leng’s poetry was marginalised as his works represented the type of post-war Malayan poetry that was produced outside the more established circles at the University of Malaya. In particular, she argued that the University’s poetry community felt that poems like Teo’s were too conventional and preferred to emphasise free verse. Teo’s poems—more accessible in style and subject matter—gained a wide audience, instead, through his school’s annual and Young Malayans, a magazine for Malaya’s English-medium school teachers and pupils throughout the 1950s and 60s. Through textual and discourse analysis, Dr Ogihara-Schunk argued that Teo’s poems, although falling into obscurity during Malaya’s era of decolonisation, constituted an important part of post-war Malayan poetry. During the seminar, she read and commented on Teo Kah Leng’s “I Found A Bone” which is included in Finding Francis, along with Teo Poh Leng’s “F.M.S.R.” along with other works by the two brothers.

Dr Ogihara-Schunk is currently looking into the cultural relations between Singapore and the United States from the nineteenth century to the present.