17 April 2019, Wednesday – Ancient written records have played an important role in our understanding of Southeast Asia’s past. For about a thousand years, volumes of Chinese travel notes and nautical charts accumulated as a result of maritime trade and expeditions have become a rich resource for researchers. These rare documents often provided clues to political interactions, the flow of commodities, and other socio-cultural links between China and Southeast Asia.

Archaeologists working on particular historical periods look to these written records in addition to studying recovered artefacts to obtain more information or to reinforce dating of a site. In his latest research presented at a Nalanda–Sriwijaya Centre (NSC) seminar at ISEAS – Yusof Ishak Institute on 17 April, Visiting Fellow Dr Tai Yew Seng, an archaeologist and specialist in Chinese ceramics proposed a new archaeological dating method using magnetic declination data extracted from historical sources. He added that this method could be particularly useful for a purposefully oriented structure or when the site yielded no datable artefacts. For example, while excavating at an ancient Islamic mosque site in a coastal area in Malindi, Kenya, east Africa, Dr Tai discovered that the mosque built atop an earlier one had a 10 degree difference in compass alignment. This variation was considered substantial because it would have affected the Kiblat – the direction of Mecca during Muslim prayer. Dr Tai realized that the revised orientation was due to constant magnetic changes in the Earth’s core, which caused the North Magnetic Pole to move over time. If reliable sources of past magnetic declination can be obtained from navigational documents, it is possible to obtain a probable dating of when the mosque was rebuilt.

To demonstrate this, Dr Tai’s research stemmed from the Ming Dynasty (1368 to 1644) Mao K’un map as a starting point, a Qing Dynasty (1644 to 1911) rutter, the General Compass Bearing (指南正法), as the cutoff point. The date range is from 1400 to 1650. Also, by investigating the dates of Cheng Ho’s overseas missions, Dr Tai attempted to determine the dates when compass bearings were taken. This was done via Ming historical records. But studying these texts could be a complex affair for many researchers as the manner in which information was recorded in the past was at times ambiguous, and inconsistent. By broadening his analysis into temple stele inscriptions by Cheng Ho, Dr Tai was able to obtain at least two reliable date sources for compass bearings between Kun Lun island (a well-known navigational landmark off the southern coast of Vietnam), and Chi Kan (south coast of Vietnamese). This information was used for comparative plotting. From 1433 to 1649, the bearing from Kun Lun island to Chi Kan changed from 22.5 degrees to 45 degrees. A shifting pattern of the North Magnetic Pole could be derived. This meant a specific formula could be applied to date other sources with compass bearings from Kun Lun island to Chi Kan, which falls within 22.5 degrees, and 45 degrees. This example clearly demonstrated an alternative method for dating sites, or in some cases, even providing a more detailed result than C-14 analysis. According to Dr Tai’s presentation, much information can be obtained by detailed studies of ancient navigational records. 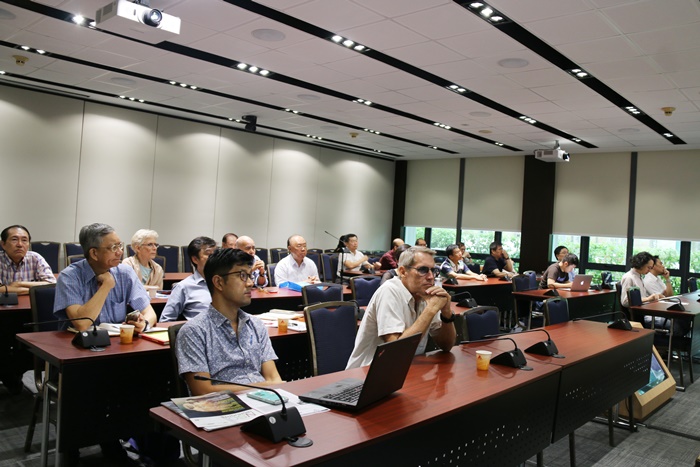 The audience was made up of members of the public, along with representatives from ministries and universities (Credit: ISEAS – Yusof Ishak Institute)

At the end of his presentation, Dr Tai invited the collaboration of other researchers in the creation of a scientific software, which could operate on an algorithm to chart the historical course of the Magnetic North Pole. He clarified during the Q&A session that this undertaking will require vast amounts of archival research of both Chinese and European navigational records, and the collaboration of geologists, and computer programmers. The success of this project would add another useful tool to the arsenal of archaeologists.