A+ A-
Professor Emmanuelle Sinardet (Paris Nanterre University) presented the first seminar of the year, with a paper titled “Reflections on the Spanish Conquest and its Representation in the Philippines: El Pacto de Sangre (1886, The Blood Compact) by Juan Luna (1857-1899)”.
REGIONAL SOCIAL AND CULTURAL STUDIES PROGRAMME SEMINAR

Professor Emmanuelle Sinardet (Paris Nanterre University) presented the first seminar of the year, with a paper titled “Reflections on the Spanish Conquest and its Representation in the Philippines: El Pacto de Sangre (1886, The Blood Compact) by Juan Luna (1857-1899)”. The seminar was attended by more than thirty participants from universities, museums, embassies, other cultural institutions, and members of the general public. Prof Emmanuelle Sinardet giving a seminar for The Politics of Art in Southeast Asia Seminar Series on “Reflections on the Spanish Conquest and its Representation in the Philippines: El Pacto de Sangre (1886, The Blood Compact) by Juan Luna (1857-1899)” (Source: ISEAS-Yusof Ishak Institute)

Prof Sinardet started by situating The Blood Compact within the socio-political context at the time. It was made in the late 19th century by Filipino painter Juan Luna, considered today as a national hero. She described the two polarizing narratives of the Spanish Conquest (Conquista) – the central phenomenon narrated in the painting: on the one hand, the Black Legend (Leyenda Negra) that demonises Spanish Conquistadors and on the other, the Golden Legend that idealises the Conquista. Different artistic representations were symbolic of this dichotomy and were often convenient political tools to legitimise or illegitimise the Spanish colonial presence. Prof Sinardet revealed how by using themes of barbarism and civilisation, the representations would depict the Conquistadors as either barbaric for destroying an already civilised native society, or noble for benevolently taming the barbaric natives.

Against that context, Prof Sinardet located the painting as the opposite of Black Legend, although not quite like the Golden Legend. Using elaborate composition and colours that focus audience’s attention to the two central figures (Spanish Conquistador Miguel Lopez de Legazpi and Datu Sikatuna de Bohol), Luna intends to highlight the intimate and equal relationship between the two as they solemnly raise their glasses filled with blood following the native ritual of sandugo. Depicted without his helmet on and partaking in sandugo, Legazpi is portrayed as being tactful and submitting to the local culture; whereas Sikatuna is depicted with elaborate armour, imposing posture, muscular arms with tattoos, signifying the presence of a brilliant pre-Hispanic Bohol civilisation. According to Prof Sinardet, The Blood Compact hence symbolises the shared destiny between Spain and the Philippines as equal allies of the same social status, meanwhile erasing the reality of the violence of Spanish Conquista and racial prejudices against the natives. 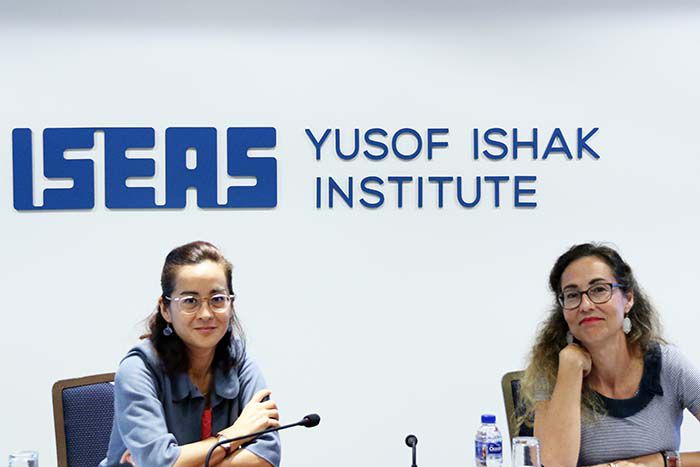 Unfolding the political significance of The Blood Compact, Prof Sinardet described Luna’s involvement in the Propaganda Movement – a growing Filipino national consciousness movement – during his art education in Europe. Understanding his political opinion and the fact that The Blood Compact was completed in Europe, it is clear that he wished to communicate to the European audience the promise that Spain made in the sandugo ritual for an equal partnership with the Philippines, hoping for public opinion to pressure Spain to fulfil the promise.

She concluded that The Blood Compact should rather be seen as a pictorial expression of the Propaganda Movement that fought for legal equality between Spaniards and Filipinos, instead of a representation promoting independence. This position was understandable given that the Movement was formed by Western-educated Filipino scholars in Europe, such as Jose Rizal and Luna himself, who had adopted Spanish values and remained faithful to the Spanish metropole. Today, The Blood Compact persists as a popular representation of Conquista in the Philippines, so much so that it hangs proudly at the Malacañang Palace in Manila and was reproduced into a statue by Napoleon Abueva, a Filipino sculptor, in the 1990s. 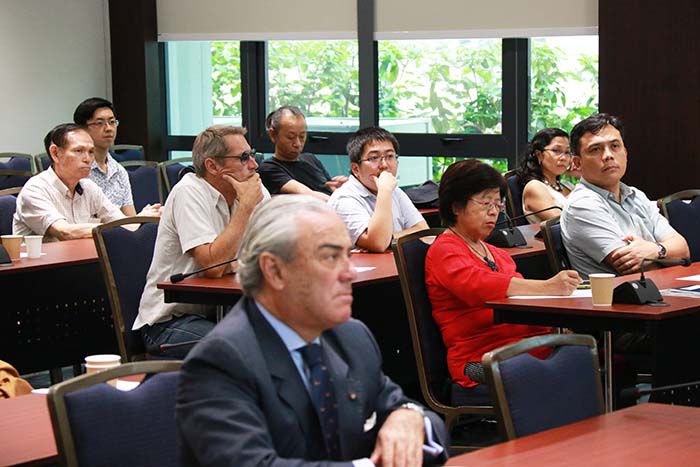 Members of the audience listening intently to the presentation (Source: ISEAS-Yusof Ishak Institute)

Questions from the audience allowed the speaker to emphasise that artistic depictions of the Conquista are merely historical representations that simplify the complex reality of the phenomenon. The questions also allowed her to clarify that the government’s move to consider Luna as a national hero was political, and does not represent many academics’ viewpoints. She also clarified that the Propaganda Movement was intended to fight for more autonomy of the Philippines as part of the Spanish empire. Hence, she described the painting as taking a “proto”-nationalistic position, where it refers to the initial stage of development of national consciousness before the birth of nationalistic movements for independence.