A+ A-
Prof. Elizabeth Moore (Associate Fellow, NSC, and In-Region Liaison for the SOAS Southeast Asian Art Academic Program, University of London) gave a talk entitled “The Localisation of Buddhism in the Wider Landscape of Bagan.” at the ISEAS – Yusof Ishak Institute.
NALANDA-SRIWIJAYA CENTRE LECTURE SERIES

Tuesday, 30 October 2018 – Prof. Elizabeth Moore (Associate Fellow, NSC, and In-Region Liaison for the SOAS Southeast Asian Art Academic Program, University of London) gave a talk entitled “The Localisation of Buddhism in the Wider Landscape of Bagan.” She discussed her research to document the spread of art historical, inscriptional, and archaeological data on the heritage of Bagan outside the capital. Prof. Moore has used five criteria —inscriptions, walls, temples, images, and water features – to assemble a region-specific inventory organized by river valleys that forms the core of her in-progress book.  The main concentration of the inventory is in six valleys located in the central part of the country.  The most consistent criteria were temples and monasteries, reflecting the centrality of Buddhism  in the social life of villages to this day. Inscription stones of the Bagan period, some still in situ, record donation of temple lands, people and goods to these places.  Many of these document renovations, repairs, and land donations to an existing place rather than imposition of a new court-led religious structure and supporting lands. Thus while the focus of her study is the 11th to 13th century CE, the pre-Bagan land organization and material culture is relevant for understanding the ongoing processes of integration. 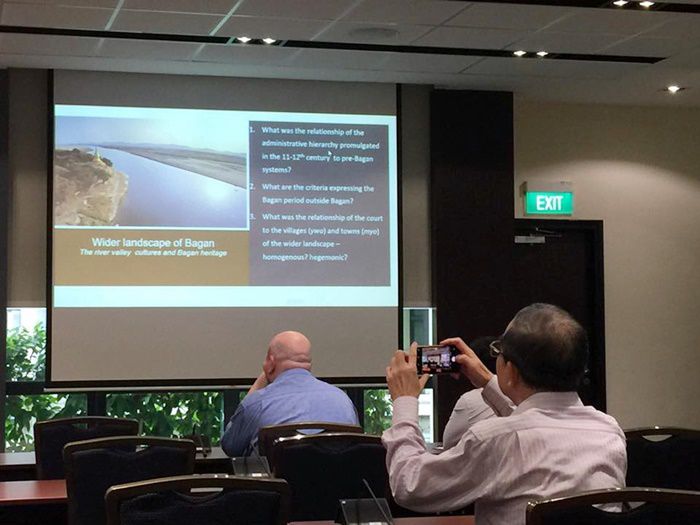 In matching texts to the on-the-ground evidence,  ancient walls, generally brick and earthen, were proving to be the most ambiguous. Some can be  linked to terms found in inscriptions, others to chronicle accounts, and in some river valleys, to pre-Bagan systems transmitted by oral tradition (pasat yazawin). The most well-known walls are the 11th century ‘forts’ built to purportedly protect the Bagan empire from mixture with various Shan kingdoms to the east. Shan chronicles, however, record several of the sites as occupied by Shan Sawbwas.  These and other records of the interchange with Shan groups during the Bagan period, profile a far more permeable and negotiated borderland than is suggested by the north-south line of structures along the edge of the Shan Plateau. (See also ‘Buddhism on the Shan Plateau: Bawrithat and Intein’, NSC Highlights No.9). In addition, while the wider landscape of Bagan inventory includes walls linked to the epigraphic and chronicle records, many elements  do not fit the texts. The majority of the temples have retained tangible and intangible links to Bagan heritage in connecting their present identity to the monks and kings of Bagan. She concluded by suggesting that while the court may have been the preferred partner for its economic stimulus and religious stature, that the success of the Bagan empire did not lie in its hegemonic rule but in the continual negotiations with a fluctuating series of river valley cultures. 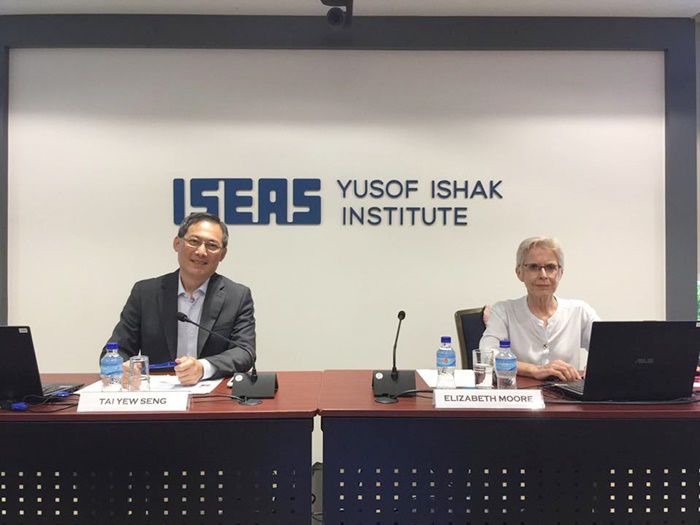 Chaired by Dr. Tai Yew Seng (Visiting Fellow, ISEAS – Yusof Ishak Institute), the 60 min lecture was attended by an audience of 26 people, including scholars, students, and members of the public.  The 30 min Q&A session included questions on the antiquity lacquer at Bagan, intra-regional languages and dialects, relationships with the Mongol Yuan dynasty at the end of the 13th century CE and comparable models of empire. The seminar ended with discussion of the relationship between the wider landscape of Bagan and the nomination dossier for Bagan currently under consideration by the UNESCO World Heritage Committee.