Tuesday, 30 January 2018 – Dr Lesley S Pullen, Post-Doctoral Research Associate in Art History at SOAS University of London, delivered the year’s first NSC lecture at ISEAS titled, “Classical Javanese Figurative Sculpture: Examining ornament and style”. The lecture examined a corpus of free-standing Hindu-Buddhist statues made in Java from the 9th to 14th centuries in detail, particularly the textile patterns in their elaborate dress, to highlight the interactions between foreign influences and local techniques. Dr Pullen received her PhD in Asian Art from SOAS in 2017 and is researching how the textiles and ornament of India, Central Asia, and China are reflected in Southeast Asian material art. More than forty-eight participants from local and foreign universities, tertiary institutions, non-profit societies, museums, publishing houses, private consulting/investment firms, research institutes, and the public attended this lecture. 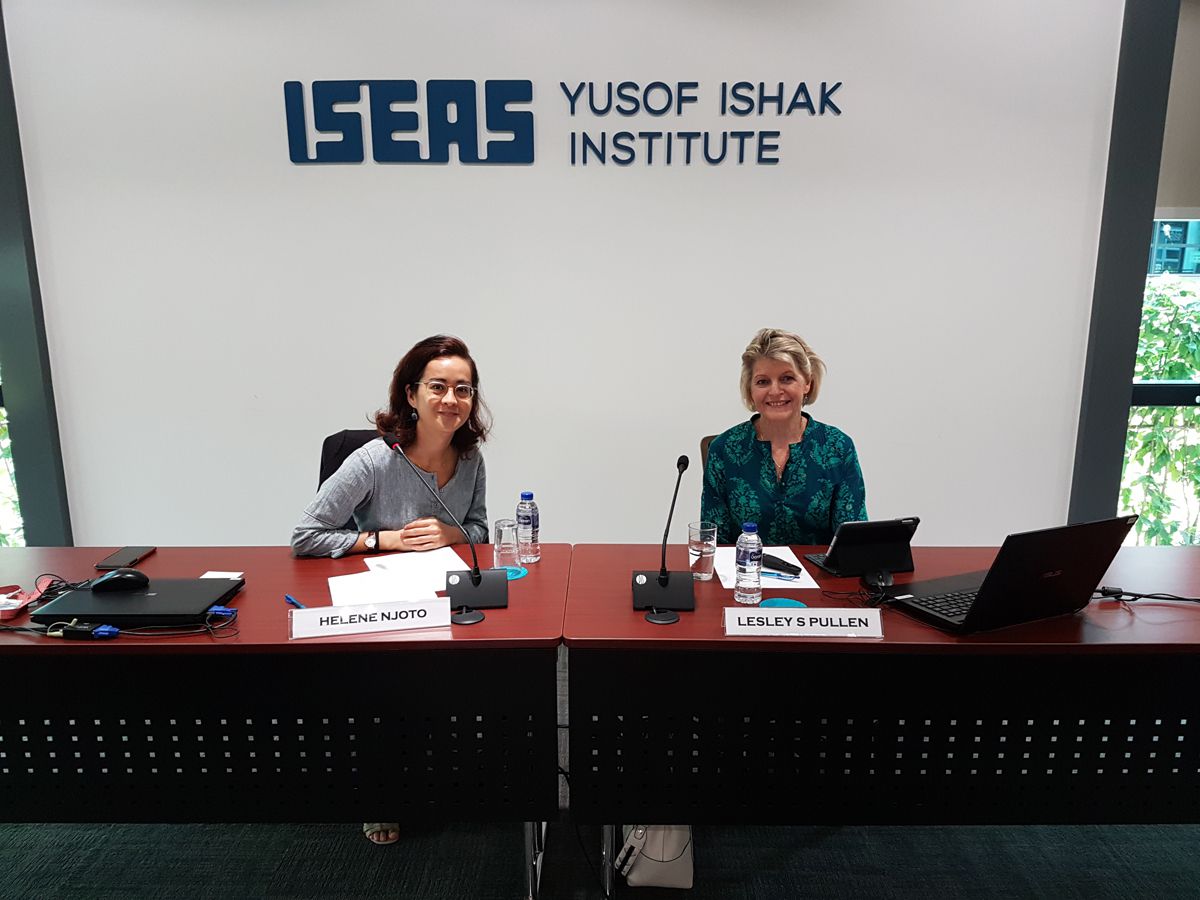 Drawing from a vast range of examples from within and beyond Indonesia and considering supporting evidence from other regions of Asia, Dr Pullen explored the origins of the medieval textiles depicted on these sculptures, or arca, and identified the various types being represented, which marked Central Javanese achievement in statuary. Statues came in two sizes: larger ones meant for temples and smaller ones that could be moved around as objects of reverence and veneration and transported from one country to another. Dr Pullen suggested that this was how styles were shared between Java and empires elsewhere, indicating mutual cultural exchange and echoing Hermann Kulke’s hypothesis of cultural convergence between South and Southeast Asia, and that monetisation was key to the preservation and circulation of statuary and the production of icons, typically involving personal rather than state money. 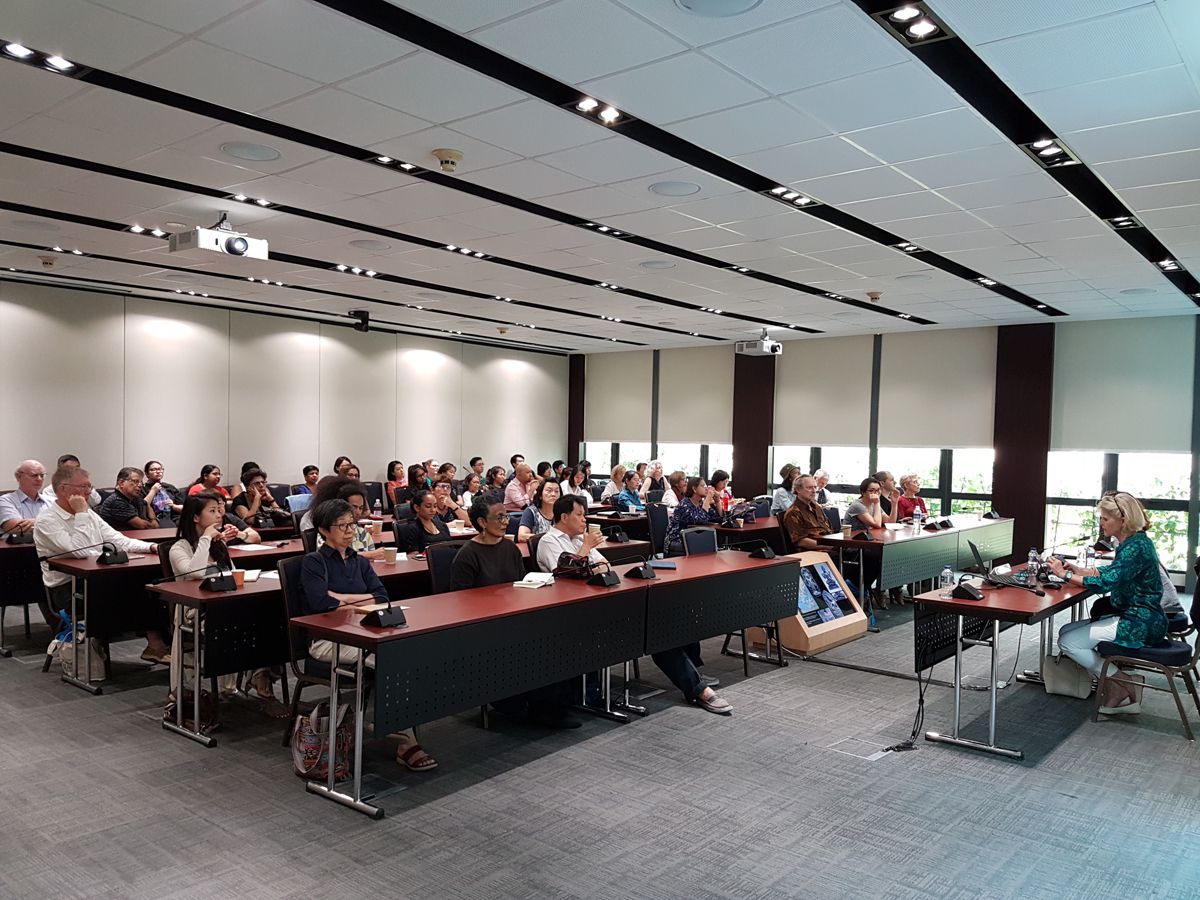 Dr Lesley S Pullen spoke to a full room during her lecture, among established scholars and younger ones (Source: ISEAS – Yusof Ishak Institute).

Dr Pullen also analysed specific motifs, such as those on Saiva Buddha sculptures representing tantric iconography, and the impact of the ‘Pāla Style’ from northeast India on the sculpture of Classical Java. She opined that the famous monk Atiśa could have played a role in cultural transfer when he travelled from that region (Nalanda’s location) to the Sriwijaya Empire and back. Many of the motifs in textiles have a longer global history with links to other civilisations, such as the Sasanian Empire and Yuan Dynasty. The use of the pucuk rebung or tumpal motif on patola fabric also indicates that Indonesians went to Western India with knowledge of their market and ideas for patterns, requesting craftsmen there to incorporate these designs into the pieces to bring home. She posited that many of the statues could be templates for the textile patterns that remain in use today; their history extends further than conventionally assumed. With a discerning eye for layers of often elusive detail in the textile patterns and their subtle variations between different statues, Dr Pullen traced their evolution within a relatively short period, some motifs appearing once then disappearing in Java. Such rich material and sharp analysis led to a convivial question-and-answer session. Dr Pullen elaborated further on the Sumatran contribution to Javanese songket brocade and how Chinese imports showed that the Javanese had the comb-on-the-loom technology for this. After the rise of the Majapahit Empire and subsequent Islamisation, songket became ubiquitous in Malay courts, where previously this type of patterning had appeared to have fallen out of favour, even though Singhasari sculptures in the 13th century bore such designs, albeit with external influences. The discussion also drew possible links with Kalimantan due to similar designs and Hindu-Buddhist activity found among indigenous peoples there in their tattoos, carvings, and fabrics. 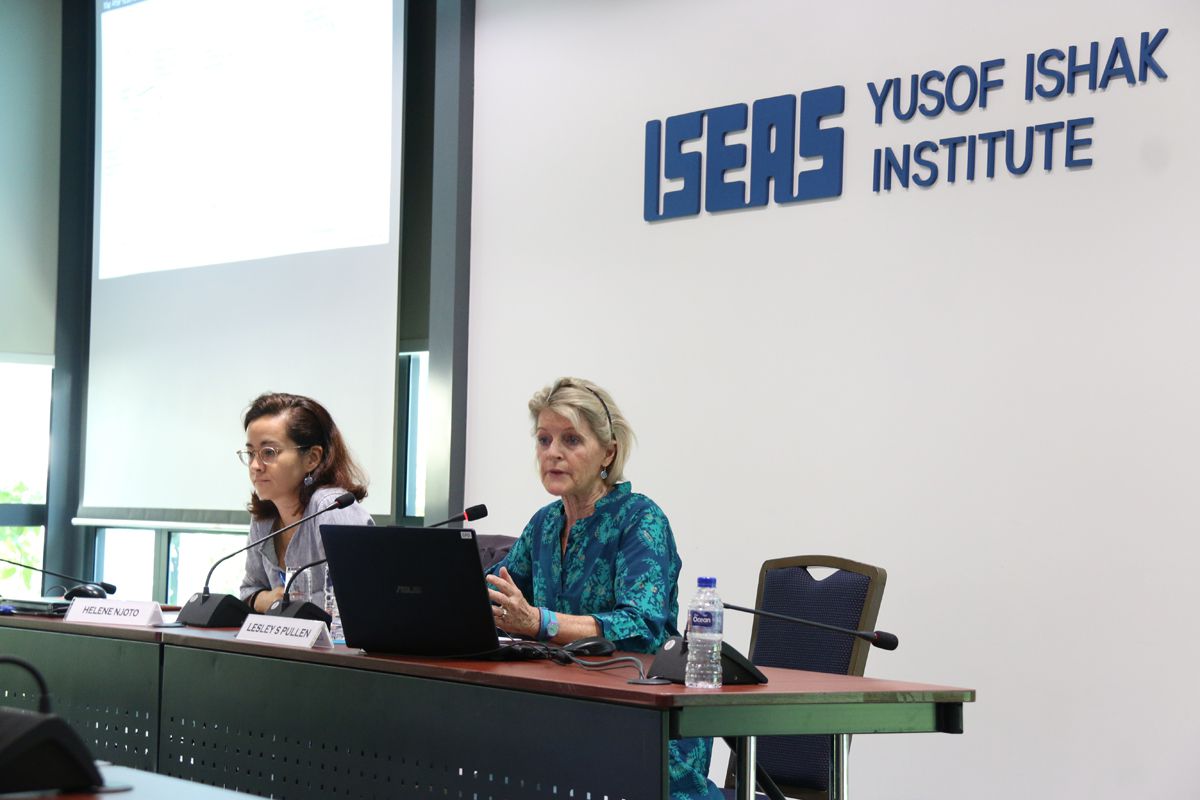 The conversation highlighted some lessons. Firstly, the importance of not underestimating the cultural influence of the Javanese themselves before the Hindu-Buddhist period. Dr Pullen suggested possible Javanese influences from Chola murals, bronzes, and sculptures, and block-printing and woven textiles coming before more complex Coromandel Coast ones. Secondly, that the Javanese took what they liked from what came their way and made it their own, such as the rosette that appears in Chinese Buddhist iconography before this period. Such rich motifs, which even priests or kings would not up, had to be copied from textile models. Lastly, the danger of adopting a singular narrative about the political economy of knowledge production and circulation, so one had to look more closely and carefully: how did Javanese sculptures get such remarkable textile patterns? Where is the inspiration for these designs?