Dr Yahya began with an introduction to calligrams — figurative or pictorial calligraphy where texts are formed into images. These can be found across the world, and can be of any kind of script; in the Islamic world, calligrams tend to be used for devotional and talismanic purposes. Studying calligrams in Islamic Southeast Asia sheds light on the use of images in the region, for instance why certain motifs travel, and why particular images tend to be more prominent in certain areas. 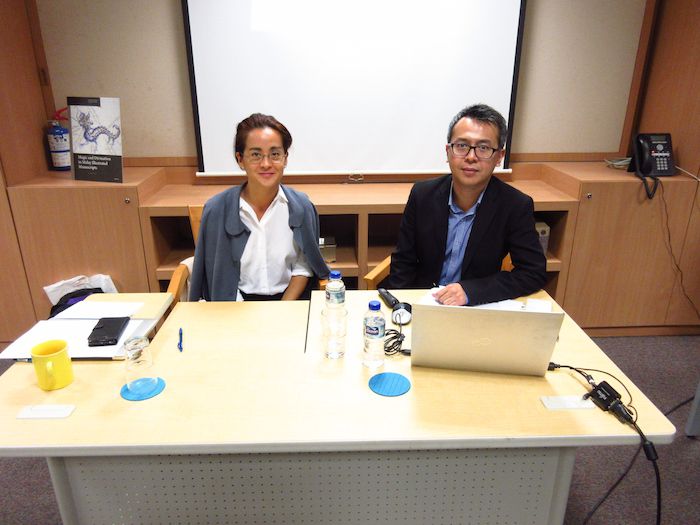 Although there are many types of calligrams in Southeast Asia, those in Arabic script (usually composed of religious phrases and Qur’anic verses) are more characteristic of the region’s Muslim societies. Dr Yahya focused on two prominent ones in particular. The first takes the form of a large feline, which in the Islamic tradition is referred to as the ‘Lion of ‘Ali’ (‘Ali was the Prophet Muhammad’s cousin and son-in-law, who was also known as the ‘Lion of God’). In Southeast Asia, this type of calligram is typically used on royal banners and as talismans for protection and strength.

The second takes the form of ships, which have spiritual connotations in Southeast Asia. One version is composed of the names of the Seven Sleepers of Ephesus (it is believed that writing their names on a ship can prevent it from sinking). Other versions are found at the beginning of books and letters, where the opening phrases (e.g. the basmala) were fashioned into the form of a ship. Dr Yahya posited that Southeast Asian calligrams were derived from other parts of the Islamic world, such as the Ottoman and Persian traditions, but would also have fit in with local beliefs. For example, he notes the conflation between the lion and the tiger in the region, which explains why the Lion of ‘Ali calligram is known as the Tiger of ‘Ali here. He also shared examples of calligrams in other Southeast Asian scripts, such as Javanese and Shan, which indicates that calligrams were a widespread tradition, and he hoped to find more. A lively question-and-answer session followed the lecture, which allowed Dr Yahya to share his thoughts on a number of issues, such as the significance of what is often seen as a Shia Muslim motif (the Lion of ‘Ali) in a region where Sunni Islam dominates, the centres of representation of particular images, the military connotations of certain calligrams (e.g. those with “victory from God”), and how the study of magic and divination can help shed light on contacts between Southeast Asia and other parts of the Islamic world.

In response to other questions from the audience, Dr Yahya also discussed the production of calligrams, the perceived source of the power of talismanic calligrams, and the relation between the image and text (or the lack thereof). He discussed also the difficulty of finding earlier examples from Southeast Asia, how most of the calligrams are composed of statements of faith rather than literary texts, and the Southeast Asian specificity of calligrams in relation to the Islamic world, being more talismanic in nature here.