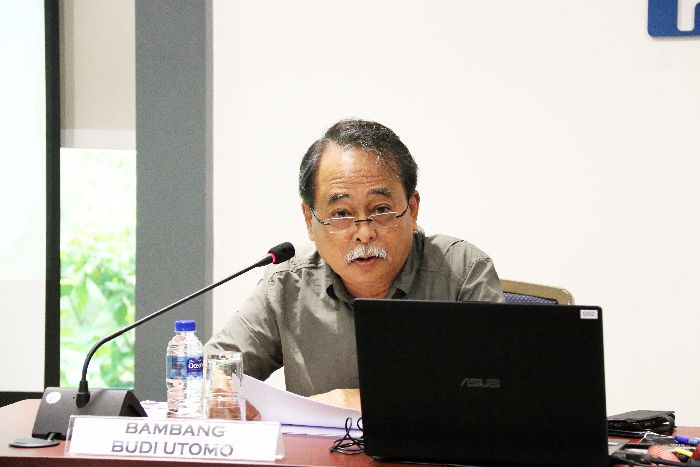 Mr. Bambang Budi Utomo first introduced PUSLIT ARKENAS as one of the oldest centres for archaeological research in Southeast Asia that built up its knowledge on the prehistoric and historic period in Indonesia over 105 years.  He highlighted how the institute had begun on the foundations of the Dutch colonial antiquity service, and how its researchers had made great contributions to the study of both Majapahit and Sriwijaya, among other sites.  Subsequently, four specific sites were showcased in the talk: Harimau Cave (a prehistoric cave in South Sumatra with remains over 4,500 years old); wetland settlement research in southeast Sumatra (an area with artefacts dating from 4th-13th c. in East Sumatra); Liyangan (a 11th c. Pompei-like site in Central Java); and the WWII-era shipwreck of a German U-boat in the Java Sea. Mr. Shinatria Adhityatama then presented data retrieved from Gua Harimau, a prehistoric cave site in South Sumatra near the Ogan River where 81 individuals were found from a wide range of dates, the oldest being over 4,500 years old, and the most recent being about 1,700 years old.  He showed the different types of burials and burial positions that the individuals were found in, and mentioned that there is ongoing research into their disease profiles (whether the individuals suffered from illnesses) as well as the faunal material found at the site.  DNA testing suggests that the individuals found were from mongoloid and australoid populations.  Pottery and stone tools were also found and examined.  Mr. Shinatria emphasised how the site was significant in that it was also the location of the first rock painting found in Sumatra, with approximately 50 different types of motifs.

Next, Mr. Bambang, assisted by Mr. Shinatria as translator, discussed a wetland settlement area on the Musi river drainage basin, on the east coast of Sumatra that may have been inhabited by the people of Sriwijaya, and used data from Air Sugihan, Karang Agung, and Banyuasin areas.  Although the area was initially investigated in the 1980s in conjunction with a team from EFEO, led by Pierre-Yves Manguin, recent discoveries including wooden pillars made out of Nibung trees for stilt house posts, and 4th century Carnelian beads (thought to be from Arikamedu, India), suggest that the Karangagung area had the earliest evidence of contact with India in the Indonesian archipelago.  Furthermore, the remnants of a sewn-plank and lashed-lug boat were found at Banyuasin regency, along with ceramics, clay stoves, beads, and coconut shells, and were most likely evidence of Orang Laut activity.  These groups played important roles in the straits of Melaka and elsewhere, as look outs and navigators (among other roles), leading traders through a maze of mangrove swamps to various ports of trade.

Subsequently, Mr. Bambang discussed recent finds from the Liyangan site, a 2nd-11th c. site dubbed as Asia’s Pompei in Central Java.  The village of Rukam on the slope of the Sumbing Volcano was mentioned in a 907 CE inscription and was destroyed by volcanic eruptions, and in 2008, collapsed buildings were found in Liyangan at a depth of 8-10 meters.  Archaeological investigations were conducted at the site since 2010, and they have found various items related to everyday life in relatively good preservation—such as oil lamps, rope, timber, irrigation systems, and various religious statuary.  The estimated 8-12 hectare site was also investigated for agricultural activities, and its various monumental buildings were considered to be examples of the pre-Hindu and Mataram-era style religious beliefs.

Finally, Mr. Shinatria spoke on the discovery of a German U-Boat in waters at a depth of 18-24 meters, in the Java Sea off the north coast of East Java, Indonesia.  He explained that based on archival research in 2010, there was potential for several German wrecks in the area as the Germans and Japanese were allies in WWII, and were trading technology and other natural resources such as rubber and glass. The PUSLIT ARKENAS team worked with the local fishermen in the area to discover a submarine wreck. The submarine was identified as a German U-Boat from WWII by a stamp on the bottom of a porcelain artefact (from the Porzellanfabrik Joseph Rieber & Co. A.G. which had a Nazi swastika logo).  Documentation of human and uniform remains also revealed the Caucasian and national origins of the crew. The audience: 49 people, including scholars, students, and members of the public attended the lecture (Credit: ISEAS – Yusof Ishak Institute)

Chaired by Dr. Helene Njoto (Visiting Fellow, ISEAS – Yusof Ishak Institute), the 60 min lecture was attended by an audience of 49 people, including scholars, students, and members of the public.  It was followed by a lively 30 min Q&A session in which both speakers answered questions from the audience.  Initially, the questions were focused on the shipwreck; whether the human remains were repatriated; whether international collaborations would allow for more underwater archaeology work; and underwater archaeology regulations.  The speakers also received questions on whether the Mataram period settlement site at Liyangan had influences from earlier traditions.  Other questions addressed the origins of Carnelian beads; whether they might have been circulated from Myanmar instead of India.